The Nets began this N.B.A. season ushering in a new era — and while this year was always expected to be a transition period, the franchise hoped to at least build the foundation of a potential dynasty.

Eight months later, little has gone according to plan.

With about a month to go before the N.B.A. is expected to restart its season at Walt Disney World, the Nets have little more than a skeleton crew to send to play in Florida. Because of injuries, coronavirus infections or concerns over the outbreak, several of the team’s top players have been ruled out of the restart, raising questions about how competitive the team can be when the league returns.

On Monday night, center DeAndre Jordan posted on Twitter that he had tested positive for the coronavirus and would not play in Florida, and guard Spencer Dinwiddie told The Athletic that he had also tested positive for the virus — though Dinwiddie said it was “unclear” whether he would be able to go to Disney World. Wilson Chandler, a reserve forward, told the team he was opting to skip the rest of the season because of virus concerns.

Without Chandler, Jordan and Dinwiddie, who helped provide a spark after the Nets lost Kyrie Irving to a shoulder injury, the club will be left with a roster that includes talented but developing players like Caris LeVert, Jarrett Allen and Joe Harris, and a handful of minimally established players.

Irving and Kevin Durant, the Nets’ two marquee free-agent signings from last summer, are not expected to play, either. In February, the Nets announced that Irving would miss the rest of the season because of an ailing right shoulder that needed surgery. Durant, who tore his Achilles’ tendon just over a year ago, told The Undefeated in June that his comeback would wait until next season.

Nicolas Claxton, a rookie power forward who played sparingly, will not be in Florida, either, after undergoing arthroscopic labrum repair surgery, the Nets announced last week. And, finally, the team announced last week that it had waived the reserve guard Theo Pinson.

The team has moved swiftly to fill some of the holes in the roster, including adding guard Tyler Johnson, who gave the Miami Heat some scoring punch off the bench in his first four seasons but struggled to fit with the Suns since being traded to Phoenix.

The Nets also re-signed Justin Anderson, another reserve forward, who had a 10-day contract with the team in January. The team has until 11:59 p.m. Tuesday to sign any more replacement players, but it currently has a full roster, including players with two-way contracts whom the team was not expecting to have to rely on this late in the season.

Even before the pandemic upended the N.B.A. in mid-March, the Nets’ season was a tumultuous one. On opening night, Irving dazzled by scoring 50 points in an overtime loss to the Minnesota Timberwolves.

But after the team stumbled to a 4-7 start, the injury bug hit: Irving’s shoulder caused him to miss 26 games, and then after a short-lived return, he was ruled out for the season. LeVert, the 25-year-old guard thought to be a foundational piece of the Nets’ future, missed several weeks because of a right thumb injury. And when he played, he didn’t show the growth that many expected from him.

There was Irving-related drama as well. After a January loss to the Sixers, Irving told reporters that the talent deficiency on the roster was “glaring” and that the team needed more pieces.

The most shocking story of the season came in March, when Coach Kenny Atkinson and the team “mutually agreed to part ways” and Jacque Vaughn was named interim coach.

Atkinson had been in his fourth year as the Nets’ coach and had a strong reputation around the league for getting the most out of players on his team. In the first three years of his coaching tenure, the Nets’ win total rose each season.

Four days after Atkinson stepped down, the N.B.A. season was postponed. The Nets last played on March 10 against the Los Angeles Lakers: Chandler, Jordan and Dinwiddie all started that game. 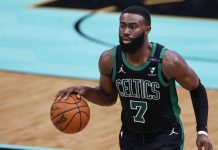 Celtics' Jaylen Brown out for season with torn ligament in wrist 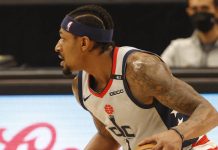 Wizards star Bradley Beal to be reevaluated on Friday 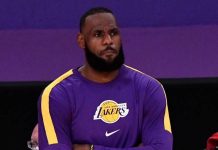 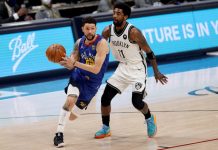 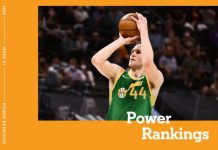 NBA Power Rankings: How good are the Utah Jazz? Plus, it’s time to hold myself accountable for preseason predictions 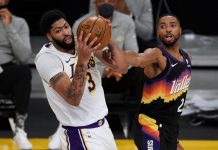 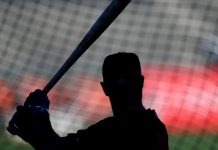 A startup thinks it can do analytics better than any one team — in MLB, soccer and, soon, the NBA 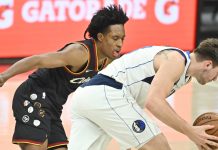 Luka Doncic gets ejected for groin shot on Collin Sexton 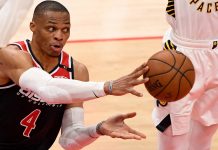 The 'Most career triple-doubles' quiz 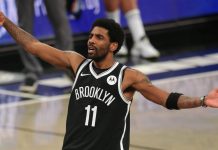 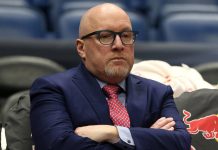 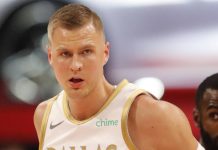