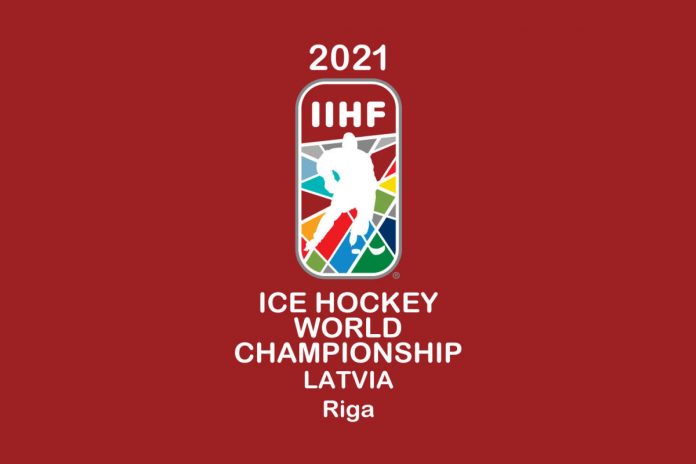 Norway Was Close, But USA Holds On

It was likely too close for comfort for an American team that expected an easier victory, just edging out Norway by a score of 2-1.

USA will hold on to top spot in Group B with 12 points, with all four of the team’s wins coming in regulation. Norway will not advance to the quarter-finals after recording just five points through six games, with just one left to go.

One of USA’s top players in the tournament, Conor Garland, would make it 1-0 on the power play at 10:30. Zac Jones would take a shot from the point but Garland was there to finish it off, scoring the only goal in the first period. It was almost 2-0 early in the second period when Garland was able to knock the puck in over the line. Emil Lilleberg blocked the shot with his skates but eventually fell in, but the whistle came and called the play off.

That didn’t stop USA from scoring next when, at 7:12, Ryan Donato lost control of the puck on the rush into the slot, but Tage Thompson was there to get the second chance and made it 2-0. It was a lead that looked stable until there were just six minutes to go in the game. Ken Andre Olimb broke Jake Oettinger’s shutout late after stealing the puck off of a bounce off an American defender and beat an unsuspecting Oettinger blocker side to make it 2-1. Norway was unable to capitalize on the late goal and stayed doormat the rest of the way, allowing USA to leave with the win.

It didn’t fully go to plan, but in the end, Finland won’t care how it won on Saturday, beating Germany 2-1 to continue its run as a favorite to win gold.

With the win, Finland takes back control of first place in Group B with 13 points in five games. The Finns have two games remaining against Latvia and Canada, two teams trying to find one of the final playoff spots. Germany, meanwhile, didn’t benefit from the game, failing to distance itself from Latvia (one point behind) or Canada (three) with two games to play.

At 6:17 on the man advantage, Anton Lundell opened the scoring after Tony Sund found him standing all alone to the left of German goaltender Mathias Niederberger. Lundell’s shot whizzed in with no interruptions to make it 1-0 in a great start for the Finns.

Despite taking just four shots through 27 minutes of play, Germany was able to tie it up. Korbinian Holzer, a stay-at-home blueliner with six goals in 206 career NHL games, was able to stake in and beat Jussi Olkinuora glove side after the Finnish netminder moved his glove out of position just as the shot was taken.

But Germany couldn’t build off the momentum, taking just one shot for the remainder of the period. Instead, Lundell would get another point after he set up Arttu Ruotsalainen alone in front of the net for the 2-1 goal with nine minutes to go. Germany would play some of its best hockey of the evening after that point, but Jussi Olkinuora shut the door in the final minutes of play to win the game.

The score may have indicated one thing, but the game was definitely closer as Russia was able to beat Switzerland 4-1 on Saturday to retain the top spot in Group A.

The score was just 1-1 after 50 minutes of play, with Russia having an overall shot advantage of 26-23.

It took 35:01 for the first goal to go in as Anton Burdasov skated in with speed and beat Reto Berra’s blocker. At 48:12. Nico Hischier scored his first of the tournament after Andres Ambuhl spun around a defender and got the pass to the New Jersey Devils star standing all alone.

But a late-game spree put Russia up ahead by too much for Switzerland to battle back. Pavel Karnaukhov grabbed the 2-1 goal from just in front of the net after Sergei Tolchinsky made a pass from his knees to Pavel Karnaukhov. Karnauhkov was able to put the puck under Berra’s left arm and in to make it 2-1 at 50:26. Tolchinsky would get a couple goals to end the game in a great final few minutes for Russia, beating out a Swiss team that many expect to be a factor in the medal round.

Kazakhstan Explodes for Massive Second Half Against Italy

It was 1-1 at the halfway point of the game, but that’s when everything began to get nutty as Kazakhstan was able to prevail by a massive 11-3 score on Saturday afternoon.

Kazakhstan was able to take third place in Group B with the win, advancing over Germany. Kazakhstan’s final game is against Norway, a team Kazakhstan should have an advantage against. A win there would go a long way, especially with Canada set to face off against Finland on the final day and holding a tiebreaker agaisnt Kazakhstan if the two finish with the same number of points.

The star of the show was Roman Starchenko and his five points. He scored the opening goal of the game seven seconds into a power-play opportunity at the 2:12 mark of the first after receiving a pass while skating in all alone.

The lead would last for over a period until Anelo Micelli outlasted Nikita Boyarkin on a good scoring chance to tie the game up, putting Kazakhstan on its heels in a game it needed to win.

But that’s when things started to get a little bit goofy. Yegor Petukhov and Yevgeni Rymarev both scored to make it 3-1 at the end of the second period, forcing Italy to do something it had yet to do: force any kind of comeback. From there, Nikita Mikhailis scored a power-play goal for Kazakhstan at 1:31 in the third, with Peter Hochkofler answering back 12 seconds later.

Alex Petan scored just past the halfway part of the third period, but Kazakhstan combined for seven goals in the final 14 minutes of play in a game that completely fell apart for Italy.

When it was all said and done, Starchenko had five points, Curtis Valk had four points and Artyom Likhotnikov recorded three. Nine different Kazakh players registered goals with nearly every skater having at least one point.

The Czech Republic’s late-tournament bid to earn a quarter-final spot continues with a 6-1 win over Great Britain.

With the victory, the Czech Republic was able to hold on to fourth place in Group A with two games to go, but with the battle raging close between the bubble teams in the group, it’s expected that the final placements will go down to the wire.

The Czechs weren’t able to score on a slew on power plays to start the game, but they still managed to score early in the first. At 8:01, Lukas Klok’s shot through traffic beat a screened Jackson Whistle to make it 1-0.

It was the only goal of the first, but three unanswered markers in the second put the game out of reach for GB. Filip Hronek got the ball rolling 33 seconds into the frame off of a feed from Detroit Red Wings teammate Filip Zadina, and Libor Sulak scored four minutes later to make it 3-0.

Filip Chytil would score at 32:07 to finish his team’s second-period assault before Matthew Myers eked one in on the power play from a play started by Liam Kirk, but it was GB’s only goal of the game. Radan Lenc added his first of the tournament at 51:33 and Sulak scored his second of the game with two minutes to go in the battle, with both beating Ben Bowns in a relief effort to finish off the game.

The game needed 47 minutes to find a goal-scorer, but Slovakia was able to beat Denmark 2-0 to put them in a tie with Russia at the top of Group A with 12 points.

Slovakia moves to second in the Group, taking away momentum from a Danish team that’s died with the Czech Republic for the fourth spot, with the Czechs holding the tie-breaker at the moment.

The goaltenders at both ends were the highlight of the game. Sebastian Dahm stopped 32 of the 34 shots sent his way for Denmark, while Slovakia’s Julius Hudacek was perfect with a 24-save shutout, including some desperate attempts late by Denmark.

Slovakia’s goal-scorers were Peter Cehlarik at 47:13 and Adam Janosik at 52:25. The first goal sparked a Slovak attack, with Denmark trying to chase, but not getting good enough chances on Hudacek. The second goal put the Danes in a tough spot they couldn’t come back from, despite a couple of late chances.

1. Roman Starchenko, F (KAZ): FIVE points in the best individual effort of the tournament. He’s been good throughout, but this was icing on the cake.

2. Sergei Tolchinsky, F (RUS): Two goals and an assist in the final 10 minutes was the difference in helping Russia beat Switzerland.

3. Julius Hudacek, G (SVK): In a game that Slovakia seemed outmatched, Dahm did everything he could to give his team a fighting chance. 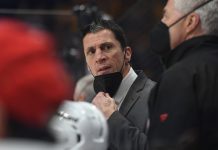 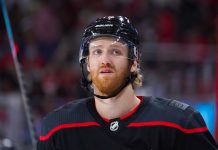 Will the Flyers Pass on Dougie Hamilton? 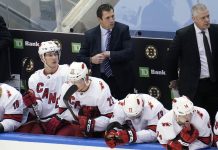 Brind'Amour: "We Still Have Another Level" 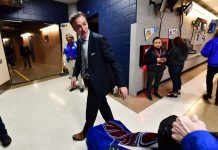 What Should Joe Sakic do to Get Avalanche Over the Hump? 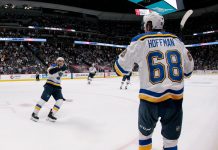 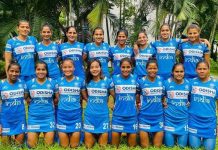 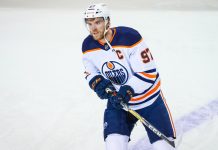 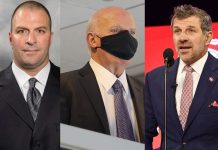 Bergevin, Lamoriello, Zito Named Finalists for GM of the Year 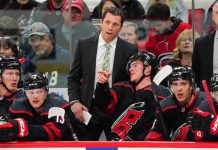 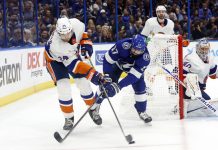 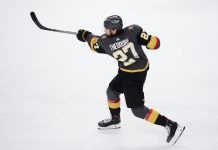 Offense from Defense a Key Factor in Stanley Cup Semifinals