Why Wall Street should worry about the debt ceiling

Markets might not show it yet, but there is growing concern among financial giants that the upcoming debt ceiling fight between conservative Republicans and the Biden administration poses a real threat to the economy.

For those like Elliot Hentov, head of policy research at State Street Global Advisors, it’s a realization that the incentives for a crisis are high, with no obvious scenario where conflicting sides will back down. Conservative GOP lawmakers who want spending cuts are emboldened after Kevin McCarthy’s speaker election, while Democrats and a number of moderate Republicans are resisting attempts to hold the U.S. debt limit hostage. The “X date” for when the federal government won’t be able to pay its bills is uncertain but is estimated to happen around the middle of the year.

It’s unlikely the U.S. will miss a debt payment, Hentov told MM. But he sees a real risk — unlike in past debt ceiling brawls — that the standoff will last so long that the Biden administration will be forced to use murky legal maneuvers to keep paying the government’s bills, casting uncertainty over a bedrock element of the global financial system. (The White House has said it’s not considering measures to go around Congress, like minting a $1 trillion coin or invoking the 14th Amendment.)

Hentov’s concern is that unexpected dominoes may fall like they did during September’s U.K. financial crisis, when a dramatic tax-cutting proposal by the Truss government triggered a hike in bond yields and blew up pension funds.

“In all the previous debt ceiling episodes, I always felt like at the end of the day, I understood the need for the theatrics, but I could see a landing zone for how it gets resolved,” said Hentov,who worked on the S&P sovereign ratings team when the firm downgraded the U.S. in 2011. “Here, I don’t see that yet, and it makes me quite uncomfortable.”

What to watch — Given the political constraints, Hentov said he expects markets will start reacting to a potential debt ceiling breach earlier than in the past, probably two months out from any deadline that Treasury Secretary Janet Yellen indicates to Congress. Look for a letter from Yellen to lawmakers in the near future.

Market turbulence could come in the form of rising interest rates for Treasury securities that mature around the deadline. A spike in short-term rates would make borrowing across the economy more expensive.

Why PIMCO is optimistic — Libby Cantrill, head of public policy at bond trading giant PIMCO, told MM that the firm is not significantly more worried about a debt ceiling breach than it was before the speaker election drama.

PIMCO believes there will be enough votes for a “clean” debt ceiling increase thanks to support from Democrats and some moderate Republicans. A so-called discharge petition would be a last resort to force a House vote even if McCarthy refused to bring up a bill.

“For the market’s purposes, as long as there is that release valve – a mechanism to force a clean debt ceiling increase – we are not exceedingly concerned about the chances of a default,” Cantrill said.

An estimated one in five seniors is a victim of financial exploitation, costing an average of $120,000 per person — and adding up to billions of dollars lost annually. Thanks to the ABA Foundation’s Safe Banking for Seniors program and other industry initiatives, banks across the U.S. are protecting seniors from scams and fraud. Learn more.

… Bank of Finland Governor Olli Rehn speaks at a Peterson Institute virtual event at 9 a.m. … Lawmakers organize in the House

— The deal McCarthy struck last week with ultraconservatives doesn’t require a specific level of cuts to be attached to a debt-ceiling increase, offering some flexibility to Congress.

— Yellen has agreed to stay at Treasury for the next two years.

— Senior Republicans on the House Financial Services Committee told POLITICO’s Eleanor Mueller that Congress will find a way to raise the debt limit.

— Rep. French Hill said Wall Street shouldn’t be worried. “We’re going to work out a good plan for that when the time is right.” He added: “You don’t need Wall Street upset.”

— Rep. Frank Lucas: “I believe we can get there. I’m not sure in what form yet that will be.”

— Rep. Pete Sessions: “It’s up to the majority party to pass these things. And so we’re going to have to come up with a plan that we agree on — and we can.”

The House takes aim at China with new committee — The House voted 365-65 to set up a select committee that will investigate the military, economic and technological challenges posed by China.

Katie Porter’s anti-Wall Street Senate campaign — The California Democrat touted her tough questioning of big banks and her support for a congressional stock trading ban in an announcement that she’ll run for Senate in 2024.

Porter is the least of the banks’ worries, if these developments are any indication —

— Wells Fargo steps back from housing — Wells is relinquishing its once-leading role in the U.S. mortgage market because of regulatory pressure and rising interest rates. CNBC reports that the bank “will now offer home loans only to existing bank and wealth management customers and borrowers in minority communities.”

— Goldman Sachs begins major layoffs — The investment bank this week will start one of its biggest round of firings since the financial crisis as it aims to trim 3,200 jobs.

— Bank investors see good times ending — Big banks are expected to report more profits from a Fed-driven lending windfall, but investors and analysts warn that the companies will soon face pressure to pay more on deposits.

Powell wants to limit the Fed’s climate role — Our Victoria Guida reports that Federal Reserve Chair Jerome Powell is pushing back on pressure to use the Fed’s powers to fight climate change. He made the point during a panel in Sweden on central bank independence.

“[W]ithout explicit congressional legislation, it would be inappropriate for us to use our monetary policy or supervisory tools to promote a greener economy or to achieve other climate-based goals,” he said. “We are not, and will not be, a ‘climate policymaker.’”

A message from American Bankers Association: 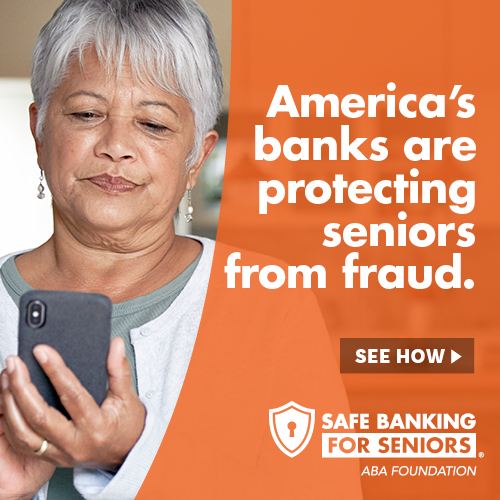 Coinbase gets boost after layoffs news — Coinbase’s stock price rose by almost 13 percent Tuesday after the crypto exchange announced plans to lay off nearly 1,000 people. Coindesk reports that Wall Street analysts reacted positively to the news as an indication of financial discipline during the crypto crash.

A challenge to the conventional wisdom on inflation— Josh Bivens in the American Prospect: “[T]here is plenty of evidence that recent inflation has not been driven simply by … macroeconomic overheating … . An alternative account of this inflation centers the importance of huge economic shocks from the Covid-19 pandemic and the Russian invasion of Ukraine, and traces out the ripple effects in labor markets that have stemmed from these shocks.”

Older Americans hold approximately 65% of bank deposits in the U.S., and criminals see this as an opportunity for financial exploitation. America’s banks are fighting back to protect seniors and their money. Through the ABA Foundation’s Safe Banking for Seniors program, banks of all sizes help older adults, their families and financial caregivers understand and mitigate the risks of elder financial exploitation. Learn more about how banks are safeguarding America’s seniors.