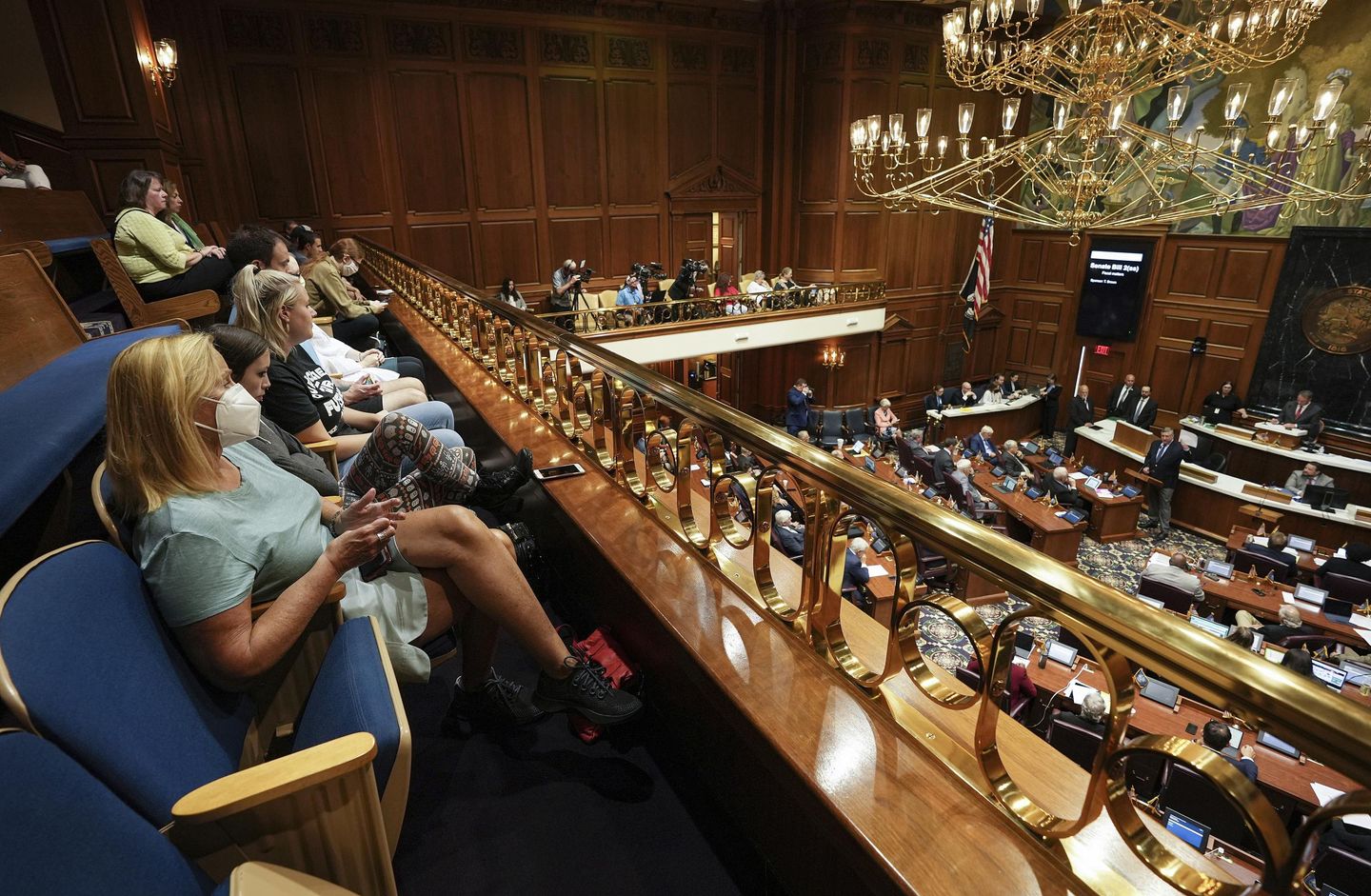 The White House on Saturday called Indiana’s near-total ban on abortion “devastating” and demanded that Congress act immediately to restore nationwide protections for the procedure in the wake of the Supreme Court’s recent decision to overturn Roe v. Wade.

Indiana on Friday became the first state in the nation to approve abortion restrictions since the Supreme Court’s June ruling that removed constitutional protections on abortion, as the Republican governor quickly signed a near-total ban on the procedure shortly after lawmakers approved it.

White House press secretary Karine Jean-Pierre called Indiana’s decision “another radical step by Republican legislators to take away women’s reproductive rights and freedom, and put personal health care decisions in the hands of politicians rather than women and their doctors.”

“Yesterday’s vote, which institutes a near-total abortion ban in Indiana, should be a signal to Americans across the country to make their voices heard,” Ms. Jean-Pierre said in a statement. “Congress should also act immediately to pass a law restoring the protections of Roe – the only way to secure a woman’s right to choose nationally.”

Indiana’s ban, which takes effect Sept. 15, includes some exceptions. Abortions would be permitted in cases of rape and incest, but only before 10 weeks post-fertilization; to protect the life and physical health of the mother; and if a fetus is diagnosed with a lethal anomaly. Victims of rape and incest would not be required to sign a notarized affidavit attesting to an attack, as had once been proposed.

Under the new law, abortions can be performed only in hospitals or outpatient centers owned by hospitals, meaning all abortion clinics would lose their licenses. A doctor who performs an illegal abortion or fails to file required reports must also lose their medical license — wording that tightens current Indiana law that says a doctor “may” lose their license.

“I am personally most proud of each Hoosier who came forward to courageously share their views in a debate that is unlikely to cease any time soon,” Gov. Eric Holcomb said in the statement announcing that he had signed the measure. “For my part as your governor, I will continue to keep an open ear.”

His approval came after the Senate approved the ban 28-19 and the House advanced it 62-38.

Indiana was among the earliest Republican-run state legislatures to debate tighter abortion laws after the Supreme Court ruling in June that removed constitutional protections for the procedure. But it is the first state to pass a ban through both chambers, after West Virginia lawmakers on July 29 passed up the chance to be that state.

“Happy to be completed with this, one of the more challenging things that we’ve ever done as a state General Assembly, at least certainly while I’ve been here,” Senate President Pro-Tem Rodric Bray told reporters after the vote. “I think this is a huge opportunity, and we’ll build on that as we go forward from here.”

Sen. Sue Glick of LaGrange, who sponsored the bill, said that she does not think “all states will come down at the same place” but that most Indiana residents support aspects of the bill.

Some senators in both parties lamented the bill’s provisions and the impact it would have on the state, including low-income women and the health care system. Eight Republicans joined all 11 Democrats in voting against the bill, though their reasons to thwart the measure were mixed.

“We are backsliding on democracy,” said Democratic Sen. Jean Breaux of Indianapolis, who wore a green ribbon Friday signifying support for abortion rights, on her lapel. “What other freedoms, what other liberties are on the chopping block, waiting to be stripped away?”

Republican Sen. Mike Bohacek of Michiana Shores spoke about his 21-year-old-daughter, who has Down syndrome. Bohacek voted against the bill, saying it does not have adequate protections for women with disabilities who are raped.

“If she lost her favorite stuffed animal, she’d be inconsolable. Imagine making her carry a child to term,” he said before he started to choke up, then threw his notes on his seat and exited the chamber.

Republican Sen. Mike Young of Indianapolis, however, said the bill’s enforcement provisions against doctors are not stringent enough.

Such debates demonstrated Indiana residents’ own divisions on the issue, displayed in hours of testimony lawmakers heard over the past two weeks. Residents rarely, if ever, expressed support for the legislation in their testimony, as pro-choice supporters said the bill goes too far while pro-life activists expressed it doesn’t go far enough.

The debates came amid an evolving landscape of abortion politics across the country as Republicans face some party divisions and Democrats see a possible election-year boost.

Republican Rep. Wendy McNamara of Evansville, who sponsored the House bill, told reporters after the House vote that the legislation “makes Indiana one of the most pro-life states in the nation.”

Outside the chambers, pro-choice activists often chanted over lawmakers’ remarks, carrying signs like “Roe roe roe your vote” and “Build this wall” between church and state. Some House Democrats wore blazers over pink “Bans Off Our Bodies” T-shirts.

Indiana’s ban followed the political firestorm over a 10-year-old rape victim who traveled to the state from neighboring Ohio to end her pregnancy. The case gained attention when an Indianapolis doctor said the child came to Indiana because of Ohio’s “fetal heartbeat” ban.

Religion was a persistent theme during legislative debates, both in residents’ testimony and lawmakers’ comments.

In advocating against the House bill, Rep. Ann Vermilion condemned fellow Republicans who have called women “murderers” for getting an abortion.

“I think that the Lord’s promise is for grace and kindness,” she said. “He would not be jumping to condemn these women.”

• This article was based in part on wire service reports.