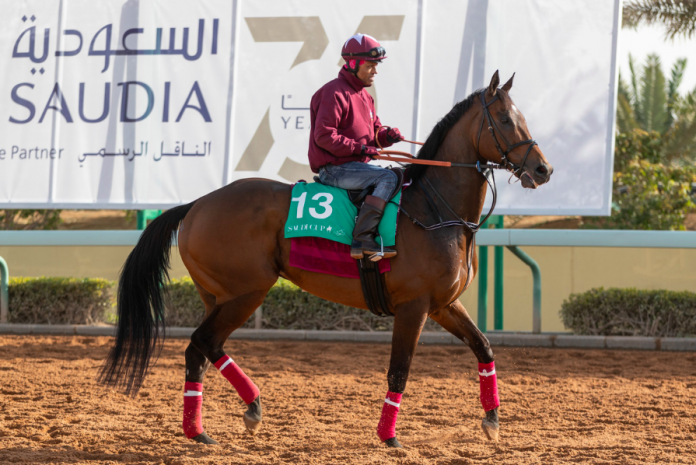 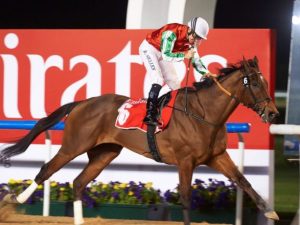 Seven wins in 13 starts later over the same track, the 8-year-old gelding has his connections hoping for a huge score on dirt at King Abdulaziz Racecourse in Riyadh, Saudi Arabia, in Saturday’s $20 million Saudi Cup.

Trained by Dubai-based Satish Seemar, North America was part of a thrilling three-horse photo finish in the Al Maktoum Challenge Round 1 (G2) on Jan. 9. Kimbear was declared the winner, Secret Ambition second and North America third.

It was North America’s first horse racing start in 10 months, when he was sent off as the 3-1 favorite in the $12 million Dubai World Cup (G1) and finished a disappointing seventh after tiring in the stretch. A year earlier, North America finished 10th in the World Cup; and the year before that he ran 10th in the Godolphin Mile (G2).

While most of his seven victories did not occur against the kind of competition the son of Dubawi faced in the World Cups (although he did beat Thunder Snow in 2018 in Round 3 of the Al Maktoum Challenge), North America is back again to take on some of the world’s top horses going 1 1/8 miles.

There is some optimism, perhaps, if North America doesn’t have any foot issues like he did in his last two starts.

“He ran a super horse race, but unfortunately he did the same thing he did in the (Dubai) World Cup; where he ripped a patch of his foot and it’s bleeding pretty badly,’’ regular rider Richard Mullen said after the close call in January. “I thought he got tired, but it was his foot and it was sore. That’s the down side to him; he has bad feet. Hopefully we can patch him up and come back with him.”

“Veteran of multiple Maktoum Challenge races in Dubai and has won his share; but loses big when bumped up in class against this kind of competition.” – Noel Michaels

Sameer says, “He’s been a great horse for us at Zabeel and he’s won all three legs of the Maktoum Challenge at Meydan; so we are taking our best horse to Saudi Arabia. It’s very special for us.’’…

Depending on the outcome, North America could run next in either the Dubai World Cup for a third time or the Godolphin Mile for a second time next month…

In his first six races, North America was 0-for-5 on grass, and 0-1 on a synthetic surface…

In 1993, Sameer became the first UAE-based trainer to win a race in Europe (Dayflower in the Middleton Stakes at York).

Register for an account with UsRacing.com, grab a substantial welcome bonus, and get your Saudi Cup Betting Odds North America now!

Register for an account with UsRacing.com, grab your welcome bonus, and get your action with the best Saudi Cup Betting Odds North America now!

What Goes Around: After Kentucky Derby DQ, Prat And War Of Will Meant For Each Other

Gulfstream Park Purses To Get 10-15 Percent Boost In June

Double-Decker Trailers May Finally Be Banned For Equine Transport

Smith: Honor A. P. ‘Only 75 To 80 Percent’ In San Felipe, Can Turn Tables On Authentic In Santa Anita Derby

Breeders’ Cup Presents Connections: ‘You Try To Be The Best Version Of Yourself’