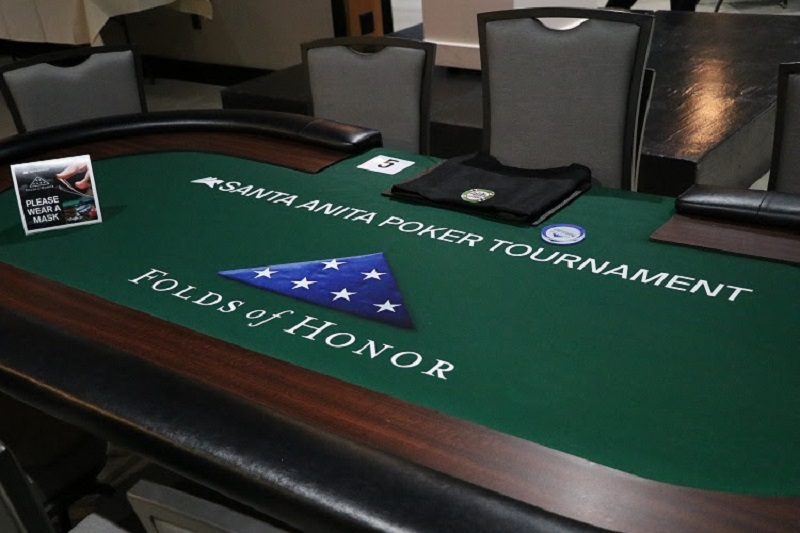 In an effort to support families of fallen or disabled American military veterans, Santa Anita will host a charity poker tournament following the races Sunday at 5:45 p.m. (PT) to benefit the world-renowned “Folds of Honor” Foundation.

The tournament will be staged near the top of the stretch in Santa Anita’s Baldwin Terrace Conference Room on the second floor of the Grandstand. Players will make a $30 charitable donation and be treated to a full night of no-limit Texas Hold ‘Em as well as a day at the races in Santa Anita’s Stretch Run Suites.

“We had great participation from horsemen and fans this past October and we’re hoping to do even better this Sunday,” said Santa Anita Vice President and General Manager Nate Newby. “Memorial Day weekend is a time for reverence for millions of veterans and we’re proud to be able to honor them and their families.”

The $30 donation enables fans to receive an iconic “The Shoe Wants You” T-shirt, the image of which was originally used on a color poster honoring legendary Hall of Fame jockey Bill Shoemaker more than 50 years ago.

In addition to the T-shirt, the $30 donation also includes admission, program, General Parking and a Challenge Coin featuring the Folds of Honor Foundation and Santa Anita Park. The Coin may also be purchased separately for a $10 donation.

“The folded flag is to honor those who have paid the ultimate price for our freedom,” said Folds of Honor Senior VP and former Tehran hostage POW Rocky Sickmann. “It inspires us to help equip and educate their loved ones in need of our support.

“Thank you to Santa Anita Park for embracing the call by honoring their sacrifice.”