Deandre Ayton may have played his last game with the Phoenix Suns on Sunday when he was on the court for just 17 minutes in a 123-90 Game 7 loss to the Dallas Mavericks.

The 2018 first overall pick is set to become a restricted free agent this offseason and there is reportedly no shortage of teams interested in acquiring Ayton as a free agent or via trade.

“It’s going to be, really, one of the stories of this offseason because Deandre Ayton — there are a lot of teams lining up to figure out, ‘How can we acquire him?'” ESPN’s Adrian Wojnarowski reported Monday.

Ayton, 23, reportedly wanted a maximum contract extension last offseason, but was rebuffed by the Suns, who couldn’t reach an agreement with the center ahead of the deadline for a rookie extension.

Wojnarowski said Monday that Ayton “did not feel valued” by the team heading into the season and the Game 7 loss likely didn’t help.

Suns coach Monty Williams said the decision to have Ayton on the floor for just 17 minutes was “internal,” and Ayton was spotted on the bench appearing to say, “I can’t pass myself the ball.” 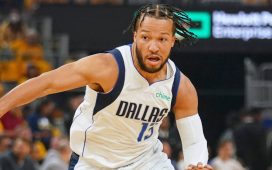 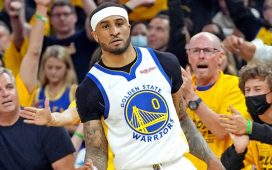