Ranking LeBron James’ sneakers: From the Air Zoom Generation to the XXs


LeBron James entered the NBA in 2003 with the most expectations in decades.

What also came with James at the time was a groundbreaking shoe deal — seven years for $90 million, which seemed wild to many then. James was coming to the NBA straight out of high school. Did an 18-year-old James warrant a shoe deal worth more than some players had made in their careers? Was Nike staking way too much on a kid from Akron, Ohio?

The answer, of course, was no.

James now is in his 20th season and is one of the greatest players the game has seen. His shoe line has been a staple of Nike’s for years. The LeBron XX, celebrating Year 20, have been out for weeks, and photos of the Christmas version have leaked. They are considered by some as one of the cleanest versions of his signature line.

The Nike-James partnership has not only produced his signature shoe but also the LeBron Soldier editions, which could have their own ranking. A bunch of straps on shoes aren’t my thing, but the LeBron Soldier 10 is an exception and one of my favorite Nikes. There’s also the LeBron Witness line. And none of that includes the apparel that has helped make James and his Nike products some of the most recognizable in the basketball world.

Today, we’ll focus on his signature series for this look at two decades of sneaker relevancy. And today, I’m ranking my favorite LeBrons. They’ve been among my favorite signature shoes because they’re among the most comfortable around, and they’re designed to withstand the speed and force James plays with.

The LeBron line offers some of the most unique colorways, so you really can’t go wrong there, for the most part. That being said, here are my top 20 LeBrons.

Nike took a dive into the Foamposite world with this version. It just didn’t hit the mark with me. It’s the first LeBron to feature Air Zoom cushioning throughout the sole.

Another shoe with a strap that just didn’t work for me. Definitely more of a hoop shoe than a fashion shoe. 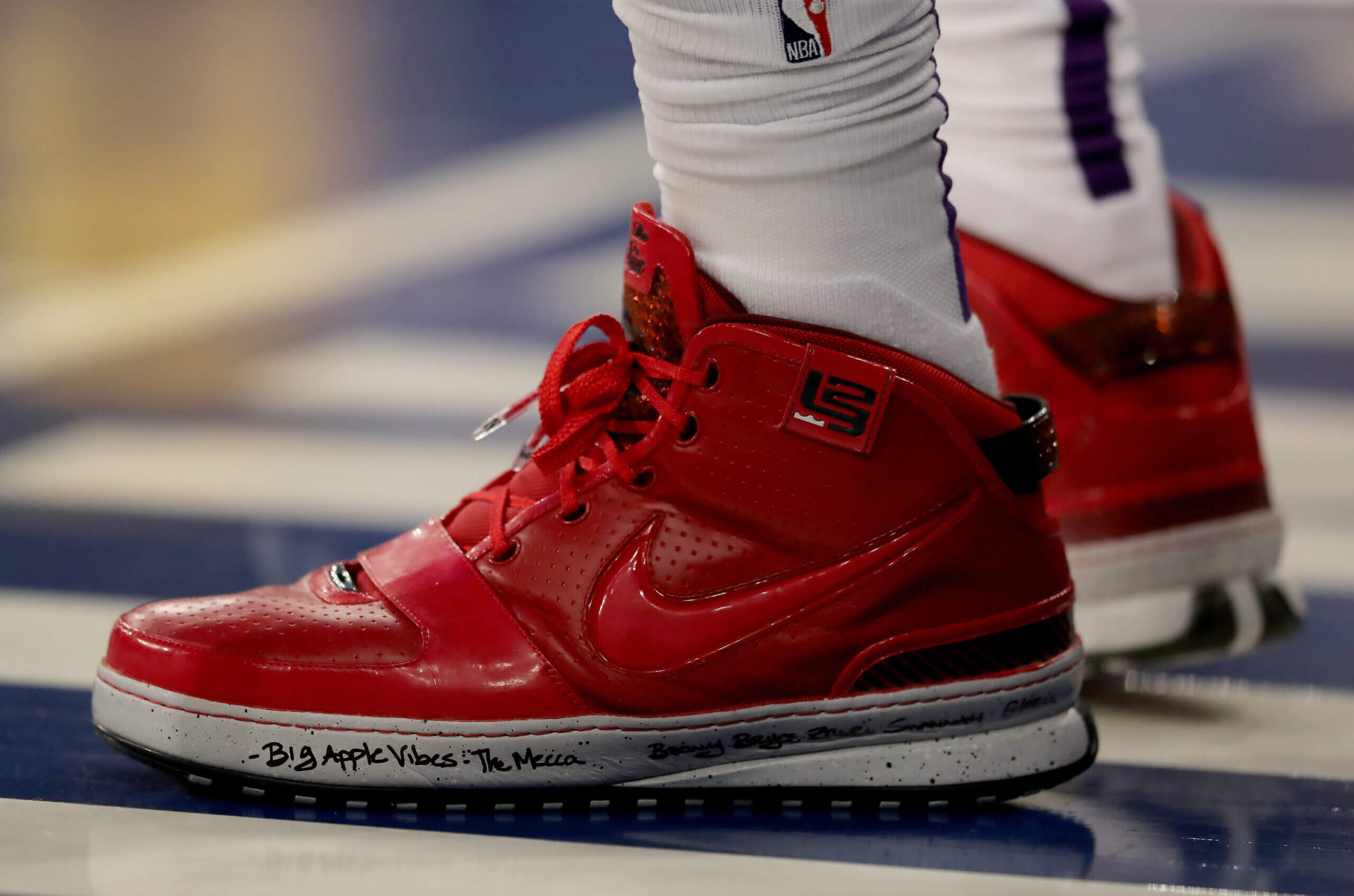 James wore the LeBron Zoom 6 in 2020 against the Knicks at Madison Square Garden. (Elsa / Getty Images)

Similar to the LeBron 3, it’s one of the cleaner designs without the extras. If you like flashy, this might not work as well.

We get the 360-degree visible Max Air unit combined with the Zoom Air unit. Comfort and cushion remain at the forefront.

Another with the strap: This time it’s lower, but it’s not terrible. The strap and air pods provide cushioning and stability.

I’m usually not a fan of Velcro straps, but it’s fine when it’s across the top like this early design. It’s built for power, like LeBron’s game.

Another design that allows for creative colorways because of its unique construction.

“It’s about damn time!” LeBron won his first championship wearing this shoe. It has Hyperfuse and Flyknit, the first shoe to combine both.

This shoe is like a hybrid of speed and power. The Max Air and Zoom Air bags are combined. It works well.

Plenty of cushion with this shoe, and the Knitposite design (the next step up from Battleknit, which was an evolution of Flyknit) provides for some fun designs. My favorite is the “More Than an Athlete” version.

This design allowed for some flashy colorways. The bright and metallic combos work well. In addition to Flywire, Lunarlon cushioning and carbon fiber helped with this design. 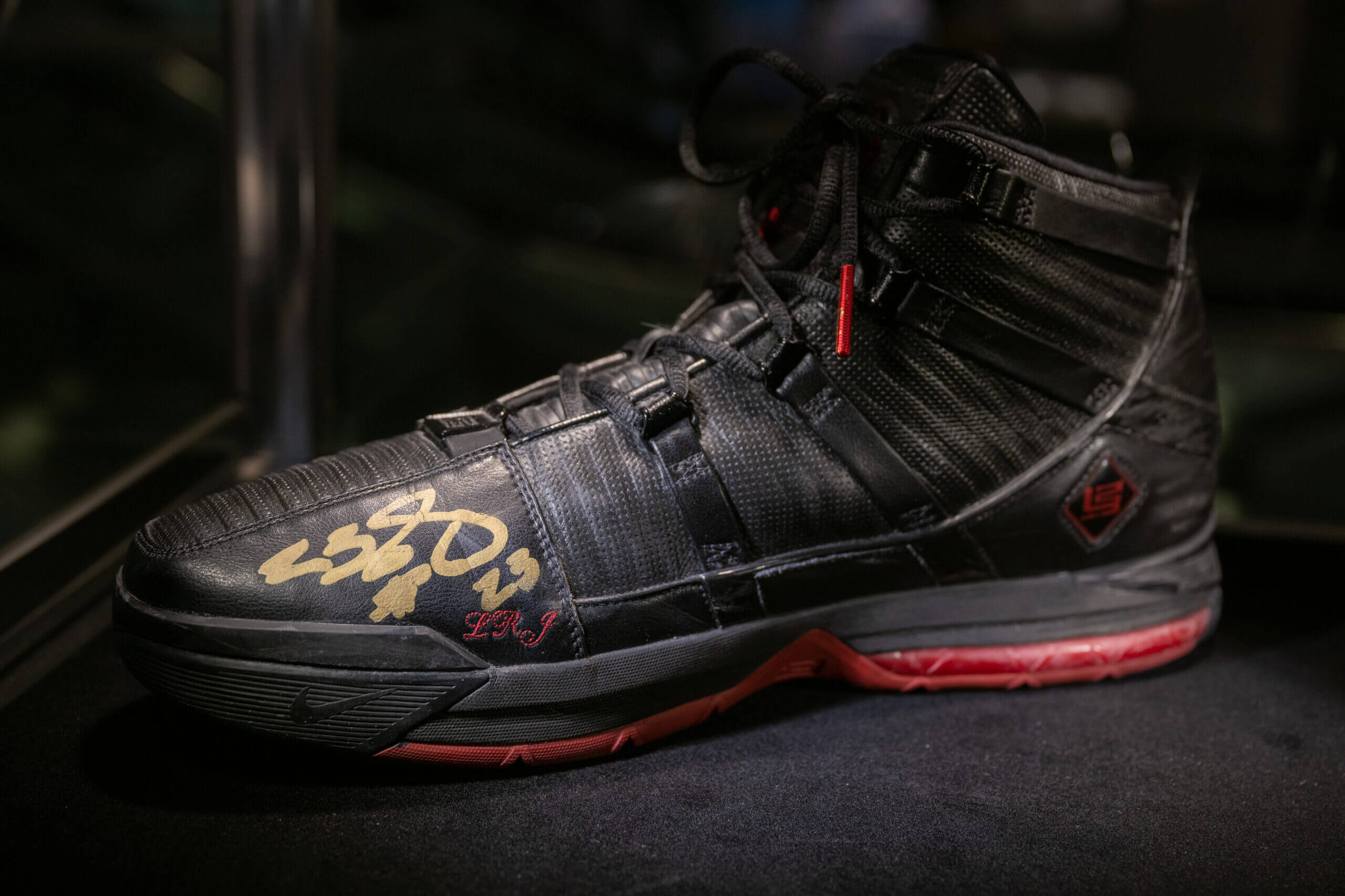 Big fan of the design. A smaller swoosh, and it has the look and feel of a durable street shoe.

This edition debuted in his first season with Miami and added a molded internal collar. Similar to the LeBron 7, but more rugged.

An upgrade on the LeBron 15 (more on that later) that works just as well as its predecessor. Features Battleknit 2.0 and Flywire cables to go with the air unit that made the 15s so good.

Still digging the futuristic look of this one. It incorporated cushioning on the outsoles to enhance on-court performance.

The OG of the bunch. You can’t ask for a much better debut sneaker.

It’s one of the lightest of the line, and it’s certainly comfortable. It incorporates Battleknit, which made for a snug fit and was designed to improve stability.

The low profile boosts this one near the top for me. Most LeBrons are high-top or three-quarter shoes, but in Year 20, he’s going with the low-top, similar to what Kobe Bryant did with later models of his signature shoe.

One of the most versatile shoes in the collection. Some have patent leather. Others have intricate designs. Just a great show that is comfortable and fashionable. The visible Air Max sole on the LeBrons made its debut with this shoe.

What’s your favorite pair? Leave a note in the comments section.