A mandatory payout of the 20-cent Rainbow 6 will be held at Gulfstream Park Saturday, when the pool is expected to swell into the millions.

The popular multi-race wager went unsolved for the 13th racing day in a row Friday, when multiple tickets with all six winners were each worth $772.70.

When Rainbow 6 betting begins Saturday, there will already be a pool of $1,066,988.63 carried over from Friday’s card.

The Rainbow 6 carryover jackpot is usually only paid out when there is a single unique ticket sold with all six winners. On days when there is no unique ticket, 70 percent of that day’s pool usually goes back to those bettors holding tickets with the most winners, while 30 percent is carried over to the jackpot pool. However, on mandatory-payout days, the entire pool is paid out to the bettor or bettors with the most winners in the six-race sequence.

Admission Office, who ran in the Pegasus Turf and finished second twice in Grade 2 stakes at Gulfstream Park last year, is set for a return from a six-month layoff since winning the Louisville (G3) at Churchill Downs. Tusk, the defending Tropical Turf champion; and Ride a Comet, the 2018 Del Mar Derby (G2) winner who came off a two-year layoff to win both 2020 starts on Woodbine’s synthetic surface; are other prominent contenders.

The Rainbow 6 sequence kicks off in Race 6, a five-furlong $20,000 claiming race on turf dash for older fillies and mares. Just Smok’n, who broke her maiden during last year’s Championship Meet, drops into a claiming race for the first time while coming off an eight-month layoff. Henni Penny is set to make her debut for trainer Kathleen O’Connell while dropping from $40,000 claiming company.

A full field of 12 3-year-olds has been assembled for Race 7, a mile maiden special weight event. Todd Pletcher-trained First Task, a son of Uncle Mo; Chad Brown-trained Rosenquist, also a son of Uncle Mo, are scheduled to make their respective debuts. Pletcher is also slated to saddle Bracken, who overcame trouble to finish second behind highly regarded stablemate Prime Factor last time out.

A five-furlong optional claiming allowance on turf with a full field of older horses follows in Race 8. Big Drink of Water, who came off a year-layoff to dominate a field of $35,000 claimers Dec. 17; Pletcher-trained Freewheeler, an allowance winner at Belmont two starts back; and Ian Wilkes-trained Chief Howcome, who finished third in an allowance over Churchill’s main track following a maiden score on turf at Indiana Downs; are among the contenders in what appears to be a ‘spread’ race.

A seven-furlong starter allowance in Race 9 will be contested by eight older horses, including Saffie Joseph Jr.-trained Town Classic, a close second in the Claiming Crown Rapid Transit.

The Rainbow 6 sequence will conclude in Race 10, a $25,000 maiden claimer for 3-year-old fillies at a mile on turf that appears to be a wide-open race.

‘This Horse Has Gears’: The Great One Makes Statement With 14-Length Maiden Triumph 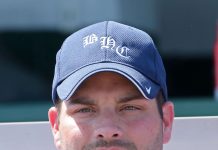