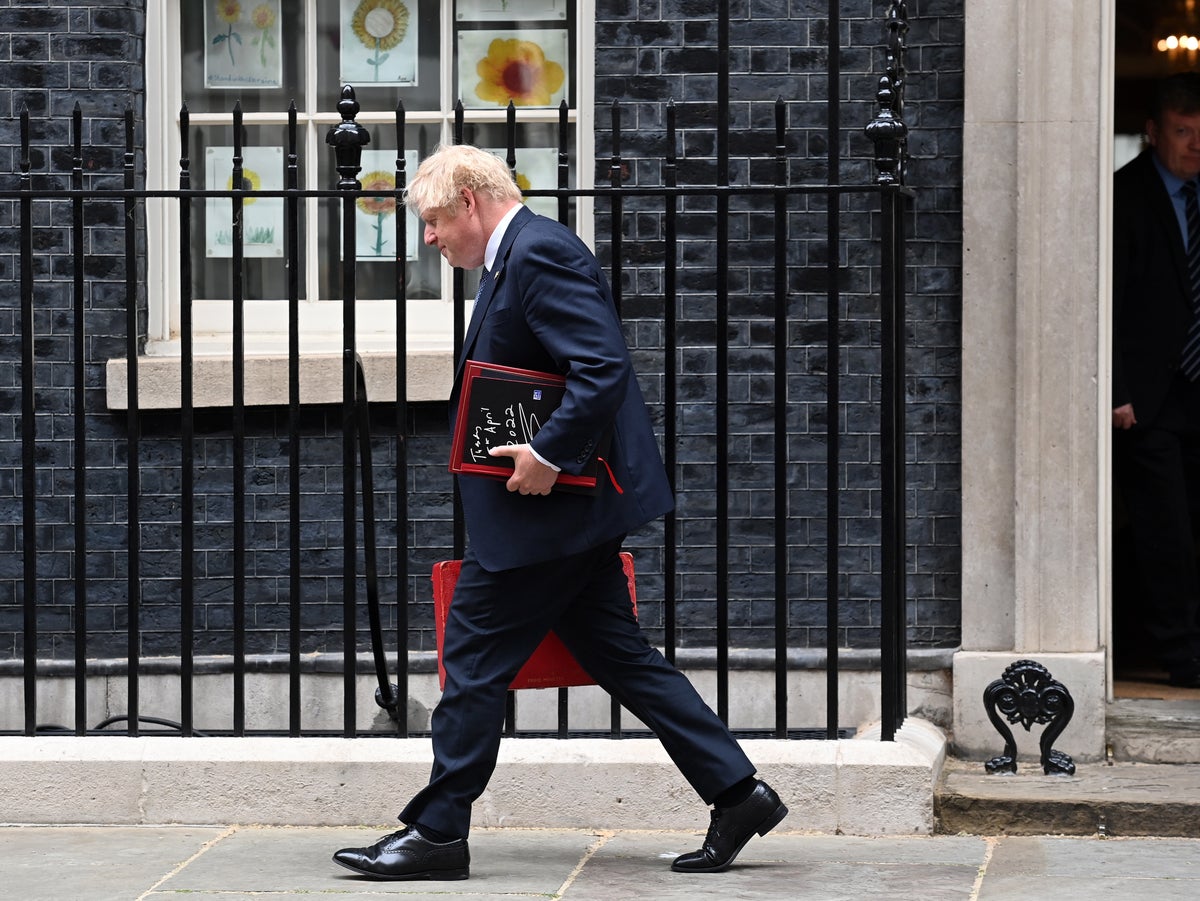 Boris Johnson is facing renewed calls to quit after more Tory MPs submitted letters of no confidence following the publication of Sue Gray’s report into the partygate scandal.

A total of 24 Conservative backbenchers are now publicly demanding his removal, but behind the scenes others have privately said he should step down.

It comes after images emerged of the prime minister apparently drinking at a lockdown-breaking Downing Street event during the height of the coronavirus pandemic.

Senior civil servant Ms Gray said an individual threw up and a scuffle broke out at a No 10 official’s leaving do, held during strict Covid restrictions, following “excessive alcohol consumption” by some at the event.

The prime minister issued a televised apology over the scandal in an address to the nation after the report attacked “a serious failure” to abide by the “standards expected of the entire British population.”

Here’s the full list of Tory MPs calling for the prime minister to stand down:

Sir Roger Gale, the first Tory MP to declare no confidence in the prime minister last year, described the pictures – which show the PM apparently toasting his then-communications chief Lee Cain with a plastic cup of sparkling wine in a room littered with alcohol bottles on 13 November 2020 – as “damning”.

The MP for North Thanet submitted a letter of no confidence in the prime minister in December, but subsequently said it was not the right time for a leadership election, given the conflict with Russia.

However the veteran Conservative MP has now told Times Radio: “It’s absolutely clear that there was a party, that he attended it, that he was raising a toast to glass one of his colleagues. And therefore, he misled us from the despatch box. And, honourably, there is one answer.”

Former Conservative minister Steve Baker last month called for Mr Johnson to quit for failing to obey his own Covid rules during the Partygate scandal.

Mr Baker, deputy leader of the Tories’ Covid Recovery Group, said he found he could not “forgive” the PM for “not obeying the letter and spirit” of the law.

He declined to comment on the photos, but tweeted a government poster issued during lockdown depicting a seriously ill Covid patient with the words: “Look her in the eyes and tell her you never bend the rules.”

Mr Wragg revealed he had submitted a no-confidence letter during a Commons debate on whether Mr Johnson should be referred to a parliamentary committee over Partygate.

He said it was “utterly depressing to be asked to defend the indefensible”. He added: “I cannot reconcile myself to the prime minister’s continued leadership.”

The backbencher submitted a no-confidence letter earlier this year – saying Mr Johnson’s “actions and mistruths” were overshadowing the government’s work.

Mr Mangnall told a constituent he stood by the resignation call following the PM’s police fine, according to Sky News.

The former chief whip called for the PM to go in Commons, as he also shared a letter of no-confidence he sent to 1922 Committee chair Sir Graham Brady.

The committee needs 54 letters to hold a vote of no confidence in the leader. Mr Harper said: “Our party still has so much to offer our country, but sadly, not under Boris Johnson’s leadership.”

The former party whip said Mr Johnson should “do the right thing and resign” during a Facebook event after the PM was fined.

But Mr Whittaker said he won’t be submitting a letter to the 1922 Committee – predicting that the PM would win a no-confidence vote (his removal would require a majority of Tory MPs, around 180, to vote against him).

Mr Mills said Mr Johnson’s position as prime minister was “untenable” after he was fined by the Metropolitan Police for breaking his own Covid laws.

He said he would be sending in a letter of no-confidence to 1922 committee chair.

The defence committee chair said it was “horrible” for Tory MPs to have to defend Partygate, and submitted a no-confidence letter earlier this year.

Following the police fine, Mr Ellwood said he still believed the PM should “step back”.

The ex-minister said Mr Johnson was “damaging the entire Conservative brand” over Partygate, describing him as a “liability” as she called on him to quit.

Ms Nokes has told a constituent she submitted a letter of no-confidence to the 1922 Committee “a long time ago”.

Announcing he had sent in his letter on no-confidence earlier this year, Mr Streeter said he could not “reconcile the pain and sacrifice” of the British public with “the attitude and activities of those working in Downing Street”.

He told a constituent he stood by the resignation call, according to Sky News.

Mr Aldous said earlier this year he had submitted a letter to the 1922 Committee “after a great deal of soul-searching” – saying a new leader would be in “the best interests of the country, the government and the Conservative Party”.

He reportedly told a constituent he “remained of this opinion”.

Mr Bell submitted a letter of no confidence in Mr Johnson’s leadership in February.

He said the prime minister’s position was “untenable” because of his handling of the Partygate scandal and the “breach of trust” represented by the series of lockdown-breaching events at 10 Downing Street.

The MP later said the Partygate row had come up on some doorsteps in early May and that the issues around Mr Johnson’s leadership “needs to be brought to a head sooner rather than later”.

Brexiteer David Davis dramatically called on the PM to quit in January, telling him: “In the name of God, go.”

The former cabinet minister became the most senior Conservative to demand his resignation over the partygate scandal, intervening during prime minister’s questions in the House of Commons.

“You have sat there too long for all the good you have done,” Mr Davis said, reviving a quote first attributed to Oliver Cromwell.

13. Neil Hudson, MP for Penrith and the Border

The backbencher spoke out against the PM after he was fined. Although Mr Hudson said the Ukraine war meant now was not the time for a leadership contest, he called on Mr Johnson to “outline a timetable and process for an orderly transition to a leadership election as soon as the international situation permits”.

In an intervention after Mr Johnson’s statement to the House of Commons following the publication of the update on the Gray inquiry on 31 January, the former chief whip told the No 10 incumbent he “no longer enjoys my support”.

The long-serving former schools minister became the 14th Conservative MP to publicly announce he had submitted a letter of no-confidence in the PM.

Mr Gibb attacked Mr Johnson for “flagrantly disregarding” rules he had set “within the fortress of 10 Downing Street”.

He said his constituents were “furious about the double standards” and the prime minister had been “inaccurate” in statements to the Commons.

The former children’s minister told constituents via a Facebook post on 15 January that he had “regretfully come to the conclusion that Boris Johnson’s position is now untenable” and that his “resignation is the only way to bring this whole unfortunate episode to an end”.

He wrote on Twitter: “I am now unable to give the prime minister the benefit of the doubt and feel it is now in the public interest for him to resign.”

Mr Baron accused the PM of misleading parliament, and said he “no longer enjoys my support”.

“Given the scale of rule-breaking in No 10, I can not accept that the Prime Minister was unaware,” he said in a statement on his website.

“Therefore, his repeated assurances in Parliament that there was no rule-breaking is simply not credible.

“Having always said I would consider all the available evidence before deciding, I’m afraid the Prime Minister no longer enjoys my support – I can no longer give him the benefit of the doubt.”

In a statement, Mr Simmonds said it was “clear that while the government and our policies enjoy the confidence of the public, the prime minister does not”.

He added: “Accordingly, it is time for him to step down so that new leadership can take forward the important work of the Government in ensuring that our people and country prosper.”

In a post on Facebook, Ms Richardson said: “I am clear that had this been a report about my leadership, I would resign.”

Ms Richardson said she feared that Mr Johnson’s apology in the Commons on Wednesday was “too little, too late”.

And she added: “Trust has been broken and it saddens me that the culture in No 10 and the length of time the enquiry has taken has eroded trust in your political representatives. It reflects badly on all of us.”

The former minister Sir Bob said the report by Sue Gray had uncovered “wholly unacceptable” behaviour in No 10, and said the Partygate scandal had undermined trust in the office of the prime minister.

“To rebuild that trust and move on, a change in leadership is required,” he said, confirming he had submitted a letter of no confidence.

In May, Ms Kearns reiterated she no longer had confidence in the prime minister’s leadership, saying his accounts to Parliament over the scandal were “misleading”.

She hit out at the “shameful lengths” she said some would pursue to preserve Mr Johnson’s premiership and attacked his call for the public to move on.

Former health minister Mr Brine said he had added his name to the list of Tory MPs to have handed in letters of no confidence – suggesting a vote appeared “inevitable”.

“I have said throughout this sorry saga I cannot and will not defend the indefensible. Rule-makers cannot be law-breakers,” he said.

Ms Marie Morris, who has the Tory whip restored after it was removed in January, confirmed to Sky News she had re-submitted a letter of no confidence in the prime minister.

Earlier this year, she said the events in Downing Street were “frankly insulting”.