A pair of Grade 1-winning 4-year-olds – Colonel Liam from the barn of Todd Pletcher and the Chad Brown-trained Domestic Spending – hit the wire together in Saturday’s Turf Classic Stakes at Churchill Downs in Louisville, Ky., producing the first dead-heat in the 35-year history of the Grade 1 grass fixture run immediately prior to the Kentucky Derby.

Colonel Liam, ridden by Irad Ortiz Jr., seized command from front-running Smooth Like Strait in the final sixteenth of a mile in the nine-furlong race, but Flavien Prat and Domestic Spending were in full flight after boring through a narrow opening in mid-stretch and switching to the outside. Domestic Spending was gaining ground with every strike and just caught Colonel Liam when the photo finish camera clicked at the wire. Time of the race on a firm turf course was 1:47.99.

Smooth Like Strait was a neck back in third, with Count Again 1 1/2 lengths further back in fourth in the field of nine older runners, edging Digital Age, Ivar and Cross Border in a photo finish, Masteroffoxhounds and Ride a Comet completed the order of finish.

Umberto Rispoli guided Smooth Like Strait to the lead and set soft fractions of :24.40 for the opening quarter mile and :49.17 for the half. Colonel Liam was sitting in third position, saving ground along the inner hedge, with Domestic Spending near the back of the field and off the rail in the run down the backstretch.

Rounding the stretch turn after six furlongs in 1:12.83, Ortiz switched Colonel Liam to the outside and drew up alongside the front-runner at the furlong pole, the mile clocked in 1:36.22. He edged past that stubborn rival and looked to be on his way to victory.

Domestic Spending, meanwhile, had just two horses beat turning into the stretch. Prat had to guide his mount through a narrow opening, drawing alongside Brown stablemate Digital Age, switched to the outside and Domestic Spending kicked into high gear as both Smooth Like Strait and Colonel Liam were drifting out in deep stretch. 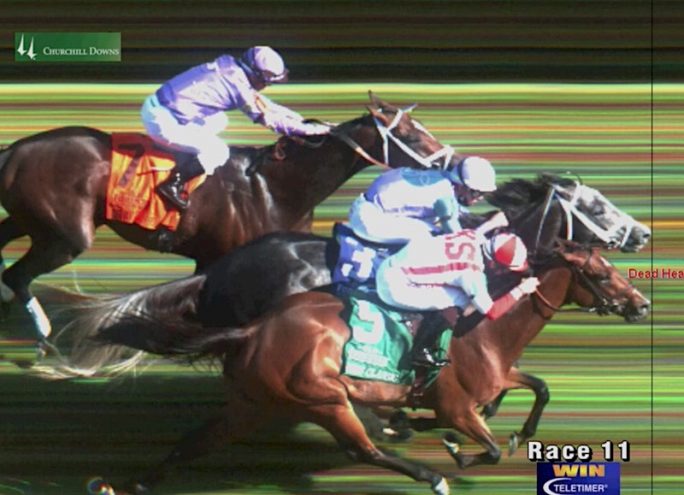 For Colonel Liam, the win was his fourth in a row, dating back to his first stakes victory in the Tropical Park Derby at Gulfstream Park Dec. 26. He then scored a rich victory in the Grade 1 Pegasus World Cup Turf Invitational Jan. 23 and came back to win the Grade 2  Muniz Memorial at Fair Grounds on March 20.

The 4-year-old colt by Liam’s Map, a $1.2 million 2-year-old purchase at the Ocala Breeders’ Sales Co.’s April sale, has now won six of eight career starts. He was bred in Kentucky by Phillips Racing Partnership.

First run in 1987 after Churchill Downs installed a turf course, the Turf Classic has been won by three horses that would go on later in the year to Eclipse Award honors: Bricks and Mortar in 2019 (also voted Horse of the Year), Wise Dan in 2013, and Paradise Creek in 1994. It has been a Grade 1 since 1996. 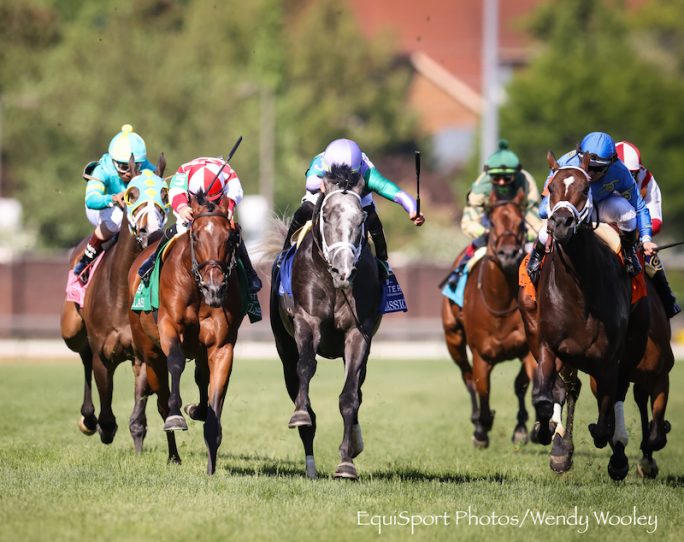 The Turf Classic field drives toward the finish at Churchill Downs, with Domestic Spending (red and white cap) and the gray Colonel Liam dead-heating for the win

Lukas Looking To Even Score With Baffert In Preakness 146

Letter To The Editor: Banding Together To Save Arlington Park 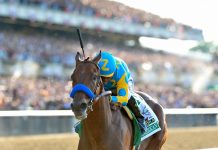 Howell: The High Maintenance Moniker Is Unfair — And Untrue — For OTTBs