Sunday’s Pick 6 will be boosted by a $122,783 carryover, as the multi-race wager went unsolved on Saturday at Belmont Park in Elmont, N.Y.

The $1 Pick 6, implemented at the current 48-day Belmont spring/summer meet, returned $867 to bettors who selected 5-of-6 winners correctly.

Saturday’s off-the-turf sequence kicked off in Race 5 when New York-bred Summer Brew [No. 11] drew in off the main track only list to best open company going six furlongs under Manny Franco for trainer Jorge Abreu. The daughter of Summer Front returned $8.10 for a $2 win wager.

Kathleen Babcock and David Brown’s Wow Brown [No. 3] returned a generous $59 when capturing his fifth career victory in Race 6. The 5-year-old Big Brown gelding made his first start of the year a winning one after having not raced since December when fifth at the same level at Aqueduct.

In Race 7, trainer Jonathan Thomas sent out Augustin Stable homebred Evoking [No. 3] for a successful career debut in a six-furlong off-the-turf maiden special weight. The daughter of Union Rags returned $11.40 for a 4 ½-length victory.

Three Diamonds Farm’s Doubly Blessed [No. 7] defeated a salty field in the fourth leg of the sequence, when earning his fifth career victory. Trained by Mike Maker, the son of Empire Maker returned $8 with his clear cut 1 ½ length victory over the sloppy track.

After finishing 11th in the Grade 1 Kentucky Derby, Sainthood [No. 5] earned his first graded stakes score in the Grade 2 Pennine Ridge for trainer Todd Pletcher. The son of Mshawish raced in tandem with Shawdyshawdyshawdy down the backstretch before engaging in a stretch duel with The Reds, besting his foe by one length. Sainthood returned $3.80 as the only winning favorite in the sequence.

In the finale, jockey Jose Ortiz piloted Kerik [No. 8] to her second career win in the Saturday finale. The daughter of Commissioner trained by Orlando Noda made her first start outside of Gulfstream Park a winning one while returning $32.80.

Featuring a $1 bet minimum and 15 percent takeout, the Pick 6 wager requires bettors to select the first-place finisher of six designated races on the card. A total of 75 percent of the full pool, minus takeout, will be distributed to bettors who select the first-place finisher of all six races. A consolation payout of 25 percent of the net pool will be distributed to tickets selecting 5-of-6 winners.

In the event there are no tickets with six winners, there will be a carryover of 75 percent of the net pool into the next day of the meet with the remaining 25 percent of the net pool distributed as a consolation payout to tickets selecting the first-place finisher in the greatest number of races on the card. On carryover days, the Pick 6 is offered with a 24 percent takeout.

NYRA Bets is the official wagering platform of Belmont Park, and the best way to bet every race of the spring/summer meet. Available to horseplayers nationwide, the NYRA Bets app is available for download today on iOS and Android at www.NYRABets.com. 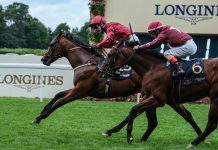 Between The Hedges: Importance Of New York’s Breeding Program

‘Figuring Out The Puzzle’ Keeps Training Exciting For Shane Wilson