ASHBURN, Va. — If you were hoping Doug Williams would disclose whom the Redskins intend to select with the 15th overall pick, well, you’re going to disappointed. The senior vice president of player personnel did, however, shed a little light on a handful of other draft-related issues during his press conference Monday afternoon at Redskins Park.

Here are The Athletic’s 10 takeaways from Williams’ 15-minute question and answer session with beat reporters:

• On the subject of drafting a quarterback, Williams said the acquisition of Case Keenum will not preclude the team from selecting a quarterback as high as No. 15. Williams even went as far as to say the Skins like a few of the signal callers that could be available in the middle of the first round and “nine out of 10 times” they’re to go with the quarterback if he’s the highest ranked player on their board.

“We needed a quarterback and we were able to trade… 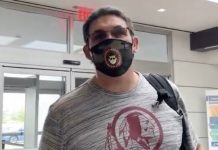