Win Win Win, the impressive winner of the Grade 1 Forego Stakes at Saratoga in his last start, will stand the 2021 breeding season at Ocala Stud.

The Live Oak Stud homebred will stand as the property of a partnership between Live Oak Stud, Airdrie Stud, and Ocala Stud, and his fee has been set at $5,000 S&N.

“We are very excited to add Win Win Win to our roster,” said Ocala Stud’s David O’Farrell. “He’s a big, grand-looking horse with a lot of presence. His record-setting speed, versatility, and classic bloodline which consists of three Kentucky Derby winners give Win Win Win a great opportunity to become a top sire.”

Trained by Michael Trombetta, Win Win Win lived up to his name on the racetrack. He captured five of his 12 starts and placed in four others en route to earnings of $601,600. Win Win Win concluded his accomplished racing career on a high note, finishing with a flourish to take down top prize in the G1 Forego. In showcasing his impressive turn of foot, he won the seven-furlong event in 1:21.71, defeating four Grade 1 winners, including Breeders’ Cup Dirt Mile favorite Complexity.

Last season at three, Win Win Win set a new track record at Tampa Bay Downs in winning the Pasco Stakes, an early prep for the G2 Tampa Bay Derby in his sophomore bow. He drew off powerfully in the seven-furlong test, speeding to a 7 1/4-length score in the stakes and track-record time of 1:20.89, earning a 2 on the Ragozin Sheets.

Demonstrating his versatility, Win Win Win also took down the Manila Stakes at one mile on turf at Belmont Park, polishing off the distance in 1:31.56, just one-fifth of a second off the course record set by Oscar Performance. Prior to that impressive score, Win Win Win finished second to multiple Grade 1 winner Vekoma in the G2 Blue Grass Stakes.

A precocious juvenile, Win Win Win won two of his three starts as a 2-year-old, taking a 6 1/2-furlong maiden special weight at Laurel Park in his career debut before crushing allowance foes by 6 1/2 lengths in a lively 1:02.30 for 5 1/2 furlongs in his next start. He also finished second in the seven-furlong Heft Stakes at Laurel to close out his juvenile campaign.

“The combination of Win Win Win’s tremendous talent and the opportunity he will receive at Ocala Stud is why we’re so excited to partner on his stallion career,” said Airdrie Stud’s Bret Jones. “No one will give this horse a better chance to succeed than Ocala Stud and we look forward to doing our part by supporting him heavily in each of his early years at stud. I know the Live Oak team has always believed he was a genuine star, and we are grateful to Mrs. [Charlotte] Weber for letting Airdrie play a role in his exciting future.” 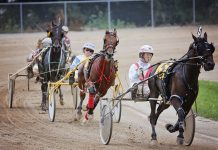