Why We’re Experiencing So Many Unusually Hot Summer Nights


Source: NOAA’s Global Historical Climatology Network·Temperature distributions show daily minimum temperatures for the summer months (June-August) in each decade, measured by the airport weather station. Data for the 2020s consists of the 2020 and 2021 summers. Nights are considered abnormally cold or hot based on the 5th and 95th percentile of the 1960s temperature distribution.

This summer was unusually hot, especially at night. Minimum temperatures were the hottest since 1895 for every state on the West Coast and parts of the Northeast. Most other states neared their record highs for overnight temperatures this meteorological summer (June through August).

This is part of a trend that aligns with the predictions of climate models: Across the U.S., nights are warming faster than days. This effect is amplified in cities, which are typically warmer than their surroundings.

“​At nighttime, the deserts cool off really, really fast, but our city does not,” said Jennifer Vanos, a professor in the School of Sustainability at Arizona State University, referring to Phoenix.

“Not having that break from the heat is really hard on the human body — it builds up,” she said. “And knowing the temperatures in Phoenix, we’re going to be in the 90s overnight and we’re going to be up to 110 sometimes in the day. None of those are safe for a person that doesn’t have access to air-conditioning.”

To see how summer nights have gotten hotter in recent decades, we charted 60 years of daily weather data from nearly 250 U.S. airports that have kept consistent weather records.

These charts show a clear trend: Nighttime temperatures that would have been unusually hot in the 1960s are increasingly common.

The warming trend seen in these charts reflects two factors that add together: Global warming is raising the planet’s background temperature, and many cities are becoming more urbanized.

Look up your city’s airport

While average nighttime temperatures are on the rise, it’s the extremes — that is, the number of abnormally hot nights — that are rising the fastest.

A small shift in the average can cause a large change in the frequency of extreme events, with big consequences for climate change.

When the average temperature increases, the distribution of daily temperatures shifts towards its tail end. “We are making that tail fatter,” said Claudia Tebaldi, a climate scientist at the Pacific Northwest National Laboratory. “And so the possibility of experiencing a day that belongs to the tail is higher than it used to be.”

There’s a saying among climate scientists: “The sting is in the tail.” Extreme weather, although rare, does the most damage. And as climate change pushes weather distributions towards their tail end, extreme weather becomes more common.

This past summer was a clear demonstration of this sting. June’s record-breaking heat wave in the Pacific Northwest would have been “virtually impossible without climate change,” according to an analysis by an international team of climate researchers. The study found that such an extreme heat wave is at least 150 times more likely because of human-caused global warming (which has raised global average temperatures by about 2 degrees Fahrenheit).

And if the world warms by another 1.4 degrees Fahrenheit — which could happen this century without a drastic drop in greenhouse gas emissions — the study concluded that such extreme heat waves “would occur roughly every 5 to 10 years.”

In 2021, many states experienced their hottest summer nights since 1895 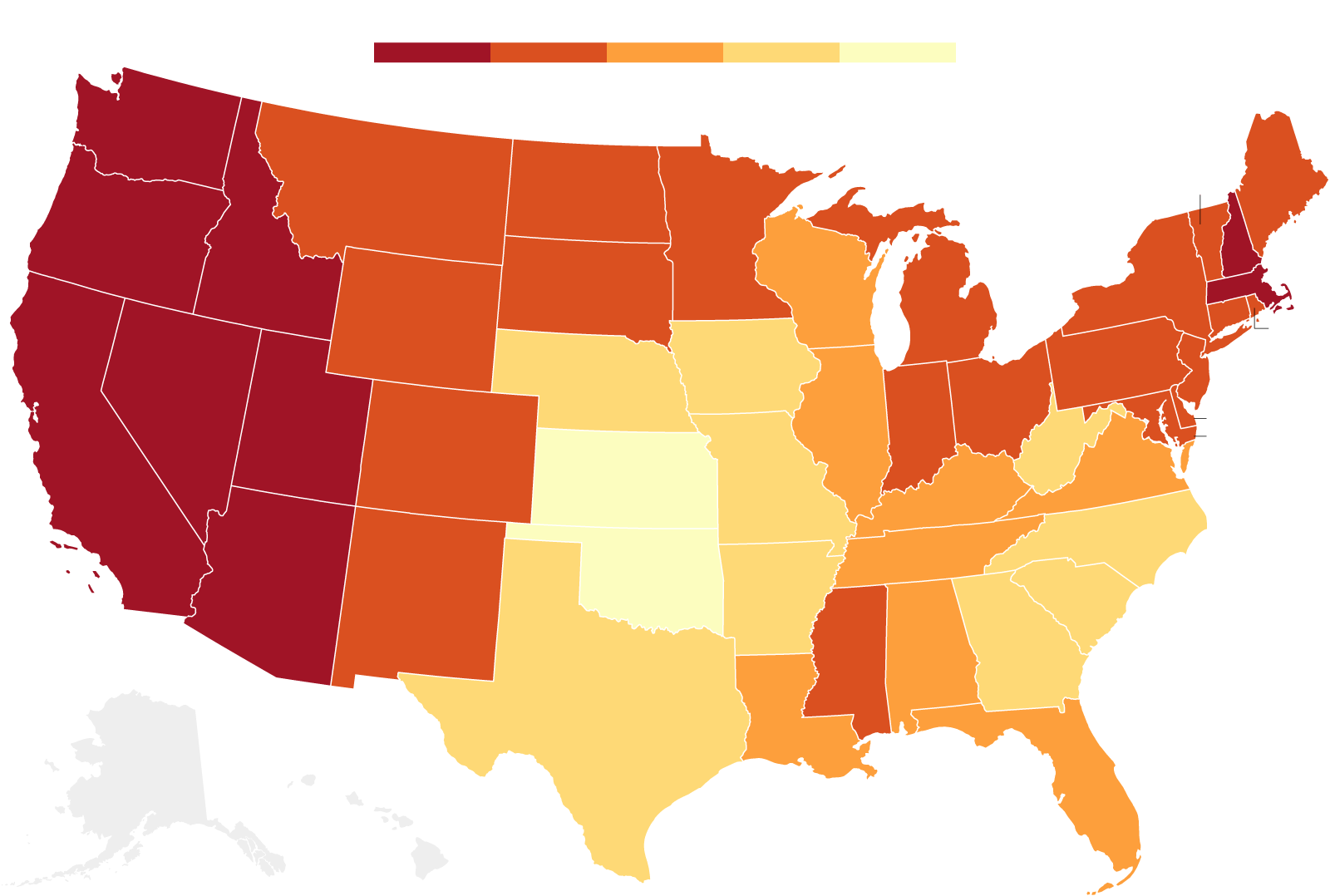 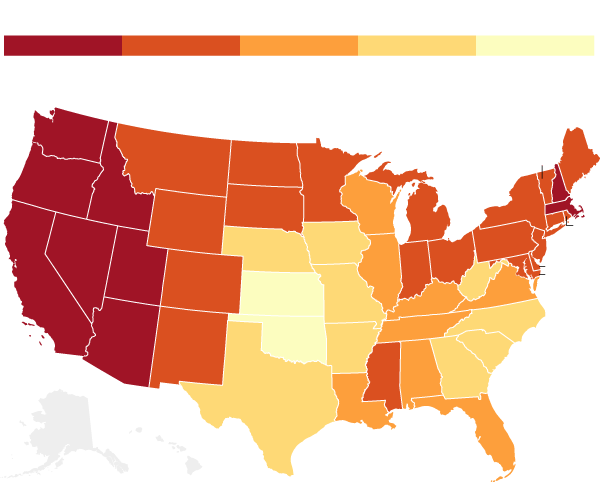 Source: NOAA’s National Centers for Environmental Information·Map shows the ranking of 2021’s summer (June-August) minimum temperatures for each U.S. state, compared with the period from 1895 to 2021. States shown in dark red experienced their hottest summer nights on record in 2021.

Nights are hotter in cities

Over several decades, most large U.S. cities have warmed “at more than twice the rate of the planet as a whole,” according to research co-authored by Brian Stone, a professor of environmental planning at Georgia Tech.

This is primarily because cities contain a lot of concrete, asphalt and brick. These materials act like sponges for heat. They soak up sunlight during the day, hold on to this heat and release it overnight. Cities also have fewer trees than their surrounding areas, which reduces shade and moisture, causing urban temperatures to rise further.

“I think people notice this when they’re walking around cities,” Professor Vanos said. “You can feel that heat at nighttime radiating off that surface. That’s the heat that was being absorbed all day.”

To a lesser extent, cities are also warming because of human activity. A study in Portland, Ore., found the air above roadways and commercial districts was up to 4 degrees Fahrenheit cooler on weekends, when there were fewer cars on the roads and less activity in commercial buildings.

Cars can contribute to city heat as well. “Internal combustion engines are uniquely inefficient,” said Professor Stone, as they typically use about 20 percent of the energy released in burning gasoline, while the remaining 80 percent ends up as waste heat.

Air-conditioners can also warm cities, by using electricity and by extracting heat from indoor spaces and pumping it outdoors. A study in Phoenix showed that air-conditioners can increase outdoor air temperatures by 2 degrees Fahrenheit.

As cities get hotter, the burden of extreme heat is unequally distributed. Within cities, the hottest neighborhoods tend to be those where people of color and poorer people live. These areas have fewer trees and more paved surfaces.

Poorer communities are also less likely to use air-conditioners during heat waves, which increases the risk of heat-related death. “Either they don’t have it in their home or they are not using it because of the monthly electric bills that are too high,” said Jaime Madrigano, an environmental epidemiologist and policy researcher at RAND Corporation (which is a nonprofit research institute).

Her research on New York City has shown that Black New Yorkers are more likely than other groups to die during heat waves, and that deaths during heat waves were higher in neighborhoods with fewer green spaces. These environmental inequalities are linked to systemic racist practices (such as redlining neighborhoods), which have created large racial disparities in income, housing and health.

Earlier this year, a study that used satellite imagery to infer urban heat showed that people of color lived in hotter parts of a city in all but six of the largest 175 U.S. cities. In particular, Black residents lived in neighborhoods where summer daytime ground temperatures were 3 degrees Fahrenheit hotter on average compared with neighborhoods where white residents lived.

The research found a similar pattern with income: People living below the poverty line resided in hotter parts of a city compared with wealthier residents.

“This is not an isolated problem, this is not a single one-off anecdote,” said Angel Hsu, an author of the research and a professor of public policy and environment at the University of North Carolina. “This is actually a widespread, pervasive problem.”

As the climate warms, extreme heat will become more intense and more frequent. The recent report by the Intergovernmental Panel on Climate Change warns that for every added increment of global warming, the changes in extremes will continue to get larger, leading to more unprecedented heat waves, droughts and heavy rains.

“You’re not going to see the impact in a linear basis,” said Professor Hsu, referring to how climate change will affect cities. “It happens exponentially.” 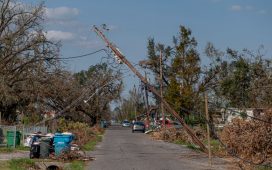 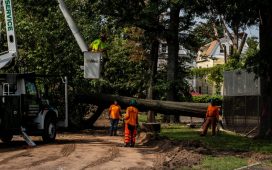 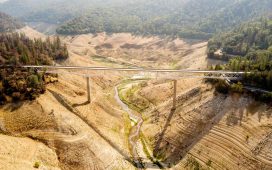 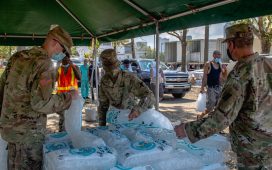 The Greatest Killer in New Orleans Wasn’t the Hurricane. It Was the Heat. 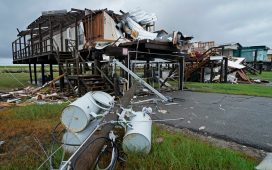 Nicholas Path: Where the Storm Goes Next 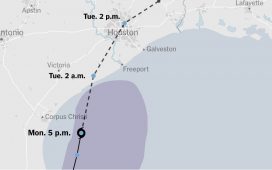 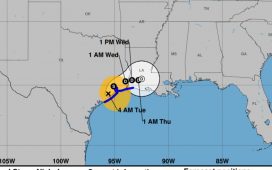 Hurricane Nicholas Path: Where the Storm Goes Next 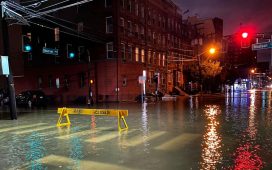 How to Prepare for (and Survive) a Flash Flood 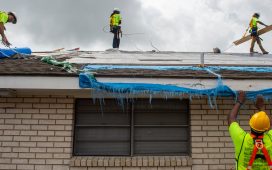