White House sees light at the end of the monkeypox tunnel


For Daskalakis, it was a visceral reminder of the depth of the challenge awaiting him. A gay man and longtime public health official, he’d spent decades working alongside these activists fighting against diseases like HIV/AIDS and now, mpox, that primarily impact the LGBTQ community.

But he’d also just agreed to take on a top administration job that would make him responsible for managing the mpox crisis — and a fresh target for the frustration and anger on display in front of him. On Aug. 2, the day after his appearance in Montreal, the administration officially announced Daskalakis as the deputy coordinator for its response to mpox, the virus known then as monkeypox.

“It was like, I know that I’m going to the White House!” Daskalakis said in a recent interview, recalling his thought process as he watched the scene unfold.

If the episode illustrated the perils of his new position, it also provided clues about how to approach it. Since taking charge of the federal mpox operation, Daskalakis and his boss, Robert Fenton, have coordinated closely with a sprawling set of activist and public health groups. Once the administration’s harshest critics, these groups have since become partners in a response aimed at surging resources into LGBTQ communities and vaccinating those at highest risk.

Since then, national case counts have plunged from an average of more than 450 a day to just five. The persistent vaccine shortages that drove fears of another entrenched epidemic have largely abated. And the groundswell of anger that once threatened to turn the administration’s shaky response into a political debacle for President Joe Biden has been reduced to a simmer.

“This really was a Biden administration fuck-up,” said Peter Staley, a prominent HIV/AIDS activist and board chair of PrEP4All, one of the most outspoken critics of the early response. But, he added, “Demetre and Robert did an amazing job working with community groups to calm everyone down after the administration’s earlier mistakes and say, ‘Give us a chance on this path forward.’ And it paid off.”

Speaking on a recent weekday afternoon from the small office they’ve shared since arriving in Washington, Fenton and Daskalakis acknowledged they had few guarantees early on that their efforts to restore trust in the government’s response and quickly rein in the outbreak would gain traction.

Fenton, a veteran of the Federal Emergency Management Agency, was tapped to steer the response because of his logistical expertise. But he had no background in public health and little in-depth experience managing such an outbreak. His only request upon taking the job, he said, was to be paired with someone who had a deep understanding of the health and LGBTQ communities. That role fell to Daskalakis, a well-known figure in those circles who had spent the past year running the Centers for Disease Control and Prevention’s HIV/AIDS prevention division.

The two men had never met, yet suddenly found themselves running a crisis response hampered by a series of core challenges — from widening test access to boosting vaccine supply and improving awareness within the most vulnerable communities.

More than four months later, their efforts have been effective enough that Daskalakis and Fenton are now sketching out a wind-down of the White House-led response, with the goal of returning much of the management to the CDC.

The transition would likely begin around the time the mpox public health emergency expires at the end of January, according to people familiar with the planning. Fenton and Daskalakis declined to comment on the specifics of their plans, but agreed that the emergency stage of the outbreak was nearly over.

“The strategy has been set,” Fenton said. “We’re headed definitely in the right direction to make that transition.”

That wasn’t the case back in August.

Working off a priority list developed in their first days on the job, Fenton and Daskalakis sought to improve coordination across the several health agencies involved in managing the outbreak — a complex bureaucratic task further complicated by the fact that some health officials felt miffed the White House had yanked control of the response out of their hands, several people close to the matter said.

They also set about personally repairing relations with the LGBTQ and public health communities that had felt increasingly left out of the government’s decision making as the crisis worsened in the summer.

“In an event like this, there’s not a lot of trust,” Fenton said. “You have to build the communication channels, you have to listen, you have to integrate those ideas into our strategies.”

After advocates raised concerns that people weren’t getting vaccinated because they were hesitant to attest in writing to being a gay or transgender male with multiple partners, the CDC relaxed its requirements, allowing anyone who said they needed a shot to receive one. An extended pressure campaign to convince the World Health Organization to rename the disease also came at the urging of LGBTQ groups that argued the disease’s original name was stigmatizing.

The White House also caught a pair of critical breaks: The group of men who have sex with men at highest risk proved willing to change behaviors to avoid infection, according to a CDC study, slowing the virus’ spread while the government scrambled to catch up. A controversial decision to split vaccine doses into fifths and use an intradermal injection method — depositing the vaccine into the skin rather than under it — appears to have paid off as well based on early studies, multiplying the supply without sacrificing the vaccines’ protectiveness.

The progress has emboldened the Biden mpox team. Once hesitant to promise the administration could do much more beyond bringing the outbreak under control, Daskalakis is now confident mpox’s circulation within the U.S. can be stopped altogether.

Still, even as mpox cases hit new lows, the response team continues to grapple with lingering challenges. Biden’s personal directive to Fenton and Daskalakis that they make equity a top focus has yielded only middling results.

Black and Latino people account for a majority of mpox cases, CDC data show, including roughly two-thirds of those recorded in the fall months as infections dropped overall. But they have received just a fraction of the vaccine doses to date.

“The social and racial disparities that have been persistent in this outbreak are really disturbing,” said David Harvey, executive director of the National Coalition of STD Directors. “They mirror the larger disparities in American society.”

Health experts fear the gaps could grow as the focus on mpox at government and community levels wanes, and amid a broader struggle to convince those at risk to get their second dose of the vaccine. While more than 42 percent of the 1.7 million at-risk people have gotten their first shot, fewer than a quarter returned for their second — a lag that Daskalakis and Fenton say is now one of their top concerns.

The mpox team has recently shifted its messaging to promoting that second shot, pitching it as a preventative move against future flare-ups. Officials are confident they can eliminate the current outbreak, but they acknowledge mpox’s continued spread in other countries means the virus will inevitably be brought back into the U.S. in the future.

“It’s not just getting to zero,” Fenton said of the vaccine drive. “It’s how to sustain that rate over time, especially as weather changes and behaviors change.”

That longer-term work will soon be driven less and less out of the White House. As management of the mpox response returns to the CDC, Fenton plans to return to his job at FEMA, according to the administration’s wind-down proposal, which has yet to be finalized.

Daskalakis would move back to the CDC under that same proposal to continue managing the response from there. But he’d also retain authority at the Health and Human Services Department to coordinate efforts across the government’s various health agencies. Fenton declined to discuss his departure plans, saying no official decisions had been made. Daskalakis also declined to talk about his next role, but said he had a “sneaking suspicion I’m going to be closely aligned” with the ongoing mpox response.

Even then, the White House is expected to remain involved at some level in an oversight capacity, a sign that aides remain wary of fully entrusting the operation to a CDC many of them blame for allowing the initial outbreak to spin out of control.

Restoring the administration’s credibility with LGBTQ and health groups on the front lines also remains a work in progress, advocates said. They still fault the government’s slow reaction and confusing guidance in the outbreak’s first weeks for exacerbating the crisis. And while Fenton and Daskalakis get high marks for their campaign to win back trust, activists are keeping a close eye on how the administration follows through in guarding against future flare-ups.

“Hopefully the administration will jump back into action when those spikes happen,” Staley said. “It will be incumbent on us to do our jobs [as activists] and monitor how they’re doing.”

Eugene Daniels contributed to this report. 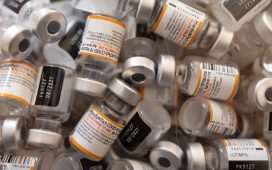