Since the start of California’s equine necropsy program in 1990, researchers at the University of California-Davis and elsewhere have learned a lot about fatal injuries in racehorses. Data from the necropsy program has given regulators, veterinarians, and trainers pointers on the best way to manage risk factors from surface to training schedule to shoeing.

Dr. Sue Stover, professor of surgical and radiological sciences for UC-Davis, provided an overview of the program’s findings this week on a video conference series from the Welfare and Safety of the Racehorse Summit.

“The post-mortem program of course, deals with catastrophic injuries and we’ve learned a lot from that, but a catastrophic injury is just a severe, acute manifestation of the milder injuries that our horses are dealing with all the time,” said Stover.

Stover described fatal musculoskeletal injuries as falling into two basic categories: overload injuries and repetitive loading injuries. The most common overload injuries are scapular, humeral, and tibial fractures. A 2012 peer-reviewed study showed that 56 percent of fatal complete scapular fractures in Thoroughbreds occurred in training, and one-third of Thoroughbreds suffering from them were unraced. Ninety percent of fatal humeral fractures studied in the program came in training versus racing, often at a slow gallop and most commonly after a lay-up of 60 days or more. Somewhere between 49 and 63 percent of fatal humeral fractures took place in unraced horses.

Stover said while we’re still learning about the causes of overload injuries, it’s likely that they happen because bone remodeling has not completed after a lay-off or at the beginning of a horse’s career.

“We don’t fully understand but one of the reasons that probably contributes to it, is that if horses have to go into a layup where they’re not able to do a significant amount of training, because that bone mineral level is happy, the body says it doesn’t need that much anymore and you lose it,” said Stover. “Just like astronauts going up in space, if they don’t exercise when they come back down, they’ve lost a lot of bone. Bone doesn’t really do that on the periphery where we can see it, but it can do it inside.”

Stover described the bone modeling and remodeling process similarly to the way Dr. Larry Bramlage put it in a Paulick Report feature from last month — horses are not born with skeletons meant to withstand racing, but develop those skeletons over time by a process of overstress and repair. In the process of repair, bones grow thicker and denser. Those changes are easily visible on necropsy when the bone is examined in crossections.

When the skeleton is exposed to an increase in stress from increased work intensity, the bone suffers damage. The bone quickly removes damaged cells, leaving behind large pores, but it takes longer to build in newer, stronger bone. It’s difficult to be precise about how long an individual horse may take to repair damage from a particular workload — that’s what makes it so hard to predict and prevent injury. So far, data indicates it may take two to three weeks for osteoclast cells to remove damaged bone after a big effort, but up to three months for osteoblasts to finish putting in stronger, new bone.

Until both cell types have completed the process, the bone is vulnerable. This type of unrepaired damage from training is often obvious around the site of a fatal fracture on necropsy, according to Stover.

In overload injuries, a horse’s skeleton is unable to repair itself quickly enough in response to increasing forces placed on it, but a horse with an overtraining injury is often one who has been in high intensity work for an extended period. These types of injuries are more common in older horses or horses well into their careers and include proximal sesamoid bone fractures.

“An increased level of intensity going from cantering and galloping to a breeze, the bone doesn’t need to see much of it, it just needs to see that new level for a short amount of time,” she said. “The bone responds to the level of work, not the amount of work.”

The trouble is, it remains unclear what qualifies as a “high intensity work” and how many of those is too many in a given range. There is probably a range of high-speed furlongs over time that are doable for a horse, over which a trainer risks an overtraining injury, but that range remains elusive. Stover said that range would vary between horses of different ages, on different surfaces, between different styles of shoeing and trimming.

Stover’s research has established that fatal injuries often take place at areas of preexisting damage, but it remains difficult to properly identify those areas of damage before an injury occurs. Horses harboring skeletal damage from overtraining or overloading aren’t necessarily classically lame.

“Horses can look like they’re doing fairly well but have a substantial problem underlying,” she said.

In one study, Stover and her team did a basic assessment on 200 horses at the track, looking for heat in the lower limbs. Ninety percent of those who showed no heat or swelling at any time were still in training three months into the study, while 45 percent of those who had exhibited some heat in the leg were out of training after three months. The finding may seem obvious — a horse with swelling in his legs may have an injury — but since those bumps and heats are sometimes transient and not always accompanied by consistent lameness, some horsemen may be inclined to dismiss them at first. Unfortunately, that may only make the underlying cause more serious.

For Stover, the horse’s best tool to fight catastrophic or other injuries is the team around him, from the trainer to the veterinarian to the groom.

“It really takes a trainer who’s paying attention to the horse’s attitude, how it’s doing, how it reacts to a certain event,” she said. “Let’s say we increase the intensity of training and the next couple of days the horse is a bit doggy or just a bit off or doesn’t want to walk out well. Those are really subtle signs that I think an astute trainer who’s paying attention to those can say, ‘This horse needs a little more time to recover.’ When we look at large numbers, we can see trends, we know what’s dangerous, but when you’re looking at the individual horse, I don’t think there’s anything that beats good horsemanship.”

‘Such A Warrior’: Vekoma Jumps Into Top Three Of NTRA Top Thoroughbred Poll 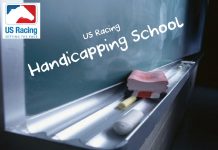 Reach Out! How to REACH the Next Level of Profit at the Track

‘Unlucky The Last Two Races,’ Major Fed Tries To Get Back In Gear In Indiana Derby