What Donald Trump has said about the Jan 6 riot 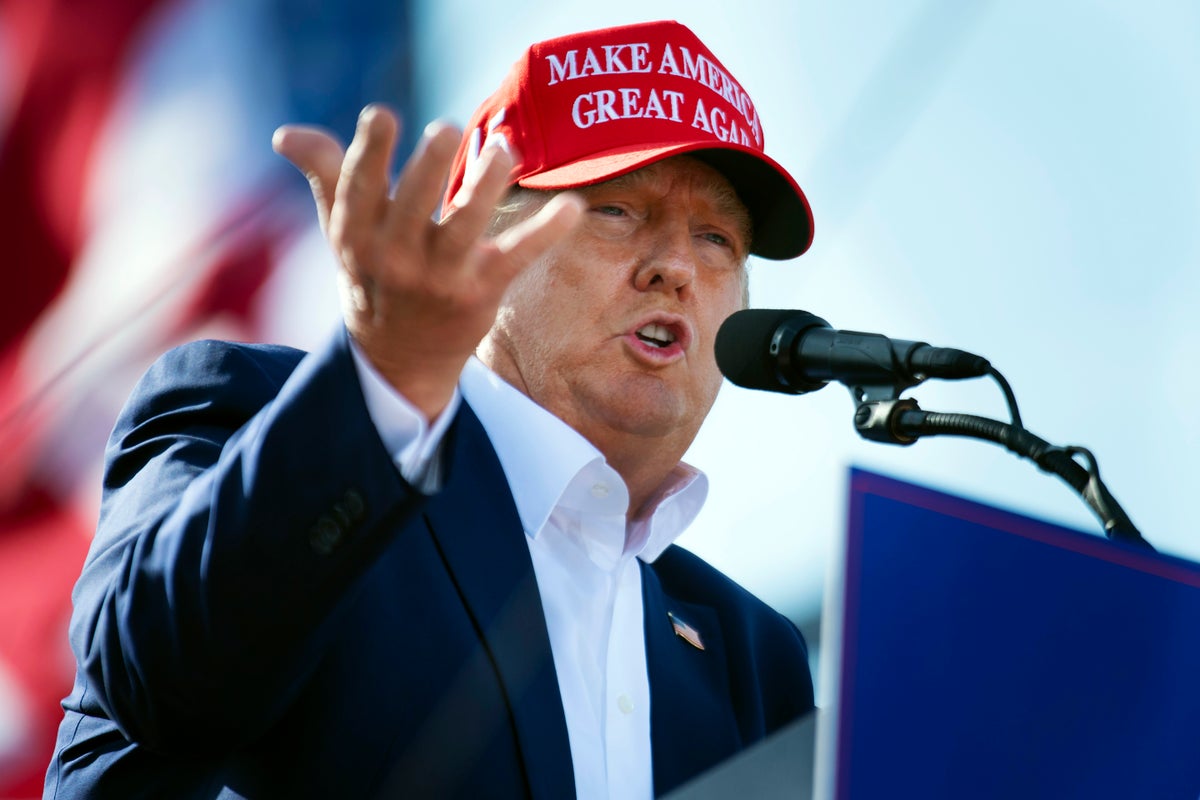 The House select committee investigating the January 6 attack is currently holding six televised hearings over the attempted insurrection at the US Capitol in 2021, mounted by supporters of 45th president Donald Trump determined to overturn the results of the 2020 election.

The panel, chaired by Democratic congressman Bennie Thompson, has already interviewed over 1,000 witnesses behind closed doors, including integral members of Mr Trump’s inner circle, about precisely what happened on 6 January 2021, a date to live in infamy on which five people were killed as a violent mob, motivated by their candidate’s false election fraud narrative, smashed through security barriers and stormed the legislative complex.

The committee has yet to lay out a full schedule or say precisely who most of its witnesses will be for the blockbuster hearings, although two men central to the discussion will of course be Mr Trump and his estranged former vice president Mike Pence.

Having lost the electoral vote on 3 November 2020 to Democrat Joe Biden by 306 to 232 and the popular vote by 81.3m ballots to 74.2m, Mr Trump immediately and baselessly began to insist the contest had been “rigged” in a vast nationwide conspiracy orchestrated by his opponents, a fallacy he has kept up ever since.

Two months of farcical legal proceedings led by the outgoing president’s personal attorney, former New York City mayor Rudy Giuliani – notorious for his running hair dye and bizarre press conference in the parking lot of a Philadelphia garden centre – had concluded with Mr Trump’s allies entirely failing to prove his bogus allegations, although his base remained unshakeable in its conviction that the vote had indeed been “stolen”.

Increasingly desperate, the president was caught on tape exerting pressure on Georgia secretary of state Brad Raffensperger to “find” additional ballot papers in the crucial swing state before turning his attention to his own deputy, Mr Pence, whom he implored to use his position overseeing a joint-session of Congress on 6 January to render the election results null and void, keeping the heat on his ally with a series of tweets and in person on the campaign trail.

“I hope Mike Pence comes through for us,” Mr Trump said, stumping for Republican Senate runoff candidates David Perdue and Kelly Loeffler in Dalton, Georgia. “I hope our great vice president comes through for us. He’s a great guy. Of course, if he doesn’t come through, I won’t like him very much.”

Mr Pence refused to oblige, writing a letter to Congress in which he explained: “I do not believe that the founders of our country intended to invest the vice president with unilateral authority to decide which electoral votes should be counted during the joint session of Congress, and no vice president in American history has ever asserted such authority.”

On the day itself, as the elected representatives convened to ratify the results, Mr Trump, Mr Giuliani and other MAGA luminaries addressed a rally organised by the “Stop the Steal” movement in Washington DC, in which the president told his followers to “fight like hell” and beseeched them to march on the Capitol, pledging to join them before slinking off back to the White House instead to watch the carnage unfold on TV.

The rest is history and for the committee to determine, suffice to say that Mr Trump’s mob, whose number included armed members of far-right groups like the Proud Boys, the Oath Keepers and QAnon, came uncomfortably close to confronting Mr Pence and other lawmakers opposed to their misguided cause like Nancy Pelosi, Chuck Schumer and Mitt Romney after forcing their way through the barricades.

So incensed were the would-be insurrections by Mr Pence’s refusal to support Mr Trump that they called for his hanging on the National Mall and even erected a gallows before order could be restored later that evening, as a shocked world looked on.

It was a minor miracle that the whole fiasco did not result in more bloodshed than it did and that no congresspeople or senators were harmed.

“To those who wreaked havoc in our Capitol today: you did not win,” Mr Pence said in the aftermath. “Violence never wins. Freedom wins. And this is still the people’s house. And as we reconvene in this chamber the world will again witness the resilience and strength of our democracy.”

His justifiably indignant tone stood in sharp contrast to that of the president, who issued a number of tweets that day calling on his supporters to “Stay peaceful!” and respect law enforcement before appearing in a hastily shot, somewhat reluctant video from the White House Rose Garden in which, without admitting he had been wrong, he urged his “great patriots” to go home, telling them: “We love you. You’re very special.”

The former running-mates would not speak for several days after 6 January but did eventually hold clear-the-air talks on 11 January that would expose how far apart the two men stood in their attitudes to what had unfolded.

Mr Trump had never once inquired about the wellbeing of Mr Pence and his family after the ordeal they had been exposed to and their relationship would never recover.

In the remaining two weeks before he left office, Mr Trump repeatedly deplored the “political violence” at the Capitol, perhaps with one eye on preventing such unsavoury scenes from being remembered as the defining event of his presidency.

Since leaving DC on the day of President Biden’s inauguration, an event at which Mr Pence stood in for him for the final time, Mr Trump has cut a solitary figure, skulking around his Florida mansion, Mar-a-Lago, surrounded by grovelling courtiers in Hawaiian shirts and straw hats or playing 18 holes in the sun and boasting about his handicap like the state’s many other affluent retirees.

Deprived of his once-essential Twitter presence, Mr Trump has been forced to fire off old-fashioned press releases and back faltering alternative media platforms of his own, like his glorified personal blog or the ill-fated Truth Social, but that has not stopped him weighing in on the Capitol riot and his former sidekick from afar.

Interviewed in March 2021 by The Washington Post’s Philip Rucker and Carol Leonnig, authors of A Very Stable Genius (2020), Mr Trump said that the events of 6 January were “too bad” and insisted that: “It was a loving crowd, too, by the way.”

The following June, he gave a press conference at his golf resort in Bedminster, New Jersey, at which he announced he would be suing the Big Tech giants for booting him off their platforms, falsely claimed that his name had not been mentioned in a bipartisan Senate report into the riot and attempting to retrain the focus onto the fate of Ashli Babbitt, one of his supporters shot dead that day.

A month later, he was telling Fox Business’ Maria Bartiromo, wrongly, that 1 million people had gathered to hear him speak at the “Stop the Steal” gathering and again claimed: “There was such love at that rally… They felt the election was rigged. That’s why they were there. And they were peaceful people. These were great people. The crowd was unbelievable.”

He again invoked Babbitt, characterising her as a martyr and misrepresenting her injuries, asking: “Who is the person that shot an innocent, wonderful, incredible woman, a military woman, right in the head?”

In October, Axios published leaked audio of the former president talking to ABC political correspondent Jonathan Karl in which he was asked about his supporters chanting “Hang Mike Pence!” and insisted it was “common sense” that they had done so because of their firm conviction that the election had been fixed.

The following February, Mr Pence returned to the public eye, telling the conservative Federalist Society: “I had no right to overturn the election. The presidency belongs to the American people and the American people alone. And frankly, there is no idea more un-American than the notion that any one person could choose the American president.”

Furious, Mr Trump hit back at his ex-veep, insisting in a statement that he could have “sent back” the election results and arguing that the House investigators should be probing Mr Pence.

“The Unselect Committee should be investigating why Nancy Pelosi did such a poor job of overseeing security and why Mike Pence did not send back the votes for recertification or approval, in that it has now been shown that he clearly had the right to do so!” he frothed.

The former president was in a more moderate, even remorseful mood when he spoke to The Washington Examiner a month later, saying of his erstwhile colleague: “Mike and I had a great relationship except for the very important factor that took place at the end. I haven’t spoken to him in a long time.”

Asked whether there was any chance of the two being reunited for another Trump-Pence ticket in 2024, Mr Trump answered, alluding to his fabled base: “I don’t think the people would accept it.”

Having surprisingly endorsed Mr Pence’s brother, Greg Pence, in his run for a third term as an Indiana congressman in April, by late May Mr Trump was openly laughing at the prospect of running against his own VP in 2024, after he had hinted to The New York Times that he could make a tilt of his own at the White House.

“That’s OK if he ran. I mean, I wouldn’t be concerned with that, that’s fine,” Mr Trump smirked to Fox Business.

That same newspaper has since revealed, citing comments from the president’s former chief of staff Mark Meadows, that he was also amused by the prospect of the Capitol rioters lynching Mr Pence, carrying that shocking line late last month.

Most recently, Mr Trump again addressed the failed insurrection at a rally in Casper, Wyoming, for GOP candidate Harriet Hageman, in which he again boasted about the size of the crowd he drew that day.

“I believe it was the largest crowd I’ve ever spoken before,” he beamed, before going on to, predictably, attack the House committee’s ranking Republican, Wyoming congresswoman Liz Cheney.

“As one of the nation’s leading proponents of the insurrection hoax, Liz Cheney has pushed a grotesquely false, fabricated, hysterical, partisan narrative, and that was the narrative of the day,” he said.

On Thursday 9 June, hours before the January 6 committee hearings were set to kick off, Mr Trump once again weighed into the issue, calling the mob the “greatest movement in the history of our Country to Make America Great Again”.

“The Unselect Committee didn’t spend one minute studying the reason that people went to Washington, D.C., in massive numbers, far greater than the Fake News Media is willing to report, or that the Unselects are willing to even mention, because January 6th was not simply a protest, it represented the greatest movement in the history of our Country to Make America Great Again. It was about an Election that was Rigged and Stolen, and a Country that was about to go to HELL..& look at our Country now!” the president wrote on his new social media platform, Truth Social.