Taylor Heinicke threw for 336 yards and two touchdowns in place of Ryan Fitzpatrick, including a drive that led to a 43-yard game-winning field goal by Dustin Hopkins to lead the Washington Football Team to a 30-29 win against the New York Giants on Thursday.

Hopkins looked to have missed a 48-yard field goal with five seconds left for the win, but Giants defensive tackle Dexter Lawrence was called for offsides on the play. It was one of 11 penalties for the Giants, and it led to a second chance for Hopkins, which he hit to give WFT (1-1) its first win of the season while dropping the Giants to 0-2 for the fifth consecutive season.

Giants coach Joe Judge said it was a tough lesson but he wasn’t going to put the loss on any one player or situation.

“He’s a good teammate, he’s fun to coach, he’s productive for us as a player,” Judge said of Lawrence. “There’s things we all need to do better as professionals.

“The important thing this time of the year, and all times of the year, is we keep improving going forward. We’re a better team today than we were four days ago. Now, was it good enough? No. We have to improve a lot? Absolutely. We’ve got to coach better. We have to execute better, down to situations in the game. I’ve got faith in the men in that locker room. I’ve got faith in the coaching staff keeping these guys moving in the right direction.”

Daniel Jones accounted for 344 of the Giants’ 391 yards, including 95 rushing. The Giants lost left guard Nick Gates in the first quarter to a fractured left leg.

Leading 23-20 with under seven minutes left, the Giants missed a chance to go up by 10 when an uncovered Darius Slayton couldn’t reel in a deep pass from Jones for a touchdown. After the play, the Giants false started twice on consecutive plays on third down and had to settle for a 55-yard field goal by Graham Gano for a 26-20 lead with 4:50 to go.

It only took Washington two plays to go ahead. Heinicke connected with J.D. McKissic for a 56-yard pass, then with Ricky Seals-Jones in the back corner of the end zone for a 19-yard TD.

It looked to be the game-winning score until James Bradberry jumped in front of Heinicke’s attempted pass to Terry McLaurin to put the Giants at the Washington 20-yard-line with 2:22 left. But the Giants could only get three yards on three plays and had to settle for Gano’s 35-yard field goal for the 29-27 lead, leaving the opportunity for WFT to drive for the win.

McLaurin led WFT with 11 catches for 107 yards and a touchdown. Sterling Shepard had 94 yards receiving for the Giants. 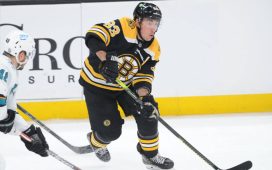 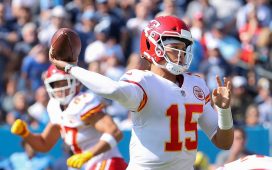 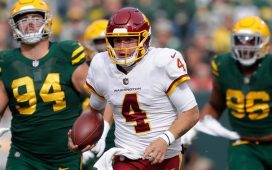