Welcome to the jungle: inside Mexico’s groundbreaking natural art gallery


Walking in, it is hard to tell where the jungle ends and the building begins. Thick green tendrils curl down from above, filtering light over paths of sinewy bejuco vine. Trees are everywhere: sprouting through the floor, bending polished concrete surfaces to their will and soaring towards the roof. The air is humid and carries a vegetal musk. It is less like being in a gallery than a vast grove, with slight Star Wars forest moon vibes. You wouldn’t be entirely surprised to find an Ewok hanging out in the canopy above.

As art spaces go, SFER IK Uh May is certainly unusual – and not only because it’s located in the forests of the Yucatan peninsula in Mexico, in what feels very much like the middle of nowhere. Opened in 2018, then closed again by the pandemic, the 10-acre complex aspires to be a new kind of museum, at harmony with its surroundings and open to the kinds of art that would never make their way into MoMA or Tate.

In a shady corner of the gallery – I’ve been asked to remove my shoes – a team of technicians is perched on scaffolding installing an artwork by the Japanese “botanical sculptor” Azuma Makoto: a large, teetering piece assembled using indigenous plants from across Mexico. As cacti, hot-pink bougainvillaea and snake plants are lowered into place on a wooden framework, Makoto supervises politely, snipping a leaf or two, or requesting that a spray of flowers be moved a few inches to the left.

As the growing cycle does its thing, the piece, called “Mexx”, will change beyond all recognition, he explains. “It’s living,” he says. “Some parts will come into flower, other plants will die back. In six months, it will be completely unrecognisable.” And after that? “We take it apart and give it to the community. It will go back to nature.”

In the last few years, sustainability has become the hottest of topics in the art world – as well it should, given that this most globalised of industries is estimated to produce roughly 70m tonnes of CO2 equivalent a year, more than some European countries. But in this corner of Mexico, the Argentinian self-taught architect, hotel owner, entrepreneur and (now) museum founder Eduardo Neira is attempting a unique experiment: to see if nature itself can be a kind of sustainable artwork.

Sitting in the equally extraordinary residence he designed for himself next door, Neira (who goes by the name Roth, for reasons that are somewhat cryptic) confirms that, yes, those are real trees inside the gallery, in fact nearly 200 of them – left untouched where they were growing while the museum was erected around them. “It’s not decoration,” he says. “It’s a profound effort to recognise that we are part of nature.”

Constructed by a large team of local craftspeople over a year, SFER IK is made up of a broad dome, punctuated with log bridges that lead into the trees beyond, and surrounded by a flower-filled garden where you can lounge and absorb the jungle views. From a distance, it looks rather like a rock formation growing out of the forest. I keep thinking of Victorian tropical houses such as those at Kew Gardens – but then of course this is actually in the tropics, where many of those plants come from.

Rather than being another identikit white-cube-style art space, the architecture aims to be “biophilic”, says Roth: embracing the jungle rather than rejecting it. “We live in boxes. We play in squares. We work in squares. We study in squares. Our mind is a square.” How did they decide on the building’s form? It was largely improvised on site, he replies. “No plans, not even a measure.”

Whatever the exact truth of that, there are no right angles in view, with undulating floorscapes and curvilinear windows giving on to the greenery. Back inside, I ask SFER IK’s new director, the Brazilian curator Marcello Dantas, if it isn’t a nightmare to stage exhibitions in. He nods enthusiastically: that’s very much the point. “The approach here is perceptual. Our approach is to ask artists to create something original, site-specific, organically constructed.”

Unlike most museums, SFER IK doesn’t possess a collection, and can’t offer the strict environmental conditions required to display many artworks (it seems unlikely that anyone would lend a Rothko or Gentileschi if it risked being covered in leaf mould). Indeed, simply getting sculptures or paintings along the dirt track leading from the nearest village would be hard, Dantas explains.

But they’re trying to use this as a spur to interdisciplinary imagination. “Sure, the vegetation inside means that the humidity changes, which means that oil paint will find this environment difficult. But oil paints didn’t invent art. Just use a different kind of paint!”

Instead, Dantas adds, they take their inspiration from the original meaning of the word “museum”, which derives from the Greek mouseion, meaning “temple of the muses”. “A temple of the muses is a place you come to be inspired. And that’s exactly what this is.”

Funding comes chiefly from Roth’s own Azulik eco-hotel resort along the coast in Tulum, which has become hugely fashionable in recent years and now claims to be the most Instagrammed hotel in the world). Like the resort, which relies on an incessant stream of foreign visitors flying into Cancún airport – among them, of course, me – the ecological credentials of the museum seem a little questionable. Despite the use of local materials, the building also employs concrete and fibreglass, there are air conditioning units hidden among the plant life, and, on a peninsula whose delicate ecosystem is threatened by overdevelopment and water pollution, electricity and water are drawn from the municipality.

But Roth insists that SFER IK’s overall carbon impact is low, and it’s as much a symbol as anything else. “The only thing that makes sense for me is to do as much as I can to reconnect people with nature.”

The last 30 years have seen a revolution in our understanding of what museums are and where they can be situated. One part of the new museum world has materialised in struggling post-industrial cities such as Bilbao (Guggenheim), Gateshead (Baltic) and Lens (Louvre-Lens), which have tried to revitalise local economies and draw art lovers to locations few would have visited before. Another has tried to explore relationships between collections and landscape: think of the Tadao Ando-designed Chichu Art Museum, burrowed deep into the Japanese island of Naoshima so that the Monets on its walls blend seamlessly into views of the sea, or of Spain’s Planta Project, created inside a dusty industrial estate not far from Barcelona.

Other institutions seek to rewire what museology actually does – among them Zagreb’s Museum of Broken Relationships, opened in 2010, which invites anyone to send in artefacts commemorating love affairs that have gone wrong. Dantas himself has run the interactive Museum of the Portuguese Language in São Paulo and the Museo del Carnaval in Colombia.

Another context for the project is the art world’s increasingly guilty attempts to live up to its ecological aspirations and reduce its hefty impact on the planet. In the last few years, museums including Tate, Sweden’s Moderna Museet, the Courtauld and the Natural History Museum have declared a climate “emergency”, pledging to reduce energy consumption, cut down on shipping works by plane, recycle exhibition materials and more. Under the umbrella of the Gallery Climate Coalition (founded in 2020), even small commercial spaces have pledged to end their addiction to long-haul flights.

In a globalised and hyper-connected art world, in which curators, gallerists and collectors have become used to jetting from Middle Eastern art fair to European biennale to North American opening, this is a challenge, Dantas admits: when we speak, he’s just off the plane from SXSW in Texas, and will shortly be flying back to Brazil.

Does he not worry about the impact of art tourism, especially on this fragile corner of the planet? “Everything has a footprint. The challenge is to make it sustainable.”

We stroll back towards Makoto’s sculpture, which is slowly acquiring colour as flowering plants are set in place. A river of thick leaves cascades shaggily down one wooden leg. At the summit, a technician is manoeuvring a small palm tree, which sticks jauntily upwards like a quiff.

Dantas pauses next to a tree, placing his hand against the bark. It would delight him if creatures from the jungle trotted or flew inside and responded to the art, he says with a twinkle. “Just as the architecture had to respect the trees, the artists will have to respect the trees; they’re going to have to find a way to cohabitate.”

He gestures around. “Wouldn’t this be a good watchword for all of us species, as we face the future?” 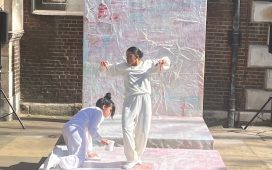 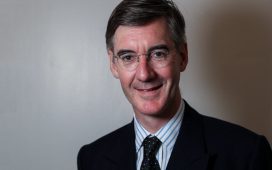