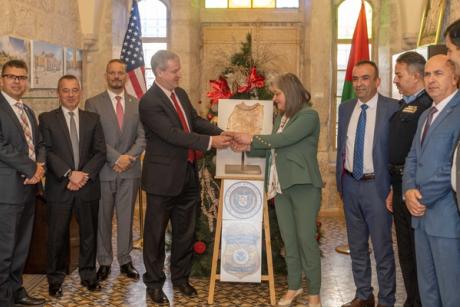 The US government has returned a nearly 3,000 year old ivory artefact to its rightful home in Palestine, marking the first time a cultural object has been repatriated from the United States to the Palestinian people.

The object was seized during a year long investigation into the New York financier Michael Steinhardt, who admitted in a 2021 settlement deal that his $70m trove of antiquities included more than a hundred purportedly stolen objects. The artefact in question has been identified as an Assyrian ivory cosmetic spoon, dating from between 800BC and 700BC, which was designed to deposit incense onto fires during religious ceremonies. The Israeli antiquities dealer Gil Chaya sold the spoon to Steinhardt in 2003.

During a ceremony at the Ministry of Tourism and Antiquities in Bethlehem last week, the Palestinian minister Rula Maayah said that the object “acquires its real significant and archaeological value in its authentic location”—a sentiment echoed by Geoge Noll, chief of the US Office of Palestinian affairs, who declaired the repatriation a step towards “building mutual understanding, respect, and partnership”.