US Immigration and Customs Enforcement (Ice) has shut down a national hotline that connected detained migrants to an advocacy group, a month after the hotline was featured in a storyline in the final season of the hit TV series Orange is the New Black.

Founded in 2013, the hotline connected migrants in the world’s largest immigration detention system with advocates at Freedom for Immigrants, which also consulted for the award-winning Netflix production and was named in the show.

Freedom for Immigrants runs and supports visitation programs in detention centers. It sent a cease-and-desist letter to Ice, alleging the government agency was retaliating and violating its right to exercise free speech after its profile grew.

“Ice is attempting to silence its critics and block people in immigration detention from connecting with communities on the outside,” said Christina Fialho, the group’s co-executive director. “It’s disappointing, but not unexpected, that Trump’s Ice would engage in such cruel and undemocratic behavior.”

Ice did not immediately respond to a request for comment.

Its phone system is operated by Talton Communications, which is mandated to provide free extensions to groups such as the UN refugee agency, consulates and Freedom for Immigrants.

Freedom for Immigrants had three pro-bono extensions operating in detention centers when Donald Trump took office. Ice shut down two of the extensions before the final one was closed on 7 August.

Fialho said the cease-and-desist letter was the first step in potential litigation, though the group was hoping to avoid court.

“We very much hope we can resolve this amicably, but our team is also ready to enforce our rights under the constitution,” she said.

Before Ice shut down the hotline it closed more than a dozen of Freedom for Immigrants detention center visitation programs. They were ultimately reinstated.

The final season of Orange is the New Black focuses on the immigration detention system, which is run by Ice, and highlights how difficult it is for people in prison to contact family or friends because of the high cost of making phone calls in detention.

In one scene, Gloria (Selenis Leyva) tells Maritza (Diane Guerrero) about the hotline and warns: “You gotta be careful, though. Apparently as soon as Big Brother figures out you’re using the hotline, they shut it down.”

Fialho said the hotline was important for helping migrants connect with the outside world.

“We would get calls from people who hadn’t been able to communicate with family members to tell them they’ve been taken by Ice, that they are in this particular immigration detention facility,” she said.

While the extension number was supposed to be written on a sheet available to migrants in every detention center, Fialho said Ice had never made it easily available and people learned about the hotline through word of mouth instead.

Now that the extension is gone, detained migrants can still use the Freedom for Immigrants hotline, but the group will have to shoulder the cost. The extension was also supposed to be unmonitored. Ice can listen in on a normal call.

Orange is the New Black actors including Guerrero, Emily Tarver and Laura Gómez signed a letter to Ice demanding the hotline be restored. 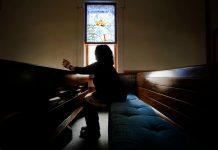