Equine obesity is considered one of the most pressing welfare concerns for horses in Britain, as many horse owners are unable to recognize that their horses are overweight, a new study shows.

University of Liverpool veterinarians Drs. Tamzin Furtado, Elizabeth Perkins, Gina Pinchbeck, Catherine McGowan, Francine Watkins and Robert Christley found that between 31 and 54 percent of Britain’s horses are overweight. More horses than ever are being used as hobbies, meaning that the horse-human relationship and the ability to care of the horse well are central to horse ownership.

Ownership in this manner, which focuses on relationships and time spent together, brings complex dynamics regarding weight into play. Canine obesity is intricately tied to the human-animal bond, in which the dog is “humanized,” blending the line between human and animal. The scientists set out to determine if the same forces were at play in the horse-human bond that might cause owners to feed their horses too much.

British horse owners consistently underestimate how much their animal weighs and they believe a horse’s weight is affected by his job and breed. For example, owners may believe that a show horse can be fatter than an event horse and that a draft breed can consistently weigh more than a lighter breed.

To study the issue, the researchers used 16 threads on online discussion boards, and completed 28 interviews with leisure horse owners, and 19 interviews with equine professionals; they also used two focus groups made up of 21 additional horse owners. They discovered that owners found it difficult to determine what “fat” is compare to how they think a horse should look.

When the owners became aware that the horse’s weight could be a threat to their health, but could also be changed, they likened the challenge of removing the weight to a war. They believed weight management was difficult and that it would negatively affect the horse-human relationship.

Once an owner recognized that their horse was overweight, they had to shift how they saw the horse—the extra weight not longer indicated that the horse was in good health; it represented a health problem. How the owners thought the horse looked with regards to weight were reflected in the language owners used.

Though owners knew what steps should be taken to remove excess weight from their horses, such as ramping up exercise or limiting caloric intake, they were sometimes reluctant to take the necessary steps for fear of damaging the horse-human bond, the researchers report. The conclude that adjusting the social norm of overweight horses being OK could be done by celebrating and promoting healthy horse weight. They note that management strategies that maximize horse welfare, like living in herds or turnout on dry lots, would make weight management more positive.

Turns Out, Milkshaking May Not Do Much For Performance After All

Curlin’s Honor To Stand At Pleasant Acres Stallions In Florida 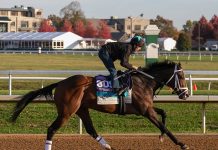 Sheppard To Send String Of Steeplechasers To Ireland