“Kevin Campbell is the Englishman with the most Premier League goals without being capped for his country. Who are the equivalent players in the other top five leagues?” asks Masai Graham.

Adam Wilson was the first to do the hard yards on this question so we’ll let him kick things off. “In Italy the journeyman forward Nicola Amoruso – nicknamed ‘Hot Foot’ – racked up 113 Serie A goals in 380 appearances spread across, a frankly silly, 13 clubs from 1993-2010. He was most potent at Reggina (40 goals) but also found the net for Juventus, Napoli and Parma. Although never earning a senior Italy cap, he did represent the Under-21 side.

“In France, Francois ‘Fanfan’ Félix scored 120 goals in 341 appearances for six clubs spanning 1968-81. He never represented France despite being part of the 1978 Uefa Cup finalist Bastia side. He was also a regular scorer for Nimes and Paris FC. To Germany, where Thomas von Heesen netted 100 times in 378 Bundesliga appearances – with 99 of those strikes being for Hamburg – in a career spanning 1980-97. As an attacking midfield player rather than a pure forward, he might feel particularly aggrieved to not have won a cap for West Germany or Germany.

“The title of most top-flight goals without a cap in Spain seems to be shared at 139 goals between Manuel Badenes (199 appearances) and Juan Araújo (207). Badenes (1946-59) was overlooked despite scoring 90 goals in 97 appearances for Valencia and a ludicrous eight goals in two appearances for Spain B. Araújo was a contemporary, scoring all his goals in a nine-year spell at Sevilla (1945-56).

“And we’ll finish back in England. While Campbell holds the Premier League record for most goals by a non-capped English player (83 in 325 appearances), this isn’t really a direct comparison since the other leagues acknowledge football wasn’t invented in 1992. A more fitting candidate is Arthur Chandler, who was never capped by England despite scoring 203 goals in 309 First Division appearances for Leicester from 1925 to 1935.”

A tip of the hat too to Kári Tulinius and Dirk Maas for arriving at some of the same answers but both finding an improved offering in Germany – if Olympics appearances do not exclude a player, whereby Fritz Walter scored 157 goals and represented West Germany at Seoul 88. And, if we veer away from the “top five leagues”, Dirk can offer up João Lourenço as Portugal’s most prolific uncapped domestic scorer with 134 goals between 1961-72, Leo van Veen (Netherlands – 176 goals between 1965-83) and Patrick Goots (Belgium – 154 goals between 1988-2004).

Thanks also to Dan Almond, who picked out some prolific uncapped scorers but their goals were in leagues outside the nation they were eligible to represent, which is a deviation from the original question. Delio Onnis scored 299 Ligue 1 goals between 1971-86 – and was the league’s top scorer on five different occasions – but was snubbed by Argentina due to a policy of favouring domestic players. “The same is true of Brazilian striker Vinício, who played the vast majority of his career in Italy, scoring 155 Serie A goals, but was excluded from the national side for doing so,” adds Dan. “Despite qualifying to play for the Italian national team, Vinício chose not to.”

Finally, this 19-year-old Knowledge article picks out some other high-scoring non-capped players in the Premier League.

Michael Haughey writes: “In 2004 Real Madrid v Real Sociedad was abandoned in the 88th minute because of a bomb threat. The score was level at 1-1. The remaining two minutes, plus an agreed four minutes of injury time were played three weeks later in January 2005 and Madrid scored a winner from a penalty.”

Players with most managers at a single club (2)

Last week, we thought we had a winner when we found that Francesco Totti and Javier Zanetti both played under 19 managers at Roma and Inter, respectively. Álvaro Blanch has written in with a player who can beat that total by three managers.

“From 1984 to 1996, coinciding mostly with the wild years of the notorious Jesús Gil as Atlético Madrid president, right-back Tomás Reñones endured a total of 30 managerial switches and played under 22 different managers. Reñones won his first and only league title in his final season at the club, as part of the domestic double achieved under Raddy Antic.”

“With the announcement that Coventry City are planning to build a new stadium, has there ever been a shorter amount of time between a club putting up a new ground, moving in and then playing there, and then planning to build/building another?” wondered Sam Hind in January 2014 (and it’s worth adding that this didn’t actually end up happening). “In Coventry’s case it is only eight years since they first played at the Ricoh Arena; surely that’s some kind of record?”

If you look back to the Football League’s formative years it is probable that plenty of clubs can eclipse Coventry in the ground-hopping stakes – Walsall, for example. The club moved to a purpose-built ground in West Bromwich Road in 1893, but three years later they were off to another newly-opened venue – their Hillary Street ground, aka Fellows Park, the ramshackle majesty of which is captured in rather lovely fashion in this blog. But in those days, of course, clubs would move grounds almost as often as today’s teams change their kits. More recently Juventus could tolerate the Stadio Delle Alpi, built for the 1990 World Cup, for only 16 years before it was demolished to make way for their new stadium.

“Just home from the Charlton v Ipswich at The Valley where there were four goals in stoppage time at the end of the second half (not to mention Ipswich’s stoppage-time goal at the end of the first),” writes James Noblet. “Is this the most goals after the 90 minutes is up – if not, it surely must have the highest-goals-per-minute of additional time to be played given the fourth official only put up six minutes.” Readers, have there been more than four goals scored in injury time? The final goal was actually scored on 90+9min so that will have to be factored in to the goals-per-minute ratio.

“The Cambridgeshire derby took place as a league game for the first time since 29 December 2001 when Cambridge United lost 1-0 to Peterborough United at London Road – a gap of almost 21 years with just three paltry (and sparsely attended) EFL Trophy group-stage meetings between the heated Fenland rivals in the intervening period,” begins James Smither. “What is the longest interval between games in a genuine derby/local rivalry? Or as an alternative/bonus extra: which genuine derby/local rivalry has had the fewest overall meetings? (Cambridge v Peterborough has happened only 48 times as a league fixture).”

“As it stands, the top three teams in the Women’s Scottish Premier League (Celtic, Glasgow City, Rangers) all have a 100% record after eight, eight and seven games, respectively. Has any other league had three teams (or more) with 100% after so many games?” asks Mark Mills. 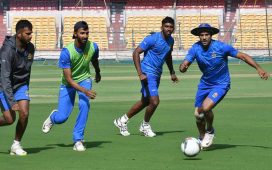 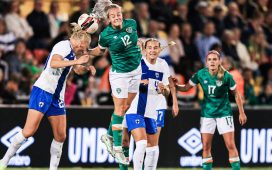