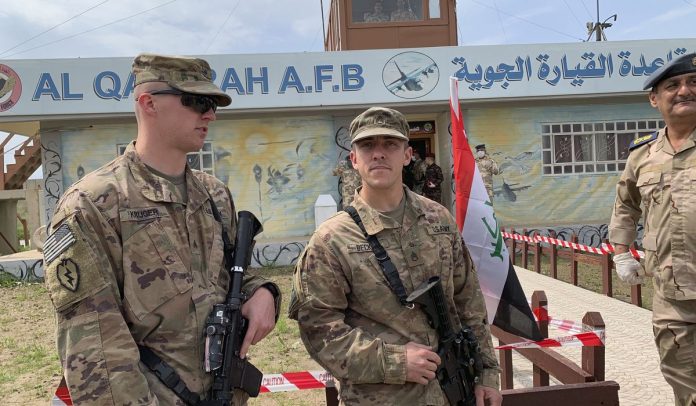 A key northern Iraqi military base that was at the center of recent tensions between U.S. and Iran-backed forces in the area became the face of a widening American drawdown from Iraq on Sunday.

U.S. officials said they turned over operations, as well as some $1.1 million in equipment, to Iraqi Security Forces at K1 Air Base near Kirkuk, making it the third Iraqi outpost U.S. and allied forces have left just in the past month.

Amid reports claimed the Trump administration is clandestinely preparing a military offensive against Iran-backed militants in Iraq that have clashed with American and allied forces, there was no indication Sunday that the movement of some 300 U.S. and other international forces from K1 was tied to such preparations.

U.S. officials instead inside that the troop movements were planned months ago and were set in motion by the U.S.-led international coalition has had in breaking the Islamic State’s hold on territory in Iraq and Syria.

A statement Sunday by the U.S.-led coalition in Iraq insisted the pullbacks “are not related to recent attacks by Iraqi Shiite militias — which U.S. officials say were planned in coordination with Tehran. The statement said they are also unrelated to coronavirus developments in Iraq, and fit with U.S. plans to consolidate the deployments of an estimated 5,000 U.S. troops in Iraq.

U.S. Brig Gen. Vincent Barker noted that the base near the Kurdish city of Kirkuk was essential to the fight in recent years against Islamic State safe havens in the nearby Hamrin Mountain. Kurdish forces in recent months have said Islamic State remains active in the region.

But K1 was also the target of a rocket strike in late December that killed an American contractor, triggering a series of tit-for-tat attacks that included a deadly U.S. drone strike on senior Iranian commander Gen. Qassem Soleimani and an Iranian retaliatory salvo that left over 100 U.S. service personnel with lingering brain injuries.

The attacks nearly put Iran and the U.S. on the path to open conflict, and leading politicians allied to the Shiite militias have stepped up a campaign demanding at all U.S. forces withdraw.

The New York Times reported Friday that the Pentagon has ordered U.S. commanders to prepare a campaign to destroy the leading Shiite militia, Kataib Hezbollah, which has carried out attacks against American troops. The top U.S. commander in Iraq, Lt. Gen. Robert P. White, reportedly strongly advised against such a clash, the newspaper said.

None of the options facing the White House are optimal, according to Kirsten Fontenrose, a former top National Security Council adviser in the Trump administration who now heads the Scowcroft Middle East Security Initiative at the Atlantic Council.

“The number of violent attacks on U.S., Iraqi, and international troops and civilians by Iran-directed paramilitary groups in Iraq has escalated in the past two weeks at an alarming rate,” Ms. Fontenrose wrote in an analysis published by the think tank last week.

She said uptick was likely ordered by Iranian leaders seeking to use the coronavirus pandemic as cover to make advances inside Iraq, and that Tehran should be wary of how Washington may respond.

“Tehran is betting that the world is too consumed with managing a pandemic to hold them accountable — and that the U.S. administration is unwilling to stay the course in Iraq because it is too gun-shy in an election year and too financially strapped by the coming burden of U.S. unemployment,” Ms. Fontenrose wrote. “[But] the implications of a global pandemic make that a risky bet.”

“The one variable that the regime in Tehran may not have considered is this: their assumption that [President Trump] is loath to start a war with Iran is based on conditions that pre-date coronavirus,” she wrote. “With U.S. unemployment skyrocketing, the prospect of ramping up military engagement begins to look like an economic stimulus package and federal jobs program.”

U.S. commanders in Iraq on Sunday said coalition forces are being consolidated in Baghdad and at the Ain al-Asad Air Base. Forces have already withdrawn this month from the Qayyara base in Nineveh province and the Qaim base near the border with Syria.

U.S. Army Col. Myles Caggins, a spokesman for the coalition, said troops have so far been relocated to other bases and some will head home in the coming weeks. He said additional withdrawals are planned “in the coming days.”