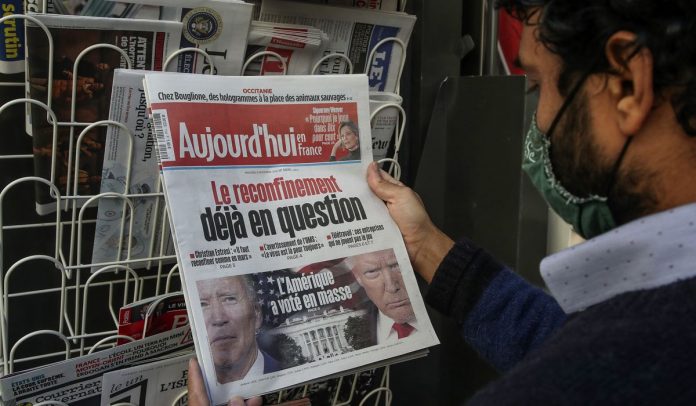 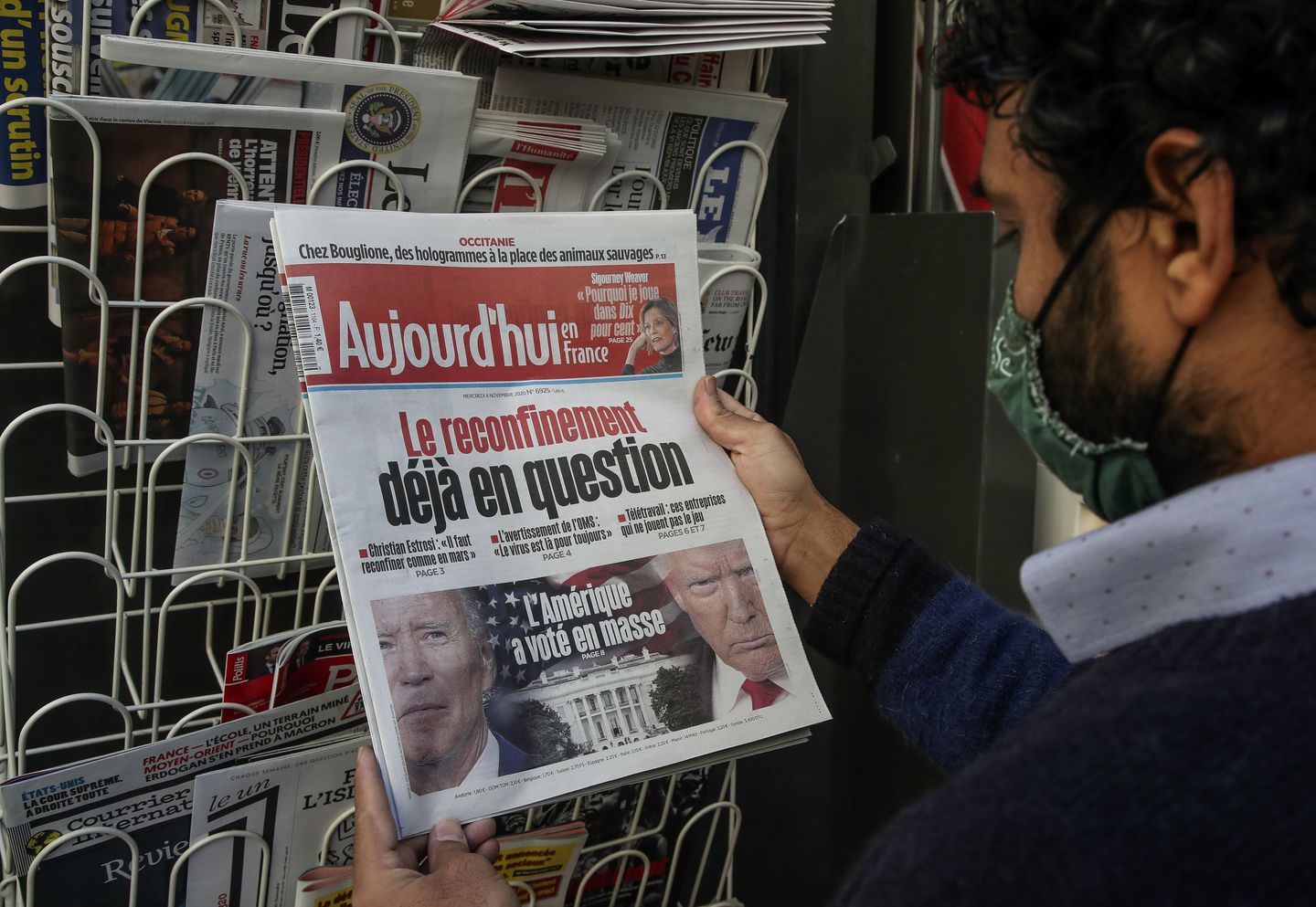 News networks in the Middle East have been running around-the-clock coverage of the U.S. presidential race.

Despite COVID-19 restrictions, crowds have gathered since Tuesday, huddling late into the night around television sets and radios outdoors, at bars or in private homes from Tokyo to Jerusalem, London to Johannesburg in anticipation of final vote tally.

The home page of Russia’s state-run Tass News Agency has been blanketed with stories about the bitter battle between President Trump and Democrat Joseph R. Biden, with detailed breakdowns on key battleground states such as Michigan and North Carolina.

And some are already speculating the cliffhanger ending will leave whichever candidate wins with a very uncertain mandate for foreign and security policy over the next four years.

In a testament to America’s staying power as the leading global superpower, the fight for the White House contest is being greeted with interest and enthusiasm befitting a heavyweight “pay-per-view” fight — with world leaders and citizens alike gobbling up each new twist.

“There is no question the people of the world are watching this on the edge of their seats,” said Said Arikat, a prominent international affairs expert and Washington-based journalist with Al Quds, the largest-circulation Palestinian newspaper.

“This is the most watched and reported on election in history, simply because America remains the only present power in the world,” Mr. Arikat said in an interview Wednesday.

Some world leaders are clearly watching for a chance to capitalize on the moment of uncertainty and distraction in Washington. National security sources warn rivals such as China and Russia are looking to exploit the very public divisions on display in Tuesday’s vote in hope of weakening Washington’s influence abroad.

At the same time, allies in Europe and Asia, frequently the target of Mr. Trump’s ire, are eager to learn whether his brash, china-breaking presidency is a historical anomaly or the harbinger of a long-lasting change in America’s relationship with its traditional postwar allies.

The combination of high stakes and sheer entertainment value, playing out in the social media age, has created an irresistible spectacle for friends and foes alike.

“It is pay-per-view,” said Jim Townsend, former deputy assistant secretary of defense for European and NATO policy during the Obama administration. “Everyone is glued to their TV.”

“There’s a lot to be entertained by, even if you don’t speak English,” he told The Washington Times on Wednesday. “From a foreigner’s perspective, I think once again we’ve surprised them. … No longer can you expect what the U.S. is going to do. The unpredictability of the U.S. has really underlined itself.”

“The battle for the legitimacy of the result, whatever the outcome, has begun,” she said in an interview with German television channel ZDF. “This is a very explosive situation, a situation of which the experts rightly say it could lead to a constitutional crisis in the United States. And that is something that must certainly be of great concern to us overall.”

And Konstantin Kosachev, an ally of President Vladimir Putin and long a leading voice of foreign policy in the Russian parliament, said it could be Moscow who suffers if the U.S. election dispute dragged on.

“It’s better for Russia if there is a decisive result, so that the loser will not resort to claims of foreign interference,” Mr. Kosachev said. “It’s time for America to return to the politics of sanity.

Not a major factor in the campaign, foreign policy could feel a major impact from the result.

Mr. Trump and his supporters have argued that the commander in chief’s new approach to governing, blunt manner of speaking and penchant for challenging economic and diplomatic norms have improved respect for American power in the world. They point to his personal diplomacy with North Korean leader Kim Jong Un or his moving of the U.S. Embassy in Israel to Jerusalem to argue that Mr. Trump’s unique style sets him apart from his predecessors.

Critics, including Mr. Biden and his advisers, charge that the Trump era has damaged the U.S. reputation in the world and made it more difficult for governments to trust what Washington says. They also fear that the damage is likely to endure, as foreign officials conclude from the tight 2020 race that a large slice of the American electorate likes Mr. Trump’s no-holds-barred brand of politics, his trade protectionism and his transactional foreign policy.

“Foreign allies and adversaries can no longer assume Trumpism was an aberration. It will inform our room for maneuver and ability to make deals,” John Sipher, a retired intelligence official who spent 28 years in the CIA’s Clandestine Service, said in a Twitter post.

“Our credibility is forever weakened,” he asserted.

Foreign officials largely shied away from commenting an election that still hung in the balance. But some say the Trump years ­— and Tuesday’s wafer-thin result — likely signal a permanent shift.

“Let’s not kid ourselves. The United States has not been a friendly partner to European states for several years now,” Bruno Le Maire, France’s minister of the economy and finance, told his country’s Radio Classique. “Whether Joe Biden or Donald Trump is elected by Americans … nothing changes this strategic fact. The American continent has detached itself from the European continent.”

Mr. Trump has upset NATO and East Asian allies with his very public demands they pay more for their defense, and his unwavering efforts to withdraw U.S. troops from war zones in Afghanistan, Iraq, and especially from Syria have raised questions about America’s long-term military commitment to its allies.

Mr. Trump’s first term was marked by a steady stream of withdrawals from multilateral pacts and institutions that the president says have weakened U.S. power and constrained U.S. freedom of action, from a pan-Asian trade to and the Paris Climate Accord to the Iran nuclear deal, the World Health Organization and nuclear arms treaties with Russia.

At least one was ready to back Mr. Trump’s election-night claim that he had won the vote.

Foreign policy experts say the divisive atmosphere in U.S. domestic politics is matched by sharply divided attitudes toward the U.S. and Mr. Trump around the world.

“The polarization that’s happening in the United States is also happening around the world and in the Middle East, where you have some countries that are lined up with Trump, while others are just not at all lined up with him and won’t be,” said Mr. Arikat.

As the results trickled in, many international officials were holding back, urging everyone — including the two U.S. candidates — to be patient.

“This election is not over and it won’t be over until all of the votes have been counted,” said Irish Foreign Affairs Minister Simon Coveney, according to the Irish Independent newspaper. “So I think it’s unwise for anybody, regardless of who they are, to be declaring a result.”

A host of other foreign officials, from Germany to Australia, also voiced strong support for the American democratic process and that it is in the best interest of the U.S. and the world to ensure all votes are counted.

China’s state-run press has chronicled in deep detail the contentious final days of the U.S. campaign and the widespread charges on both sides of foul play. But Beijing, like the rest of the world, was in a wait-and-wonder mode Wednesday.

Calls to investigate possible link between menopause and Covid risk 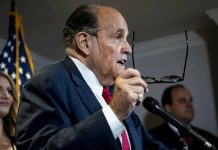 Poland says it's not backing down ahead of EU budget summit 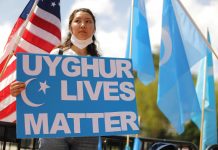 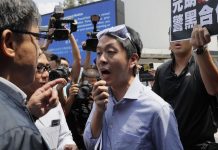 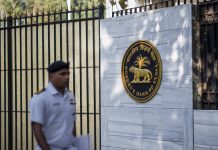 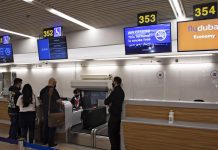 Kimchi: from field to lunch – in pictures 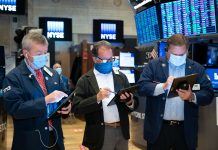 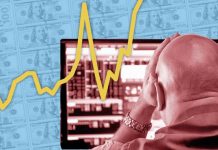