A Trump-endorsed congressional candidate has won the Republican primary in West Virginia, as a contest in Nebraska provided yet another test of the former president’s sway over the party at the start of midterm season.

McKinley was sharply criticized by the former president when he broke with his party as one of 13 Republicans to vote with the Democrats to support Joe Biden’s $1.2tn infrastructure bill. Trump called McKinley a RINO, or “Republican in Name Only” and endorsed Mooney the day Biden signed the infrastructure law.

The two incumbents, who have taken dramatically different approaches to their time in office, were pitted against each other in the state’s second congressional district after population losses cost West Virginia a US House seat.

Elsewhere, voters in Nebraska voters also headed to the polls on Tuesday in a bitter Republican primary race for governor. The race was upended in recent weeks after a leading candidate endorsed by Trump was accused of groping at least eight women over the last few years.

Charles Herbster, a businessman and cattle breeder who has denied the allegations, is in a nine-way GOP primary to replace Republican governor Pete Ricketts, who’s prevented by term limit laws from running again. Other leading candidates include Jim Pillen, a veterinarian and hog farm owner endorsed by Ricketts, and state senator Brett Lindstrom, an Omaha financial adviser who gained traction recently with a surge of money and support from the city’s Republican mayor.

Results in the Nebraska race had yet to be called an hour after polls closed. The winner will emerge as a strong favorite in November’s general election in Republican-dominated Nebraska.

The races in Nebraska and West Virginia are providing some measure of the former president’s enduring sway with GOP voters. They come on the heels of a victory in Ohio by JD Vance, author of the bestselling memoir “Hillbilly Elegy”, who defeated six other candidates to win the Republican primary for US Senate last week. Vance was also endorsed by Trump.

The former US president is facing some of the biggest tests of his influence in Republican primary elections later this month. In Pennsylvania, his endorsed Senate candidate, Dr Mehmet Oz, is locked in a competitive race against former hedge fund CEO David McCormick and five others, while his candidate in North Carolina, US representative Ted Budd, is competing in a field that includes a dozen other Republicans.

In Georgia, Trump has endorsed primary challengers to governor Brian Kemp and secretary of state Brad Raffensperger, both of whom defied him by rejecting his false claims of voter fraud in the 2020 election.

In a story last month, the Nebraska Examiner interviewed six women who claimed Herbster had groped their buttocks, outside of their clothes, during political events or beauty pageants. A seventh woman said Herbster once cornered and forcibly kissed her.

In Nebraska, the allegations against Herbster, a longtime supporter of Trump’s, didn’t stop the former president from holding a rally with him earlier this month.

“I really think he’s going to do just a fantastic job, and if I didn’t feel that, I wouldn’t be here,” Trump said at the rally at a racetrack outside Omaha.

Some voters said the allegations didn’t dissuade them from backing Herbster either.
As she voted at an elementary school in northwest Omaha on Tuesday, Joann Kotan said she was “upset by the stories, but I don’t know if I believe them”. Ultimately, the 74-year-old said she voted for Herbster “because President Trump recommended him”. 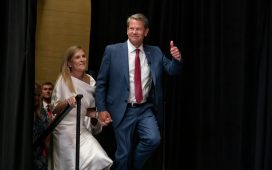 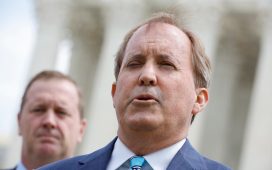 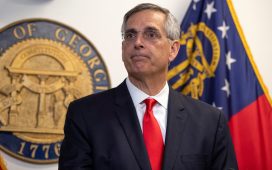 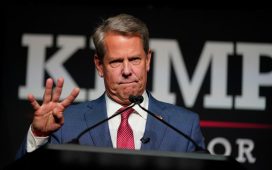 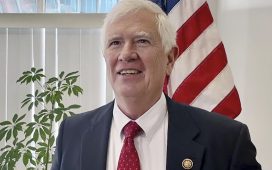