The stakes got a lot bigger last Saturday for horses on the road to the Triple Crown with the Grade 2, $400,000 Risen Star Stakes at Fair Grounds in New Orleans, La. The nine-furlong race is the first of seven contests that will offer 85 Kentucky Derby qualifying points (50-20-10-5 to the first four finishers), virtually assuring the winners will get into the Derby field.

A number of very good horses have come out of the Risen Star (formerly known as the Louisiana Derby Trial Stakes, including the one-two finishers in 2019: War of Will, who would win that year’s Preakness, and Country House, who was awarded the G1 Kentucky Derby via disqualification of Maximum Security for interference.

Three years earlier, the Risen Star was won by Gun Runner, who would go on to win the G2 Louisiana Derby, finish third in the Kentucky Derby, and take seven of his final eight career starts, capped by the G1 Breeders’ Cup Classic and G1 Pegasus World Cup Invitational.

The El Camino Real Derby’s heyday was back in the 1980s and ’90s, when a trio of Preakness winners were victorious in the race (Tank’s Prospect in 1985, Snow Chief in ’86 and Tabasco Cat, who also won the Belmont Stakes, in ’94). Two El Camino winners went on to finish second in the Kentucky Derby: Casual Lies in 1992 and Cavonnier in ’96.

The race has had little impact on the Triple Crown since Golden Gate went to the Tapeta synthetic surface in 2007.

Following is a glance at the Risen Star and El Camino Real Derby, along with my grades for the winners, which are based on how the horses looked, what Beyer Speed Figure they received, historical significance of the race and perceived quality of field.

The three horses who finished within a length of each other in the G3 Lecomte Stakes at 1 1/16 miles at Fair Grounds on Jan. 16 were back: Midnight Bourbon won the Lecomte, with Proxy second and Mandaloun third. The late-running Senor Buscador, winner of the Springboard Mile last out at Remington Park in Oklahoma Dec. 18, was a new addition to a mostly local lineup of 11 starters.

Midnight Bourbon and jockey Joe Talamo did not get the lead as they did in the Lecomte, usurped by Rightandjust, who crossed over from the outside post and went pretty quickly for the opening quarter mile (:23.65). Midnight Bourbon raced off Rightandjust’s right flank, about a length ahead of Mandaloun and Florent Geroux, who were three wide throughout but more engaged than in the Lecomte after the addition of blinkers by trainer Brad Cox. Proxy, with John Velazquez up, was a close fourth for the opening half mile, running in spurts and slipping back going into the far turn after a second quarter mile in :24.80 and a third quarter in :24.29 (for half-mile and six-furlong splits of :48.45 and 1:12.74). 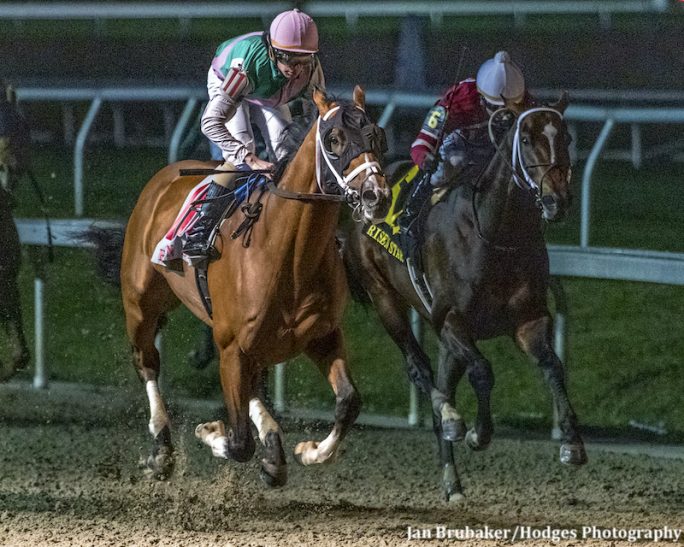 Midnight Bourbon poked his head in front of Rightandjust inside the quarter pole but Mandaloun quickly was alongside and began to edge away from the Lecomte winner. The fourth quarter went in :24.76 and Mandaloun ran his final furlong in :12.89 for a final time of 1:50.39 on a fast track.

Proxy ran an uneven race but finished with interest out in the middle of the track, closing from four lengths back after six furlongs and two lengths back at the furlong pole to draw within a 1 ¼ lengths of the winner. If the son of Tapit out of the multiple G1 winner Panty Raid (by Include) puts it all together he will be a tough customer in a rematch with Mandaloun.

The winner received a 98 Beyer Speed Figure, a big improvement from the 89 he got in the Lecomte and the third successive improved figure since his debut at Keeneland last fall. The blinkers, along with more racing experience, have turned Mandaloun into a very legitimate Kentucky Derby prospect for owner-breeder Juddmonte Farms and for Cox, who also has 2020 2-year-old male champion Essential Quality and Oaklawn’s Smarty Jones winner Caddo River in his quiver.

Michael McCarthy-trained Rombauer was the 6-5 favorite while making his first start since a fifth-place finish behind Essential Quality in the G1 Breeders’ Cup Juvenile at Keeneland last November 6. He was entered and scratched from the G3 Robert B. Lewis Stakes on Jan. 30, reportedly at the request of the owners/breeders, John and Diane Fradkin, who preferred the El Camino Real Derby.

This was the Twirling Candy colt’s first race over a synthetic surface, though he began his career on turf, winning his debut last July going a mile at Del Mar, then finished sixth in the Del Mar Juvenile Turf. He then ran a good second on dirt to Get Her Number in the G1 American Pharoah Stakes at Santa Anita Sept. 26. Then came the Breeders’ Cup, in which Rombauer broke from the 13 post in a 14-horse field, was 13 lengths back after a half mile, weaved through traffic and gained steadily in the short stretch at Keeneland to be beaten 6 ¼ lengths. 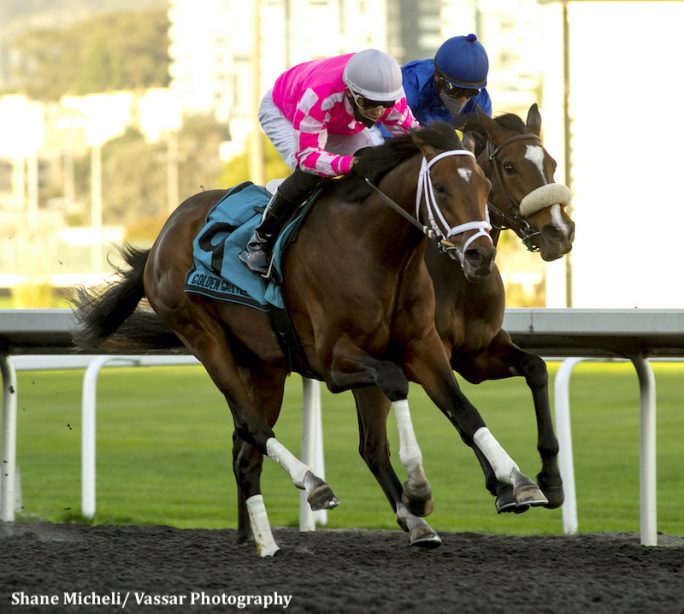 In the El Camino Real, Rombauer dropped back to last under Kyle Frey as It’s My House set steady fractions of :24.00, :47.81 and 1:12.20 for six furlongs. Frey made a wide move on the turn and was up in the final yards to beat the filly Javanica by a neck, completing the distance in 1:51.64 after a mile in 1:38.56. Javanica, a Godolphin homebred by Medaglia d’Oro trained by Eoin Harty, was finishing second for the fourth consecutive stakes, beginning with the Glorious Song Stakes at Woodbine last October.

Rombauer received an 84 Beyer Speed Figure, compared to an 85 for his Breeders’ Cup effort. This was not a particular strong field (the only two stakes winners won races restricted to California-breds) but a good stepping stone for Rombauer to prepare for much tougher competition down the road.

The only upcoming weekend Kentucky Derby points race is the Hyacinth Stakes at Tokyo Racecourse that is part of the Japan Road to the Kentucky Derby.