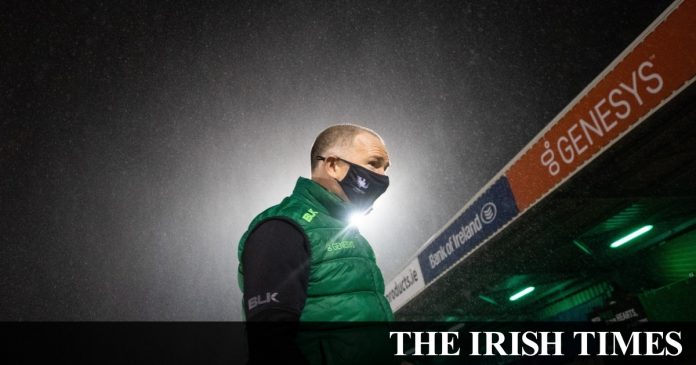 After a week’s break, Connacht return to the Galway Sportsground tomorrow (3pm) for a rescheduled Round 8 cross-conference fixture against Ospreys.

Although sitting in second position on the Pro14 Conference B table, a victory over the visiting Welsh outfit is a requisite if Connacht are to have any hope of catching runaway leaders Munster.

And, with so many unknowns this season, coach Andy Friend’s message continues to be to “just keep playing, try to win as many as we can, because we don’t always know what is going to happen”.

Toby Booth’s Ospreys will arrive with a similar mantra, given they are third in Conference A behind Ulster and Leinster. They are enjoying a renaissance under the former London Irish head coach, and are expected to field a strong side that could boast any of the seven named in the forthcoming Guinness Six Nations campaign .

Friend has every reason to be wary of Ospreys’ back three. Luke Morgan, George North, and Mat Protheroe are Pro14 top performers, matched up front by the likes of Sam Cross, Adam Beard and Justin Tiperic.

And Booth will have watched Munster’s maul do sufficient damage against Connacht two weeks ago – their own maul helping them to score six tries off it this season.

Both sides have struggled for consistency, but the big question for Connacht was whether or not talismanic Bundee Aki, who has been recovering from a knee injury, lined out. After passing a fitness test on Saturday morning he will start from the bench, with Peter Robb slotting into the midfield alongside Tom Daly.

Captain Jarrad Butler starts in the backrow and, although Friend says he has not played much rugby this season, his captaincy and on-field decision making could be needed for this tricky home assignment.

Friend is also expected to give as many players looking for a Six Nations start a last opportunity to impress national coach Andy Farrell, so there is considerable incentive.