That’s the new name given to an Uncle Mo gelding owner Lawrence Roman claimed for $25,000 out of Friday’s first race at Aqueduct racetrack in Ozone Park, N.Y.

Following the race, an outcry ensued on social media that referenced an earlier Tweet from Guillot showing he gave the horse its original name – which can be interpreted as an offensive racial stereotype – in “honor” of a TVG analyst he has since admitted to be Ken Rudulph, who is Black. The Tweet included a emoji of a Black fist.

Guillot falsely claimed on Twitter after the race he named the horse “after my favorite drink when I was a little boy.”

By then, Rudulph had already called Guillot out on Twitter, saying: “The winner in race #1 from Aqueduct is the perfect example of my issue with horse racing. The winning trainer is a disgusting and racist man. But, if you want to make money in this game you have to be able to ignore that stuff. I can’t do it. But y’all carry on with your $11.”

Guillot has posted bigoted or racially tinged comments in the past, including a Tweet in August 2020 saying he had given another horse the name “Uncle Ken’s Cabin,” an obvious reference to the Harriet Beecher Stowe novel about slavery. When asked, Guillot said he didn’t recall the Tweet.

On Saturday morning, The Jockey Club issued the following statement: “The Jockey Club was notified yesterday that the name Grape Soda, which was approved for a 2018 gelding, was potentially offensive. Upon review we have confirmed that the name is ineligible under Rule 6.F.11. of the Principal Rules and Requirements of The American Stud Book, and we have begun the name change process in consultation with the current owner, which must be completed as soon as possible.”

By early afternoon, the horse’s new owner, Roman, told Daily Racing Form‘s David Grening that the name Respect for All had been approved by The Jockey Club and that he will donate 10% of the gelding’s future earnings to the Backstretch Employee Service Team at New York Racing Association tracks. Within hours, the name change was reflected at Equibase, the industry’s official database.

But the ripple effects had just begun.

David O’Rourke, president and CEO of the New York Racing Association, issued the following statement: “Racism is completely unacceptable in all forms. NYRA rejects Eric Guillot’s toxic words and divisive behavior in the strongest terms. At this time, he will no longer be permitted to enter horses at any NYRA track nor will he be allocated stalls on NYRA grounds. In addition, we will review what further steps may be available to us. Our racing community is diverse, and we stand for inclusion.”

Rudulph’s employer, TVG, took its Guillot ban one step further, saying it would not televise any races in which Guillot is participating.

“TVG commends NYRA for taking swift action on the matter involving Eric Guillot,” a company statement said. “There is simply no place in society for racism and we condemn his behavior, a deliberate attempt to slur one of our employees, in the strongest terms. Our network will no longer air races in which he has an entry. We also commend the action by new owner Larry Roman to change the horse’s name. We will continue to work toward making racing more inclusive and to attracting a new generation of fans to the sport.”

The Stronach Group and 1/ST Racing chief operating officer Aidan Butler also said Guillot would not be welcome at the company’s tracks in California, Maryland or Florida.

“1/ST Racing stands firmly against the inexcusable actions of trainer Eric Guillot,” Butler said. “There is no place in the sport of Thoroughbred racing for racism in any form. Our company will not tolerate the use of hateful and divisive language or behavior.

“1/ST Racing agrees fully with the New York Racing Association’s move to ban Mr. Guillot from racing and will take the same action,” added Butler. “Mr. Guillot is no longer welcomed at any 1/ST RACING track.”

Guillot, who only started nine runners in 2020 and 19 the year before that, posted a video on Twitter on Saturday saying that he has now retired from training. Licensed since, 1991, Guillot has won 259 races from 2,348 starts. He’s won 19 graded stakes, the most recent coming in 2016 with Laoban in the G2 Jim Dandy Stakes at Saratoga.

When reached by the Paulick Report, Guillot said the entire matter has been overblown, stating nothing would have happened if the horse had finished second in Friday’s race.

“I didn’t do anything wrong,” said Guillot, who insisted that he is not racist.

When asked why he gave the horse that specific name and said it was “in honor” of TVG’s Rudulph, Guillot said, “I was just teasing him. It wasn’t meant in a harmful way.

“I did nothing wrong but be a common comedian, and my skin’s a little too light to be joking about grape sodas, that’s all,” Guillot said. “If Chris Rock or David Chappelle had said it, it would be OK.”

Guillot went on to blame Rudulph for starting a feud with him, calling him “pompous” and the “most privileged Black person I know. … He plays the 180-degree Black Lives Matter racist card and is as condescending as you get. It has nothing to do with me being racist. This is what he wanted; I just fueled the fire is what I did.” 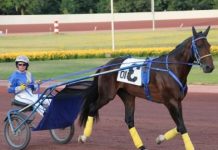 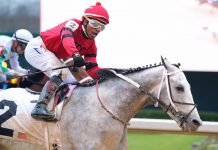 Grade 1 Winner Fighting Mad Retired, To Be Bred To Curlin In 2021