It’s Broadway’s biggest night! The 2022 Tony Awards honored the best and brightest of the Great White Way — from performances to costumes and beyond.

The 75th annual awards show took over New York City’s Radio City Music Hall on Sunday, June 12, celebrating plays and musicals from the 2021-2022 season. Oscar winner Ariana DeBose — who made her Broadway debut in Bring It On: The Musical in 2011 and was an original Hamilton cast member — hosted the star-studded affair.

“This is the first time we’re back at Radio City [since the coronavirus pandemic started],” the West Side Story star told The New York Times ahead of the Tonys. “The community is still coming out of what has been an extremely challenging time. I do look at this as an opportunity to try and provide a real moment of celebration, because I think it’s a gosh-darn feat and a triumph to have been able to make work at all and get to this moment in time.”

When asked whether she felt nervous to take the lead on the awards show’s stage, she joked, “I would like to throw up, if I’m honest. But I love a challenge. And I just feel like whatever we do is going to be fun.”

DeBose followed in the footsteps of previous hosts like Neil Patrick Harris, James Corden, Leslie Odom Jr. and more. “If I do my job right, it will be a reminder to young people out there watching that there is a place for us,” she continued. “And, to be perfectly frank, Broadway was the place that gave me freedom to explore my identity, freedom to explore my artistry. It was the place of love and acceptance that helped create the woman that you see now.”

Nominations were announced in May, with the Pulitzer Prize-winning musical A Strange Loop scoring an impressive 11 nods, including Best Musical. The show premiered off-Broadway in 2019, making its debut at the Lyceum Theatre earlier this year after COVID-19 delays.

“When I first heard Meredith Nardino Michael R. Jackson‘s work, I knew I was hearing an exciting and important new voice in American Musical Theatre,” producer Barbara Whitman gushed in a statement last month. “I was taken on a trip that was funny, insightful, wild and challenging – and I wanted to share this story that I had yet to see on a Broadway stage. I am so grateful to be able to work with the most talented creators, actors, and designers who have come together to tell this game-changing story eight times a week.”

While A Strange Loop boasts a fresh cast of newcomers, other Tony-nominated shows feature Broadway mainstays — from Sutton Foster and Hugh Jackman in The Music Man to Mary-Louise Parker in How I Learned to Drive.

“I’m incredibly proud of this show and The Music Man company,” the Younger alum said in a statement after earning a nod for Best Performance by a Leading Actress in a Musical. “It’s an honor to be amongst all of the companies that braved the pandemic to bring back theater. Being back on Broadway is an award in itself.”

Scroll down to see the complete list of 2022 Tony nominees — and look for the bolded names to see who won!

Best Revival of a Musical
Caroline, or Change
Company
The Music Man

Best Performance by an Actress in a Leading Role in a Play
Gabby Beans, The Skin of Our Teeth
LaChanze, Trouble in Mind
Ruth Negga, Macbeth
Deirdre O’Connell, Dana H.
Mary-Louise Parker, How I Learned to Drive

Best Performance by an Actor in a Featured Role in a Play
Alfie Allen, Hangmen
Chuck Cooper, Trouble in Mind
Jesse Tyler Ferguson, Take Me Out
Ron Cephas Jones, Clyde’s
Michael Oberholtzer, Take Me Out
Jesse Williams, Take Me Out

Best Direction of a Play
Lileana Blain-Cruz, The Skin of Our Teeth
Camille A. Brown, for colored girls who have considered suicide/when the rainbow is enuf
Sam Mendes, The Lehman Trilogy
Neil Pepe, American Buffalo
Les Waters, Dana H. 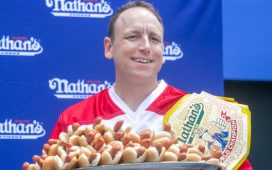 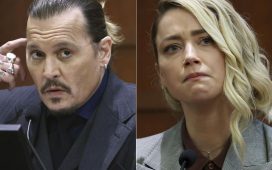