In honor of Redskins legend Darrell Green, here are 28 thoughts and facts about the 0-2 Washington Redskins ahead of Monday night’s home game against the Chicago Bears.

After months of discussion over the next steps with Washington’s holdout left tackle, definitive sides have formed. My guy Grant Paulsen deftly explained the trade now, move on argument. Other voices feel the same. Here are some counterpoints. Two, actually.

2. Let’s start with the disconnect. For many in the public sphere, the perception is Washington’s front office has turned down strong offers including one from the New England Patriots involving a first-round selection. Multiple sources tell The Athletic that offers made were not as robust as previously reported, and the current market for the 31-year-old Williams is quiet.

Washington can only execute a trade if another team wants in. It cannot force a competing…

[SB Nation: Hogs Haven] – Rumor: The Redskins will have a new name in the next 24-48 hours 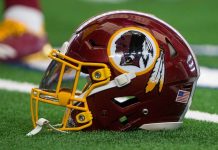 [The Spun] – FedEx Reportedly Sent Private Message To The Redskins