Three women are dancing on an iceberg in the sky. They don’t know how fast it will melt


A feeling of pessimism and despair following the black summer bushfires that swept through Australia in 2019/2020 became the catalyst for one of the most unconventional and ambitious productions likely to be seen during this year’s Sydney festival.

Like most arts organisations, Sydney-based physical theatre company Legs on the Wall has spent the better part of two years in hiatus.

After critically acclaimed seasons of Man with the Iron Neck (tackling the raw subject of suicide among First Nations men) across four major Australian festivals in 2018 and 2019, two national tours of the production came to an abrupt halt in early 2020 due to Covid-19.

Legs on the Wall artistic director Joshua Thomson spent the downtime in introspective and emotional disquiet, struggling to also come to terms with the environmental devastation and national trauma of black summer, which claimed 18.6m hectares of land, destroyed almost 3,000 homes and claimed the lives of at least 34 people.

“I felt moved, hopeless and maybe a bit angry … I just felt like there was nothing I could do to help,” Thomson says.

“Australia is the driest continent on the Earth … and I wanted to put something fragile into that kind of hostile environment.”

Staged across three days in January from Friday, Thomson’s Thaw will see three female artists performing consecutively on a 2.5 tonne block of ice suspended 20 metres above Sydney harbour, in a piece that runs for nine hours each day.

The airborne iceberg melting in Sydney’s midsummer heat, a human figure precariously negotiating its slippery and ever-diminishing surface; a metaphor for the fragile and diminishing natural world melting under the burden of humanity.

Cecily Hardy, Thaw’s creative producer, is the conduit between Thomson’s artistic concept and the logistics of the venture.

It took about 2,700 litres of water to create each of the four icebergs (one was used for rehearsal), with each body of arctic blue-tinted water taking about 10 days to freeze in a custom-made $30,000 steel mould. The freezing process began in November.

A crane positioned on the Sydney Opera House’s western boardwalk will suspend a fresh 2.5 tonne iceberg over the harbour each morning on the 14, 15 and 16 January.

Each day, Isabel Estrella, Vicki Van Hout and Victoria Hunt (the latter two are First Nations artists both over the age of 50) will spend a three-hour shift performing on top of the iceberg.

The choreography has been co-devised by the performers and Thomson, backed by an original score by Alaska composer, sound artist and eco-acoustician Matthew Burtner, who is also the director of Alaska’s environmental arts non-profit organisation, EcoSono.

How long will it take the iceberg to melt each day? That, says Hardy, is the million-dollar question.

Some weather conditions will cause the ice to melt more rapidly than others, possibly dissolving the iceberg by more than 50% over the nine-hour performance time.

“Our testing showed the combination of weather that made the most erosion on the iceberg was wind and sun together,” says Hardy, who fondly refers to her icebergs as “she”.

“Of course the heat melts her, but it’s the wind that makes that surface melt away more quickly. Surprisingly she melts up quite a bit slower than you would imagine when she’s just [exposed to] direct sun on a still day.

“That’s part of the whole point: that some days after a long day, she might look quite different to what she ended up looking like the day before depending on the weather, and that in itself is quite exciting.”

Working on a heritage site that can be visited by thousands of people in a single day has presented a unique set of occupational health and safety challenges, Hardy says.

There were many hurdles that the company – working in tandem with Sydney Opera House management, the crane company, riggers and engineers – had to resolve, which were then independently peer-assessed to ensure maximum safety.

“There’s so many layers of consideration, planning and technology that have gone into what looks like a quite simple and beautiful thing,” Hardy says.

Aside from the opera house forecourt, the three performances of Thaw will be visible from the Cahill Expressway, Circular Quay, the MCA and international passenger terminal, and Lavender Bay, along with myriad other vantage points clustered around the Sydney harbour waterfront.

The performances will also be in full view of Kirribilli House, the secondary official residence of Australia’s prime minister Scott Morrison, who – in the wake of Cop26 – has become internationally infamous for his inaction on climate change.

Thomson says Thaw is undeniably political but not in a didactic sense.

“There’s an opportunity and a responsibility for this work to say something … and yes, it has an element of spectacle,” he says.

“But hopefully, through the spectacle and the scale, we will bring people in, capture the minds of people in their wonder and deliver this message through a moment of thought, not a slap in the face.” 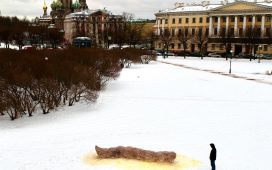 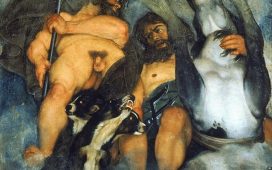