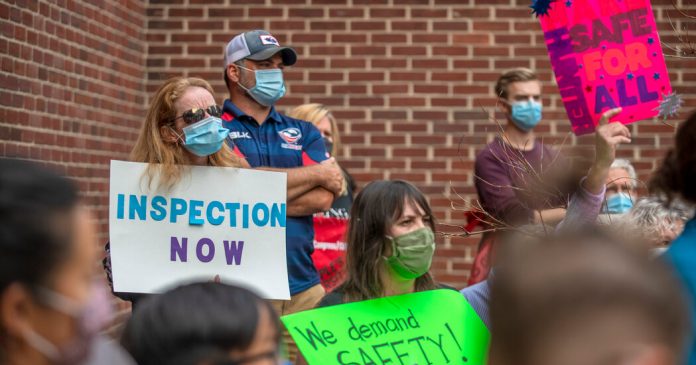 Hunter College High School in Manhattan is one of the nation’s most prestigious high schools, with a famously rigorous curriculum and alumni like Justice Elena Kagan and the Broadway composer Lin-Manuel Miranda. But the elite school is also known for one other thing: its strange, fortresslike building.

The structure on the Upper East Side was designed to look the like armory that was once on its site. Many classrooms have windows so narrow that they only let in slits of sunlight. Some classrooms have no windows at all, which is why students often call it “The Brick Prison.”

In other words, it’s a very problematic place to hold classes during the pandemic.

Before the school reopened last month, teachers were so concerned about the school’s airflow and ventilation that they took school administrators to court and staged a protest. The entire campus, known as Hunter College Campus Schools, serves kindergarten through 12th grade. Well before the pandemic, there were problems with asbestos and black mold in the building.

School officials assured the teachers and worried parents that the school was safe.But on Monday, the family of a kindergartner reported to the school that the child had tested positive for the coronavirus. On Wednesday, Lisa Siegmann, the director of the campus, sent an email to parents saying that two more kindergarten students in the same class had tested positive.

Hunter’s 94th Street campus would be shut down on Thursday for a deep cleaning and the building would reopen on Monday, Ms. Siegmann said in the email.

In a statement to The New York Times on Thursday, the school said, “Out of an abundance of caution, the 94th Street campus has been shut down with classes continuing remotely.”

The anxiety over the building is a striking example of the unforeseen complications that so many schools across New York City and the country are experiencing. Suddenly, a student’s academic success is dependent on Wi-Fi access at home. A tablet or laptop is no longer an accessory; it is a necessity. Now, every window at a school counts.

Barbara Bowen, president of the Professional Staff Congress, which represents the Hunter College teachers, said staff members were concerned about a possible increase in virus cases. “Obviously, a person can contract Covid in any way, and the school can’t control that,” said Ms. Bowen, who is also a professor at the City University of New York. “But they can control transmission.”

New York City’s 1,600 public schools are also navigating myriad challenges. About 100 classrooms and four schools were listed as closed on a city website on Thursday. Those numbers did not include the closings of 169 schools in the state-defined “red” and “orange” zones in neighborhoods where positive cases had been steadily rising.

The schools are receiving guidance, even if frenzied, from Mayor Bill de Blasio and the city’s Department of Education.

But Hunter is the only public school building not controlled by the Education Department; instead, CUNY governs it. Its faculty and staff members have said the safety measures implemented there have fallen short, and teachers held a protest in late September, demanding protections similar to those offered at other New York public schools.

Sympathetic parents began a petition in solidarity. Union members floated the possibility of a strike and took CUNY to court. A New York Supreme Court judge granted a temporary restraining order against CUNY that barred teachers from working in classrooms that did not have air filters that could block over 99 percent of particles like dust, mold and bacteria.

Ms. Bowen said teachers and some parents and students remained worried about their health because the building had already been flagged several times. “The building has a compromised ventilation system even before Covid,” she said.

In the spring of 2019, workers had found asbestos in the school’s basement during a boiler renovation, which resulted in the relocation of two kindergarten classes. And before the school shut down this past spring, black mold was discovered during an HVAC renovation.

Teachers and students reported suffering from irritated eyes and throats, cough and strange odors from vents. “My son has always had sinus issues, and got sinus infections for the first time of his life when he started school,” said Juliana Sohn, the parent of a ninth grader and a 12th grader. “They only happened during school, so I always thought there was some air quality issue.”

But as the school prepared to reopen, the filters being placed in the HVAC did not meet the level of air filtration that the Centers for Disease Control and Prevention recommend, some teachers said.

The latest on how schools are reopening amid the pandemic.

Correct filters were installed after the teachers filed the restraining order, though school administrators attributed the delay to the high demand for the filters and a low supply of them.

Danny Mozes, an English teacher, said the difference between the two sets of filters was significant. “It’s like a colander versus a cheesecloth,” Mr. Mozes said.

Ms. Sohn and Meika Mustrungi, both parents of 12th graders, started a parent petition in support of the teachers. According to Ms. Sohn, parents were not informed that teachers were worried about the reopening plan, as teachers had no access to their contact information.

Ms. Sohn has said that the only channels for information are Zoom meetings, and that emails to the administration and the parent-teacher association, which has expressed a desire to remain impartial, have largely gone unanswered. She started a Slack channel for parents frustrated by the school’s poor communication.

The P.T.A. did not return a request for comment.

The fight over the filters and other safety measures stretched nearly two months before CUNY and the teachers’ union agreed to an independent inspection of the ventilation system. The inspection cleared the school for reopening. “They corroborated what we have been saying all along: That the school is ready and safe for occupancy,” the school said in a statement.

But since the school first welcomed back students this fall, a WhatsApp chat of elementary schoolteachers, shared with The New York Times, has been filled with claims of disorganization and confusion: Hand-sanitizer stations have been unfilled. Tents where students eat lunch have not been cleaned. Teachers are missing equipment, like laptops to allow them to teach remote learners. Cleaning staff members asked teachers if they could use their personal sanitizing products.

One teacher had a student who complained that she was having trouble breathing and that her sister was home with a fever. The nurse wasn’t sure what the protocol was, so she sent the student back to the classroom.

“Kids don’t keep their masks on at all they are always moving it all over the place,” a teacher’s message read. “Touching their soaked through masks all day.”

“One of my pod kids kept trying to touch my hand and hold it,” another teacher said in the chat. “One kid took off his mask and started to eat in the classroom.”

On Thursday, Mr. Mozes said school administrators had failed to properly keep students in pods. He said in an email that elementary school children played together at recess and ate together at lunch, regardless of pods.

“This is apart from kids within pods picking one another’s noses,” he said. 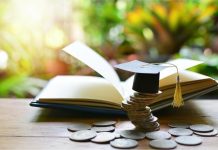 Headteacher who healed a Birmingham 'Trojan horse' school: 'We did it with love'

'It's had a lasting impact': students on being bullied over their accents 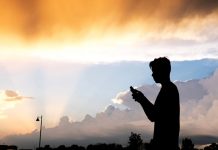 To Recognize Misinformation in Media, Teach a Generation While It’s Young

Councils back Rashford and pledge to provide school meals over holidays

Free school meals campaign takes off in England – in pictures