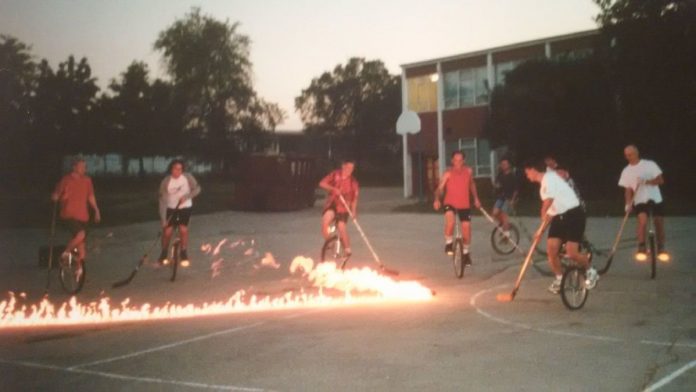 It was a warm summer day when I arrived at an elementary school in northern Toronto, unsure of what I was getting myself into. I walked through various empty parking lots looking for someone I had never met before.

I had seen plenty of obscure hockey games in my life, but this was going to be something totally unique. Eventually, I found what I was looking for: two small nets the size of shoeboxes. A bundle of street-hockey sticks were wrapped up in the middle. A smiling man was unpacking his gear from the back of a hearse that was adorned with a license plate reading “UNICYCLE.” Finally, I was about to achieve a goal that I had pursued for many years: I was going to witness a game of unicycle hockey.

To me, it was a novelty, but to that smiling man, it was a passion, one shared by people around the world. Darren Bedford, a stage performer with a unicycle shop in Toronto, helped found the Toronto Unicycle Club, the city’s longest-standing unicycle club, in 1987. An eccentric character with a true love for his pastime, he organized a special game during the club’s “off-season” to give me and Bradshaw Furlong, a former The Hockey News intern, a first-hand look at what unicycle hockey was all about.

Before you ask: yes, it was totally worth it.

The idea of playing hockey on a unicycle is rather hilarious. Skating on two legs is tough enough. Trying to remain balanced on a single wheel? That adds a whole new layer of difficulty. Unicycle hockey isn’t pretty: it can be slow, sloppy and discombobulated, but at a level that makes it amusing and addicting to watch. What started out as a small gathering in a school parking lot resulted in 20 or so bystanders moving closer and closer to get a glimpse of such a bizarre sport, many for the first time.

But as he would find out – slowly, of course, because this was in the days before the internet the Toronto Unicycle Club wasn’t the first to play the sport. In 1925, the silent film Variety showcased two people on unicycles pushing around a balled-up towel, with one of the performers holding a field hockey stick. In 1960, an article in Bicycle Journal quoted a member of the Albuquerque Unicycle Club as playing the sport, with it often sourced as the first real unicycle hockey club in the world. In 1976, the Wheel People, one of the most famous unicycle groups, began playing the sport in California, and it started gaining traction in Europe during the 1980s.

In 1994, the sport gained legitimacy in the unicycle world by being included in the biennial World Unicycling Championships, known as Unicon, for the first time. Germany’s main team won the first tournament, beating out a second German team for the gold. The three biggest leagues take place in Australia, Germany and Switzerland, with the Swiss taking gold in the top division of the 2018 Unicon championship in South Korea. As many as 16 countries have active unicycle hockey clubs, an impressive number given the unique skill set needed to even attempt it.

But you’d be surprised how few people fall off their unicycles during a game, even at the more recreational levels. While the sport is still a form of hockey at its roots, there are some notable differences – in case the concept of playing hockey while balancing on a wheel wasn’t clear enough. The court size is much smaller than your average rink, with many clubs just playing in school gyms. There isn’t a dedicated goalie, and even the high-level leagues feature co-ed options to include as many players as possible. Oh, and some groups choose to set the puck on fire, because…why not?

“I came up with, ‘Wow, what if we dipped this in fluid? And instead of, like, juggling fire, we play hockey with it?’ And I’ll tell you, it became worldwide.” Bedford’s club is more about the members enjoying the game than building toward a goal of playing in the world championship – the group’s motto is “having fun on one wheel,” after all.

On any given night during the school year, the club attracts about 30 participants and, if they’re playing outside, at least another 30 were amazed at what they’re seeing. Some original club members still show up every now and then, even bringing their kids along for the fun. The age range runs from kids in their early teens to older adults in their 60s.

There are a few other unicycle sports that groups take part in, such as soccer, basketball and football. Bedford’s group in particular even dabbles in sumo wrestling. “There’s a circle that’s on the floor in the gym, probably about a 10-foot diameter circle,” Bedford said.

“You have one person start on each side, and then the unicyclists ride in and they wrestle each other. The first one to either touch the ground with a foot or have a wheel go outside the circle is the loser.”

And while playing on a unicycle might seem worthy of the award for the strangest variation of hockey, it’s far from the craziest deviation of the sport. Underwater hockey has existed since the 1950s, with world championship events being held since 1980. Participants wear diving masks, snorkels and fins and use short sticks to essentially push a lead puck into a 10-foot-wide net. The 18th world championship, which took place in Hungary in 2013, had the largest participation ever, with 19 countries battling it out among the many different age groups.

Like unicycle hockey, the underwater version consists of two teams of 12 players each, with six players active at a time, playing two 15-minute periods. The positions typically feature three forwards (a striker and two wingers) and three backs (two halfbacks and a fullback). As is the case with ice hockey, possession matters greatly, with the winning teams often displaying more speed and taking advantage of every bit of real estate they can get.

The biggest question that underwater hockey players get asked? How do the players breathe?

“When you go down and you’re in the play and you’re handling the puck and doing stuff, you’re exerting a lot of energy,” said Jeff French, a member of the group that plays in Toronto each week. “So you’re actually going down for 10, 15, 20 seconds at a time. The whole goal is to minimize your recovery time.”

Not to be outdone, there have been games played in Europe in which the action takes place not simply underwater, but also upside down under ice. It’s like playing regular ice hockey with full-length sticks, but you’re upside down, and you’re beneath the ice instead of on top of it. Why? Well, who knows, but the YouTube clips are certainly entertaining.

We’re still waiting on an under water flaming ice unicycle variant, but, alas, we can only hope.

Hockey has been played in many forms and, in reality, the version we’ve come to love isn’t the original. The oldest variation of hockey, but one that’s often overlooked in North America, is bandy. It is believed to have been created in England during the late 1800s, and the sport quickly grew in Europe and is now played in countries all over the world. The game is structured more like a soccer match, consisting of two 45-minute halves, with each team using 10 skaters and a goalie. Both the ball and the net are much bigger than in hockey, and a normal bandy playing surface is about the size of a soccer pitch.

Bandy has never taken off in North America, with teams from Sweden, Russia and Finland typically dominating the scene. And even though they don’t have any traditional ice hockey teams, Somalia and Afghanistan have bandy squads, although Afghanistan can only compete in friendlies as it is not a member of the Federation of International Bandy. Be sure to look up matches on YouTube. It’s an incredibly skilled sport and a treat to watch. The outdoor games, in particular, look absolutely beautiful.

While bandy is popular, there isn’t any money to be made in most unusual versions of hockey, which puts the spotlight instead on the main reason why most people take up ice hockey in the first place: for the love of the game, even if it means completely changing it for no reason other than to just have fun.

And what Bedford and his team of unicyclists showed us that one night is that hockey can truly bring joy, no matter its incarnation and how weird it may look. 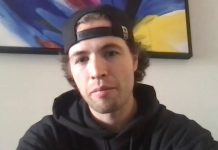 Maple Leafs' Ben Hutton: This Year I Haven't Produced As Much Points As I'd Like To 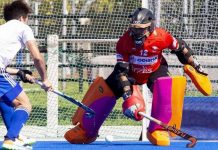 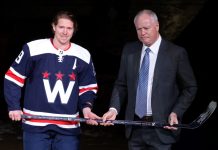 That's 1,000 Games for Nicklas Backstrom. Next up: the Hall of Fame 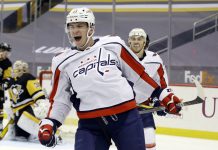 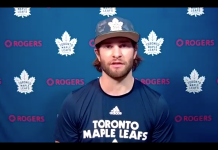 Maple Leafs' Jack Campbell: Giving Up Three In The First Is Unacceptable 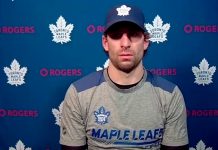 Maple Leafs' John Tavares on Power Play: 'I Got To Do A Better Job, It Starts With Me" 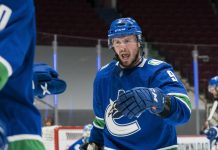 J.T. Miller Shows Courage On and Off the Ice for the Canucks 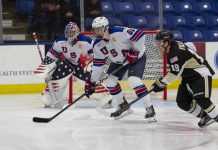 Can Team USA Get Back to Gold? 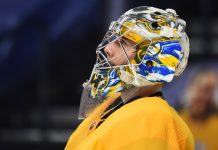 Juuse Saros' Hot Play is Bearing the Fruit of Patience 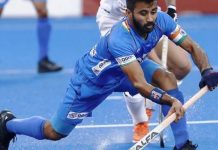 Our task is not over until we stand on the podium in Tokyo: Manpreet 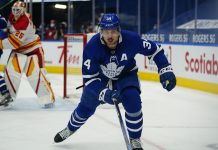 Maple Leafs' Auston Matthews Out 'Day-To-Day' With Injury, Will Miss Game Against Jets 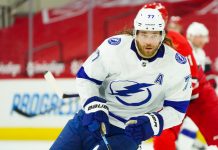 Q&A With Victor Hedman: On Peaking in his 30s, Chasing a Stanley Cup Repeat and More