The Knothole: On return to my childhood muni, I discovered its hidden identity

ROSLYN, N.Y. — There’s a golf course a few miles from my house. His name is Christopher Morley.

Chris resides in the rich part of town: Long Island’s “North Shore,” the same old-money enclave that inspired West Egg in F. Scott Fitzgerald’s “The Great Gatsby.” Celebrities, magnates and heads-of-state live opulently within a few miles of his rusted front gates. The nearest landmark is a super-luxe “shopping village” fittingly named The Americana, the sort of place where the success of retail therapy can be measured in the thud of premium credit cards against Italian marble.

But Chris isn’t like his neighbors. He is delightfully, perhaps even combatively unpretentious. A mangled chainlink fence separates him from the outside world. The cement pathway leading to his front door is cracked and caulked over. His decor remains uniquely 70s — and not intentionally nor ironically — and his bathrooms have hardly been cleaned since then, never mind updated.

For years, his property has been caked in green goose pellets, the kind that stick to the bottom of your shoes and leave behind a scent of grass and, well, you can imagine it. Still, the prodigious efforts of the native bird population have done little to fertilize the soil. In the summer months, the few fairways that survive the scorching heat turn a ghastly brown hue. The greens are both oversaturated and overgrown to avoid the same fate, resulting in a putting surface that rolls like shag carpet.

For years I called Chris a dog track. But he was my dog track. The place where I played my first round, where I first scribbled numbers into a scorecard, where I first learned that I loved (and hated) golf. Like a proud little brother, I love Chris, and I’m all too willing to overlook his misgivings.

My dad took me to visit Chris for the first time when I was 7. I’d just been gifted my first starter set of clubs for my birthday and this was as much golf course as I could handle. We arrived early on a hot summer morning and set off, 9 holes and 1,603 yards ahead of us.

We played three holes before I threw a temper tantrum. While Dad could send his ball arcing between the trees and up to the putting surface, I could hardly get mine off the tee. When I did make contact, I played a slice that traveled further left than it did straight. Dad, sensing we were falling behind an (already glacial) pace, poured gasoline on the problem by scolding my behavior. I responded by crying, behavior that subsided only when Dad threatened to drag us both home early.

I sulked all the way to the 8th hole, where the forces of physics and karma took leave just long enough for something miraculous to happen: my first great shot.

The 97-yard hole called for an almighty lash at a 5-iron with every ounce of effort from my tiny body. I followed Dad’s advice and kept my head down, swinging as hard as I could.

Truthfully, I never saw the ball. I only heard the reaction from Dad when it shot up in the air.

The ball came to rest near the green, and I ran up ahead of him to find it glistening in the short grass just a few short feet from the flagstick. I yelled back to Dad.

I didn’t know it then, but I was hooked.

As I grew older, my visits to Chris grew fewer. There were bigger golf courses to play, other fearsome tests to tempt. I never mastered Chris, but I outgrew him. My tolerance for his well-loved features grew thin.

Chris wasn’t too bothered. This, I would come to learn, is his legacy among so many Long Island golfers. For as long as there were people hoping to learn the sport, Chris was there to teach them. And for as long as he taught those people properly, they would soon leave for better courses. His success was measured not in how many golfers returned, but in how many didn’t.

Still, some people returned anyway. Some people like me.

It was just after Christmas and the weather was unseasonably warm — perfect for stealing the rarity of a few unbothered hours on a Long Island public course. I walked through the gates in a light jacket and peered around.  The course was precisely how I’d left it more than a decade earlier, right down to the solo-cup molded tee markers.

“This is unbelievable,” I muttered to no one in particular.

My playing partners — my girlfriend Jamie and her father — were running late, so I snuck off for a quick walk around the property, which doubles as a lovely 200-acre public park. I hadn’t made it more than 100 yards from the parking lot when it first saw it, ironically, just past an actual dog park.

It was a tiny wooden hut, hidden off the trees, with a plaque in front. At the top of the plaque, in bold letters, were two words: “THE KNOTHOLE.” I walked up to the plaque and read it.

“Built in 1934 by the popular author Christopher Morley (1890-1957) as a retreat where he could work undisturbed by his growing family,” the plaque read. “Originally located next to Morley’s home in Roslyn Estates, The Knothole was moved to the park in 1966 and restored by his admirers as a memorial to the prominent writer.”

I walked up to the entrance and peered through the window. There was a desk and a fireplace. There were bookshelves filled with novels. Up above the front door, there was a phrase ensconced in Latin. It didn’t take long to realize I was staring into a perfect writer’s nook — one that formerly belonged to the man himself, Christopher Morley.

I took a step back and laughed out loud, letting the irony wash over me. I’d known Chris but, as it turns out, not Christopher Morley. As it turned out, he’d had a life of his own; a life that sounded a little like one I dream of.

I wandered back to the first tee just as my playing partners arrived. Jamie was filled with nervous energy. She’d invited herself to golf, her first-ever round of golf, after hearing about the forecast over the holiday. Quickly, her dad and I chose Chris as the destination of choice.

“I’m not going to make any promises,” she’d said just before placing her tee into the ground. “I just want to have fun.”

Within a few minutes, she’d easily cleared that bar, sticking her approach on the first hole to 8 feet and narrowly missing a spectacular sand save on the third.

We continued like this for another 90 minutes, laughing and bunting our way around Chris. As we walked off one green, Jamie’s dad extended his hand.

This, it seems, is Christopher Morley’s one universal experience: it is what you make of it. For the smart ones, there are no expectations. Only golf and fun.

It seems even Chris knew that. As I walked back to my car, I found myself thinking again about The Knothole — about the great American writer, passionate outdoorsman, and defender of public works I’d never known existed.

Before I pulled away, I searched the Latin quote inscribed above his front door. It comes from the philosopher Erasmus.

“How busy you are in your library, which is your paradise.”

Maybe Christopher Morley would be disappointed to know his golf legacy. Or maybe it was precisely the point.

James Colgan is an assistant editor at GOLF, contributing stories for the website and magazine. He writes the Hot Mic, GOLF’s weekly media column, and utilizes his broadcast experience across the brand’s social media and video platforms. A 2019 graduate of Syracuse University, James — and evidently, his golf game — is still defrosting from four years in the snow. Prior to joining GOLF, James was a caddie scholarship recipient (and astute looper) on Long Island, where he is from. He can be reached at james.colgan@golf.com. 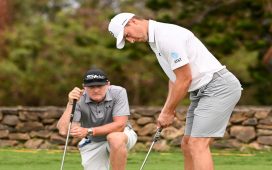 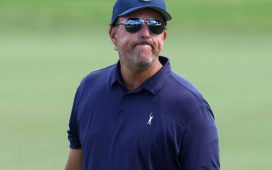 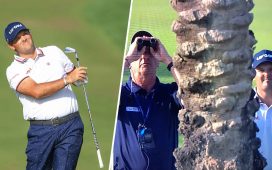 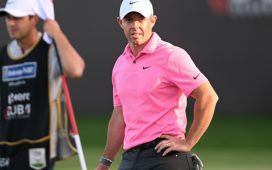