There were some anxious moments throughout the running of Sunday’s $100,000 Busanda for The Grass Is Blue, but the daughter of Broken Vow proved superior in the nine-furlong event for sophomore fillies at Aqueduct Racetrack in Ozone Park, N.Y.

Owned by Louis Lazzinnaro and trained by Chad Brown, The Grass Is Blue received a well-timed ride by jockey Manny Franco, who piloted the filly to a one-length triumph in her second start around two turns and first with blinkers.

The Grass Is Blue garnered ten points on the Road to the Kentucky Oaks when taking the Busanda – a 10-4-2-1 qualifier for the prestigious event. The Grass Is Blue arrived at the Busanda off a close third as the favorite in Laurel Park’s Anne Arundel County on December 26.

Breaking from the outside post in the five-horse field, Franco angled The Grass Is Blue to the inside approaching the first turn while Traffic Lane assumed command with fellow Todd Pletcher-trained Repole Stable color bearer Coffee Bar close behind in second through an opening quarter-mile in 24.44 seconds. Franco had a tight hold on The Grass Is Blue, who was rank as the field approached the backstretch.

With the half in 49.73, Traffic Lane was maintained command as The Grass Is Blue was still in search of racing room along the fence with Wonderwall and Diamond Ore inching closer to the front.

As Coffee Bar inched her way to even terms with her stable mate at the top of the stretch, Franco weaved The Grass Is Blue two paths to the outside and in the clear and gave the filly her cue at the three-sixteenths. Coffee Bar proved to be a tough customer and battled gamely to the inside, but the 8-5 favorite proved best, completing the 1 1/8 miles in a final time of 1:54.90 on the fast main track.

The New York-bred Coffee Bar, a Repole Stable homebred, finished another five lengths ahead of Diamond Ore, who rounded out the trifecta. Traffic Lane and Wonderwall completed the order of finish.

Franco expressed confidence in his filly and said the equipment change made a big difference.

“I knew I had a lot of horse under me the whole way around,” said Franco, who piloted Always Shopping to a win in the 2019 Busanda.“The blinkers helped a lot. I was just waiting for the right moment to make my move and at the quarter pole, she just accelerated. With the blinkers first time, I knew she was going to take me there. I just wanted to give her a breather at some point during the race and that’s why I stayed inside. When the time came, I tipped out and she just accelerated. She got the distance really well.”

Lazzinnaro was full of praise for Franco for a confident and patient ride aboard his filly.

“I think Manny gave the horse a perfect trip,” Lazzinnaro said. “It looked like she liked the track a lot so we’ll probably keep her here during the winter and let Chad figure out what to do and how to go about winning another race with her. Chad took his time with her and got her going good. The distance was good for her today.”

Bred in Kentucky by Phillips Racing Partnership, The Grass Is Blue is out of the Aldebaran mare Shine Softly, whose mother Soaring Softly won the 1999 Breeders’ Cup Filly and Mare Turf and was named Champion Turf Mare that same year.

Why Does It Cost So Much To Board Your Horse? One Farm Owner Breaks Down Her Budget 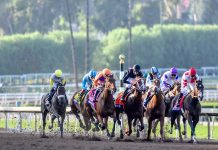 Cavallini obliges in the main event

Fonner Files: A Tip Of The Hat To Stetson

Anchored By Fountain Of Youth, Saturday’s Rainbow 6 Pool Guaranteed At $700,000

Is Florida Clenbuterol Positive An Open Or Shut Case?