The squirrels in the Northeast are frenzied as the mature acorns come showering down and the first wave of leaves are off the trees.

Fall is just around the corner, as any racing fan can attest. The prime-time summer meets of Saratoga and Del Mar are receding in our collective rear-view mirrors, and the Breeders’ Cup, the season’s finale looms less than eight weeks away.

Time to break out the sweaters for the autumn racing that kicks off this weekend as Churchill Downs returns on Wednesday and Belmont Park resumes Thursday.

Both tracks have stakes-laden cards planned for Saturday.

The Iroquois (G3) and the Pocahontas (G3) for fillies are dual qualifiers at Churchill Downs. The pair of stakes for 2-year-olds are Breeders’ Cup “Win and You’re In” races, assuring the winners a starting spot in the season-ending championships. 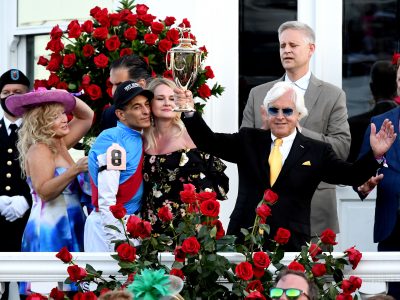 The dual qualifications stem from the fact both are also the first races on the Road to the 2022 Kentucky Derby. The winners each earn 10 qualifying points toward either the Derby or the Kentucky Oaks (G1).

With so much on the line, the race attracted nominations from many major trainers with one notable exception: Bob Baffert.

The same applies to the Kentucky Oaks. Sorry Bob, you’re out.

The Iroquois nominees include Double Thunder, fresh from winning the Sapling at Monmouth Park for Todd Pletcher; Kevin’s Folly, third behind Gunite in the Hopeful (G1) at Saratoga and the trio of Roger McQueen, Lucky Boss and Costa Terra, the 1-2-3 finishers in the Juvenile Stakes at Ellis Park.

A sweater and a jacket might be in order north of the border for the busy weekend that features four Grade 1 turf stakes: the Woodbine Mile and Canadian International on Saturday and the Natalma and Summer Stakes on Sunday

Jockeys and Jeans remembers 9/11 during fundraiser at Monmouth Park

Saturday was a time of somber reflection in the greater New York area. The pain and the wounds of the 9/11 attack are still too raw, too real.

Saturday was also “Jockeys and Jeans” Day at Monmouth Park, the fundraiser for the Permanently Disabled Jockeys Fund. The sellout crowd in the Turf Terrace observed a moment of silence as a pair of first responders recalled those slain 20 years ago.

Then it was time to honor racing’s fallen heroes, the victims of crippling injuries in this very dangerous sport.

“I had my share of trials and tribulations with spinal injuries during my career,” said Richard Migliore, the master of ceremonies and auctioneer for a wide array of racing memorabilia.

A large contingent of Hall of Fame riders attended in person, a heart-warming show of support for their colleagues. It’s not every day you gather Pat Day, Laffit Pincay, Jr., Chris McCarron, Sandy Hawley, Ramon Dominguez, Braulio Baeza, Jose Santos, Jorge Velasquez, Earlie Fires and quarter horse racing’s G. R. Carter in one place.  Add in Julie Krone, the first female rider inducted and the former queen of Monmouth, and you have a dynamite lineup.

They were the fortunate ones who walked away at the end of their careers.

After the Hall of Famers were introduced came the most moving moment, the roll call of riders in the room in their wheelchairs: Roger Blanco, Mike Straight, Anne Von Rosen, Jo Hayes. Armando Rivera, Dennis Collins and Linda Hughes. The appearance by Sidney Underwood hit close to home. She was injured in 1992 when her mount went down at Atlantic City Race Course.

If “Jockeys and Jeans” comes to a racetrack near you, try to attend. It’s a fine cause as the funds, desperately needed in many situations, go directly to the disabled riders. You’ll do a good deed and spend quality time with some extraordinary people.

The Jockey Club report on the 2022 foal crop told another sad tale. The number of horses being bred continues to decline, a troubling trend that impacts the health of the industry.

We hear about “supply chain” disruptions, the reason why your local Home Depot has no refrigerators to sell. Those shortages will presumably ease in the future.

There is no easy solution to the foal-crop decline, racing’s supply chain problem. If fewer horses are born, then fewer races can be carded, those offered will have fewer runners, more tracks will cancel cards for lack of entries and the sport will contract even more at a time when the competition, especially legal sports betting, intensifies.

There are no easy, or quick, answers. Breeding horses is expensive, with no guarantees of return on investment. It’s also time consuming, a multi-year process from the time a breeder commits a mare to a stallion until that offspring possibly makes it to the races.

The odds against success are long, apparently too long for many past or potential future breeders.

As fans of the sport, the shortages will show up in shorter meets and fewer race days. It’s an elemental principle of economics: a business not growing is dying.

Dreamalildreamofu Gets Second Career Stakes Win In Twixt At Laurel