Donald G. Sullivan was lying in bed one night, early in his career as a scientist, when he realized his data might hold a startling secret.

For his master’s research at the University of California, Berkeley, he had sampled the sediment beneath a remote Sierra lake and was hoping to study the history of vegetation in the area. But a lot of the pollen in his sediment cores didn’t seem to be from nearby. How had it gotten there?

When he X-rayed the cores, he found layers where the sediment was denser. Maybe, he surmised, these layers were filled with sand and silt that had washed in during floods.

It was only late that night that he tried to estimate the ages of the layers. They lined up neatly with other records of West Coast megafloods.

“That’s when it clicked,” said Dr. Sullivan, who is now at the University of Denver.

His findings, from 1982, showed that major floods hadn’t been exceptionally rare occurrences in the Sacramento Valley over the past eight centuries. They took place every 100 to 200 years. And in the decades since, advancements in modeling have helped scientists evaluate how quickly the risks are rising because of climate change.

For their new study, which was published in the journal Science Advances, Dr. Huang and Dr. Swain replayed portions of the 20th and 21st centuries using 40 simulations of the global climate. Extreme weather events, by definition, don’t occur very often. So by using computer models to create realistic alternate histories of the past, present and future climate, scientists can study a longer record of events than the real world offers.

Dr. Swain and Dr. Huang looked at all the monthlong California storms that took place during two time segments in the simulations, one in the recent past and the other in a future with high global warming, and chose one of the most intense events from each period. They then used a weather model to produce detailed play-by-plays of where and when the storms dump their water.

Those details matter. There are “so many different factors” that make an atmospheric river deadly or benign, Dr. Huang said.

Xingying Huang of the National Center for Atmospheric Research in Boulder, Colo.

Wes Monier, a hydrologist, with a 1997 photo of water rushing through the New Don Pedro Reservoir spillway.

In the high Sierras, for example, atmospheric rivers today largely bring snow. But higher temperatures are shifting the balance toward rain. Some of this rain can fall on snowpack that accumulated earlier, melting it and sending even more water toward towns and cities below.

Climate change might be affecting atmospheric rivers in other ways, too, said F. Martin Ralph of the Scripps Institution of Oceanography at the University of California, San Diego. How strong their winds are, for instance. Or how long they last: Some storms stall, barraging an area for days on end, while others blow through quickly.

Scientists are also working to improve atmospheric river forecasts, which is no easy task as the West experiences increasingly sharp shifts from very dry conditions to very wet and back again. In October, strong storms broke records in Sacramento and other places. Yet this January through March was the driest in the Sierra Nevada in more than a century.

“My scientific gut says there’s change happening,” Dr. Ralph said. “And we just haven’t quite pinned down how to detect it adequately.”

Better forecasting is already helping California run some of its reservoirs more efficiently, a crucial step toward coping with wetter wet years and drier dry ones.

On the last day of 2016, Wes Monier was looking at forecasts on his iPad and getting a sinking feeling.

Mr. Monier is chief hydrologist for the Turlock Irrigation District, which operates the New Don Pedro Reservoir near Modesto. The Tuolumne River, where the Don Pedro sits, was coming out of its driest four years in a millennium. Now, some terrifying rainfall projections were rolling in.

If Mr. Monier started releasing Don Pedro’s water too quickly, homes and farms downstream would flood. Release too much and he would be accused of squandering water that would be precious come summer.

But the forecasts helped him time his flood releases precisely enough that, after weeks of rain, the water in the dam ended up just shy of capacity. Barely a drop was wasted, although some orchards were flooded, and growers took a financial hit.

The next storm might be even bigger, though. And even the best data and forecasts might not allow Mr. Monier to stop it from causing destruction. “There’s a point there where I can’t do anything,” he said. 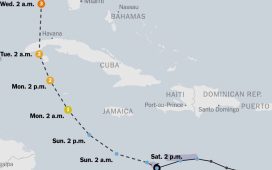 How to Exercise Safely Outside in the Fall and Winter 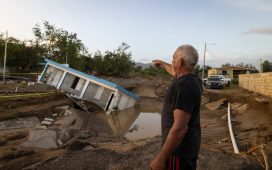 11 million at flood risk and 301 wildfires: Climate hazards in the US today 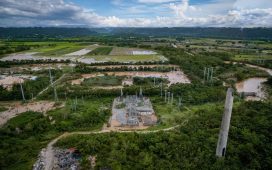 20 million at flood risk and 313 wildfires: Climate hazards in the US today

‘Catastrophic’ Hurricane Fiona and 301 wildfires: Climate hazards in the US today