This is the second installment in our monthly column from editor-in-chief Natalie Voss following her journey with her 2021 Thoroughbred Makeover hopeful Underscore, fondly known as Blueberry. Read the first in this series here and learn Blueberry’s origin story and the author’s long-running bond with this gelding and his family here. You can find Blueberry’s Facebook page here.

I spent a lot of time this winter staring at my new OTTB grazing in the field with a furrowed brow, trying to decide how I felt about his appearance. (Fortunately, Blueberry is the type of horse who easily tunes out distractions and grew used to me squinting at him with my head tilted to one side.) I can never decide if he’s just a hair lighter than I want him to be or if the only real problem is that I’m too used to looking at my draft cross mare.

He has been easier to keep weight on than I would have guessed when I got him in late November, and he kept his slick coat and topline until just about January. In February, we got several rounds of ice, snow, and frigid temperatures and whatever muscle he had at the track evaporated as he was outside 24/7 and not yet under saddle. He was never thin exactly; just, as I kept telling my husband, “ratty.” He grew a scraggly, thin winter coat which also added to his somewhat bedraggled aura. We’d pulled his shoes in an effort to toughen his soles, and every time he’d take a short step over the driveway after a trim, I’d flinch even though he’d walk, trot and gallop around his paddock soundly.

Still, he was happy enough, bright-eyed, ate and drank plenty, and plodded along for our walks up and down the hilly paddock lanes. I knew, logically, he was healthy and doing well for a horse who had gone from the track to turnout at the start of a Kentucky winter. What I discovered during this period though, was that I was uncomfortable with the “ugly duckling” phase. 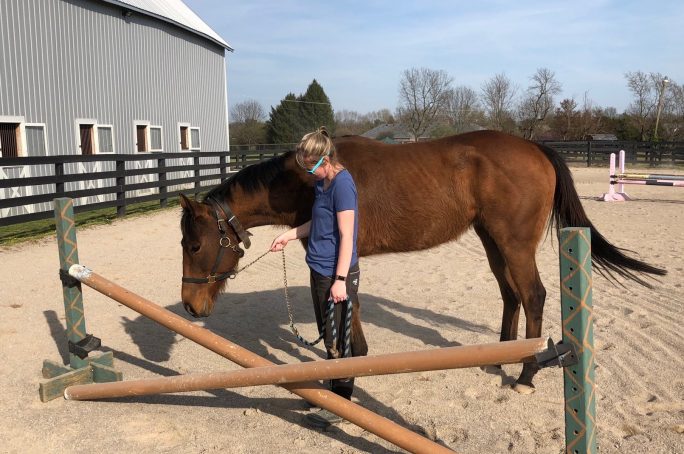 Blueberry encounters a crossrail on his first day at the new farm, early April

I am fortunate to have an OTTB expert in our trainer, Stephanie Calendrillo. She trains and resells off-track horses and will be headed to her third Thoroughbred Makeover this year with eventing star Dispatcher. Most of her clients’ horses are also OTTBs, so she’s used to managing the transition from track to arena. Don’t worry about this, she told me. It’s normal for a horse’s body to change when he goes from track to pasture, but it’ll change again when he begins under-saddle work, and it’ll happen so quickly it will surprise you.

A lot of my writing on the Paulick Report is in our Horse Care section, where we try to educate readers about veterinary and management topics. Often, time is a key component to healing an injury, managing a chronic condition, or improving a horse’s fitness. The unspoken aspect of this of course is that a horse isn’t going to look perfect every day of their lives. As long as you’re making progress toward your goal and are using good, expert guidance you’re doing the right thing, but an ugly duckling phase is unavoidable. Until I had Blueberry, I hadn’t thought about that before. My draft mare was quite a challenge in her early days, but her issues were more behavioral than they ever were aesthetic because she has feet like hickory, is impervious to foolish outside influences like pathogens, and gets fat on air. I spend more time trying to get weight off her than on, and while she’s always been round, no one has ever worried about whether she was being looked after. All I could think, looking at Blueberry’s somewhat hollowed-out neck in March was, ‘If I saw that horse, I’d wonder a little bit about what was going on there.’

After we moved him to Stephanie’s main facility in April and began more intensive ground and under-saddle work, we were surprised at how quickly he became stronger, how fast he built up fitness at the trot and later, the canter. We added protein and rice bran oil to his diet to help him keep up with his new workload and improve his coat and skin. When he didn’t shed his winter coat (even in late April) I finally had him clipped about two weeks into his new workout plan and lo, there was a slight topline there. We added front shoes, and when he’d still have the odd tender day, we added pads and his feet are growing quick and strong. 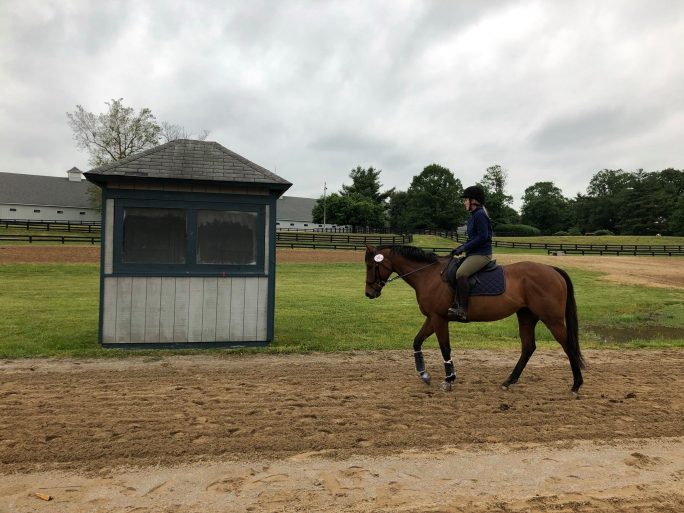 Blueberry in late May, under saddle during a schooling session at the Kentucky Horse Park

Then the spring rains came, and with them, some rain rot. I tried a little of this and that, over-the-counter lotions and soaps mainly. Then there were the hives, tiny little ones that didn’t seem to itch or hurt, but which blanketed his neck and shoulders, then his back, then his rump and legs. We tried corticosteroids and antihistamines and the hives gave way to little crusty bumps like rain rot from hell. I tried new over-the-counter lotions, and it didn’t seem to yield. He looked a mess, but at least a reasonably athletic mess. At last, we found the solution – baby oil to soften the scabs, which are now nearly gone, and a diluted alcohol solution on healed areas where water from baths and thunderstorms will drip, encouraging bacteria to fester (down the legs, down the rump and sides). A slick summer coat is growing in, a shiny, brilliant reddish brown – a tribute to his mother.

Even though he’s improving now, I know this is a step on the journey. Stephanie tells me that OTTBs often spend a full year sometimes adjusting to new diets, routines, pasture compositions, weather, working different muscles from what they did on the track. It’s not that they aren’t healthy or functional during that time, just that they’re going to change. He’s starting to fill out into the horse I hoped I’d have one day, but I know these journeys aren’t always linear. He may encounter some new need or struggle at some stage, and I now feel I can treat it as a learning process – and remember to be patient with us both.

Kanderel Gets Second Win In Row In Siren Lure

Delgado Has Visions of Breeders’ Cup For The Critical Way

A Record Rainbow 6 Jackpot Up For Grabs At Pimlico