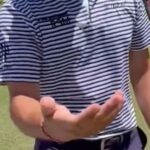 “You got to do it again,” Tony Finau said.

We’ll start with that second quote first. By now, dear golf reader, you probably have seen everything. You know your golf, and you know your golf shenanigans. You saw the headline above, saw the word “trick” and thought, you know, I’ll give this one a go, but I’m ready to be triggered if it’s nothing extraordinary. Summerhays, no less a GOLF Top 100 Teacher, was right there with you.

Only, follow the dialogue there. Finau had seen it. He’s top 20 in the world, too. You can call him an authority.

And he was asking Abraham Ancer for an encore.

So during Tuesday’s practice round for this week’s PGA Championship, while waiting to hit a tee shot at Southern Hills in Tulsa, Okla., Ancer pinched the stem of his white, plastic ball marker with his right middle finger and thumb, twisted it into the air, then caught it with his right hand.

And there, in the palm of his hand, the ball marker spun, like a top, for 5 seconds.

Ancer, Finau, fellow pro Jason Kokrak, Summerhays, their caddies and various others laughed. Summerhays filmed it and posted the stunt on Tuesday to his Instagram story, where he also wrote: “@abrahamancer dem hands.”

“Oh, you got to zoom in to appreciate it,” Summerhays said in the video. “Oh, that’s nice.”

Ancer then tossed the ball marker up before it finished spinning, caught it, and play continued. It’s here where we would be remiss if we didn’t reshare one of our favorite spins.

At the PNC Championship last December, Tiger Woods took a ball with his right hand, flipped it forward, and it near-instantly checked on the Ritz-Carlton Golf Club practice green a yard or so ahead of him. A few seconds later, he did it a second time.

A day later, I slowed down a replay to 1/16 speed to watch. Pinching the ball between his thumb and his index and middle fingers, Woods twisted his right elbow and wrist upward as he flicked both forward to create the backspin on the ball. (Think of the motion used for a curveball in baseball.) Notably, too, he held his hand palm up for a second afterward. The first ball went no more than a yard, bounced, rolled maybe an inch and stopped. The second ball rolled less than the first.

And Brandel Chamblee did a double-take.

“Is he pretty proud of himself right there — like, check this out?” analyst and former player John Cook said.

“I would be if I could do that,” Chamblee said.

You can watch that video below.