When he crunched the numbers for the last race of Saturday’s High Rollers Handicapping Contest at Tampa Bay Downs in Oldsmar, Fla., Bill Chenvert determined 6-year-old mare Pugilist was the horse to beat in the one-mile claiming event on the turf.

Quick math also revealed Chenvert could not make enough money on the even-money favorite to win the contest. So he turned to his second choice, 4-year-old filly Caribbean Kitten, who had won her previous race and carried more generous odds of 9-2. After placing his contest wager of $100 to win, Chenvert, along with his son Brian and grandson Will, watched things unfold in the Skye Terrace Dining Room.

Pugilist moved first, but Caribbean Kitten was flying on the outside. Her 1 ¾-length victory from 12-1 shot Shes Dynomite added $570 to Chenvert’s contest bankroll, giving him $2,090 and enabling him to edge past Greg Lewis by $30 for the top spot and first prize of $17,000.

Lewis won $6,800 for second. Both men also won seats in either of the next two National Thoroughbred Racing Association National Horseplayers Championship in Las Vegas. There were 83 entries in the High Rollers contest.

“We were making a little bit of noise in the restaurant” (during the last race), said Chenvert, a 70-year-old resident of The Villages in central Florida. “It’s exciting when you win any tournament, but that was kind of an unbelievable finish. It’s just a thrill when you compete against that quality of players.”

Success in the world of big-money Thoroughbred handicapping contests is nothing new for Chenvert. He finished second to Brian, his son, in last year’s Pegasus World Cup Betting Championship at Gulfstream Park and was second in the 2019 Breeders’ Cup Handicapping Tournament at Santa Anita. On top of that, he is competing this weekend in the Flo-Cal Faceoff and the HorsePlayers BCBC contest.

Chenvert, who owns a nursery and landscaping company in The Villages with his wife, said the High Rollers Handicapping Contest more than meets his competitive instincts. “Tampa Bay Downs is kind of close by, and I enjoy the track,” he said. “The contest is easy to enter and they do a good job running everything. We look forward to playing it again.”

Chenvert got off to a rip-roaring start, collecting $1,520 in contest cash on his first wager of the contest, a $100 bet on 14-1 shot Blueyed Princess in the fourth race on the turf. He chose the first-time starter based on her bullet five-furlong workout of 1:02 from the gate on New Year’s Day at Classic Mile Training Center in Ocala.

Lewis, a Columbus, Ohio, resident who finished fifth in last year’s High Rollers, also had $100 to win on Blueyed Princess (are these guys lucky or just dang good?). Lewis said the High Rollers Handicapping Contest – which required a $1,000 buy-in – is a great option for handicappers ambivalent about paying a five-figure entry fee to chase six-figure prizes.

“It’s a good contest for the medium-to-small player,” Lewis said. “It’s well-organized, you don’t have to be a heavy player to have a shot and all the money goes back to the players. I’m extremely happy with what happened. I got more than I deserve.”

Rodriguez Barn Firing On All Cylindars At Big A: ‘We’ve Been Holding Our Own’

‘I See A Lot Of Into Mischief’: First Foal Reported For Maximus Mischief 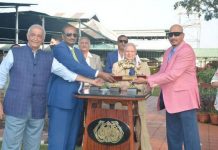