Tai’s European trip may not mark a policy shift

Good morning from Washington DC, where we seem to have traded US trade representative Katherine Tai (on her way to Geneva) for World Trade Organization director-general Ngozi Okonjo-Iweala (visiting DC).

Other than that, the town is full of visiting officials here for World Bank and IMF meetings, and all eyes are still on Capitol Hill’s wrangling over President Joe Biden’s big spending bill.

Our main piece today takes a look at Tai’s trip to Geneva, what it might mean and what we might see.

Charted waters looks at the spike in global coal prices.

We want to hear from you. Send any thoughts to trade.secrets@ft.com or email me at aime.williams@ft.com

Is Tai just a friendlier version of Lighthizer?

Katherine Tai this week makes her inaugural appearance in Geneva, home of the WTO. Her trip will include meetings with WTO member delegates there, we’re told, but she won’t be meeting Ngozi Okonjo-Iweala, who happens to be in DC instead.

It’s worth pointing out that Tai was in Sorrento for the G20 trade ministerial, so not too far away from our WTO friends. But it also can’t be ignored that her predecessor didn’t visit Geneva once in his time in post (he made his loathing of the WTO very clear). So her visit is notable.

You’d be forgiven for thinking that Tai’s visit perhaps signals a new era of US engagement with the WTO. But we think you’d be wrong. In this area, as in others, Biden’s trade policy is substantively similar to Trump’s, just presented in a more friendly way, with some suitably European air kisses.

The appellate body, which former president Donald Trump hamstrung by refusing to appoint new judges, remains jammed up. Trade diplomats complained that America could articulate why the appellate body didn’t suit them — they didn’t like that it made international laws, instead of just enforcing treaties — but it couldn’t come up with alternative ideas. That hasn’t changed under Biden.

Then there’s the negotiating function of the WTO, which is being sorely tested by the seemingly endless fisheries negotiations. The WTO’s biennial full ministerial takes place later this month, and ideally there will be something to show for it. As my colleague Alan Beattie points out from Brussels, the fisheries talks are a big test for the WTO’s consensus negotiating model, as well as seeing whether rich and poor countries can reach agreement on rights and responsibilities when it comes to something of fundamental importance to the planet. If the answer is no to that, argues former WTO official and USTR counsel Jennifer Hillman, it’ll be a bad look. “If you cannot reach an agreement after 21 years of negotiation with this big push right now, and with extraordinary people leading . . . then that is dire and it portends very poorly for the WTO.”

None of this is America’s fault, of course, but it could help by applying diplomatic pressure to the relevant holdouts. Instead, it has contributed extra portions of text aimed at combating forced labour. Important, sure. But not necessarily helpful if the aim was to wrap these talks up by the end of the month.

And then there’s the Trips waiver. The US in May made its big, headline-grabbing announcement to waive intellectual property rights on some treatments for Covid-19. But, as we wrote later that month, reaching any sort of international agreement would probably rely on US leadership and a US proposal to bridge the gap between the likes of India and South Africa on one side and the EU on the other. That hasn’t happened, and it seems increasingly apparent that the US is perhaps not too bothered if there’s a Trips waiver or not, it just wants to be seen to be vaguely supporting one.

One thing the US did do to help out the WTO was remove the US block on Okonjo-Iweala’s appointment. Bob Lighthizer refused to back the former Nigerian finance minister for the top post, leaving it without firm leadership in the middle of a pandemic. That said, we note that Bloomberg’s Geneva-based reporter writes that the DG is ready to quit if no progress can be made on big-ticket items.

We’re waiting, as ever, for a clearer articulation from the US as to why they’re not trying harder to save the global trading system while building up some brownie points in Europe. For an administration that wants to burnish its multilateral credentials, putting in a bit of effort to try and push the WTO towards a sustainable and useful existence seems like a politically palatable low-hanging fruit. Tai will make a big speech on Thursday morning on her priorities for the WTO — we’ll be watching out for any good new ideas that go beyond calls for reform.

The chart below shows that prices have fallen back slightly from where they were last week.

However, prices look set to remain far higher than they were. Chinese coal futures are still surging. That’s despite the country’s coal miners, which provide 70 per cent of its electricity, saying earlier this month that they’ll go all out to stem the energy shortages.

The Financial Times reported this week that desperate factory owners in China are increasingly turning to diesel generators to keep their businesses going. It could be a long winter ahead for the world’s exporters. Claire Jones

Business Insider has a great read looking at the supply chain logjams on the West Coast from the perspective of a longshoreman. German companies and their European counterparts are struggling to hire truck drivers.

Apple has added (Nikkei, $) Beijing-based display maker BOE Technology to its list of iPhone suppliers, a big boost for China’s tech ambitions and pressure on existing suppliers such as Samsung.

US bank chiefs have said supply chain disruptions are transitory. UK bicycle maker Brompton is not so sure, saying it will take 18 months before it can operate as it did pre-pandemic.

The FT Trade Secrets Summit returns in 2021 to engage government, policymakers, finance and business in a vital dialogue on what’s next for trade and the opportunities for business. The agenda will provide a global perspective on the latest geopolitical context, updates on governance reform and practical advice for businesses navigating a new trade order. As a premium subscriber, you can join the event with a complimentary pass when you register with the promo code: PREMIUM200

Brexit Briefing — Our essential weekly guide to the world, post-Brexit. Sign up here

Scoreboard — Key news and analysis behind the business decisions in sport. Sign up here 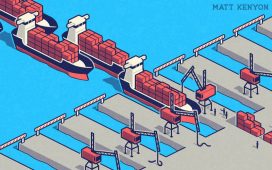 Polygenic screening of embryos is here, but is it ethical?

The dark side of wellness: the overlap between spiritual thinking and far-right conspiracies

What’s the value of a confirmatory PCR test? | David Spiegelhalter and Anthony Masters