The 50th running of the 1 1/16-mile Oaks for 3-year-old fillies was the eighth of 10 stakes, six graded, worth $1.825 million on a spectacular 14-race program anchored by one of the country’s premier Triple Crown preps, the $750,000 Curlin Florida Derby (G1). The top four finishers received qualifying points (100-40-20-10) for the Kentucky Oaks, which has been postponed from May 1 until Sept. 4 because of the coronavirus pandemic.

Ridden by Paco Lopez for trainer Ken McPeek, Swiss Skydiver ($20.20) crossed the wire in 1:43.54 over a fast main track to win for the second time in five career starts and first since her debut victory last fall in Kentucky.

Lucrezia got her nose down on the wire to edge Grade 2 winner Lake Avenue for third. It was another half-length back to 99-1 long shot Bajan Girl in fourth, followed by Spice Is Nice, Dream Marie, Tonalist‘s Shape, Spartanka, Mrs. S, Inveterate, Sunset Promise and Addilyn.

Tonalist’s Shape, sent off as the 9-5 favorite in a field of 12, suffered her first career loss in six tries that included three consecutive stakes victories. She was attempting to become just the second horse since Glitter Woman in 1997 to sweep the Forward Gal (G3), Davona Dale (G2) and Oaks – Gulfstream’s three-race series for sophomore fillies.

Swiss Skydiver, a daughter of Daredevil out of the Johannesburg mare Expo Gold, had one work at McPeek’s Summerfield Training Center in central Florida and two at Gulfstream since a third-place finish behind Finite and British Idiom in the 1 1/16-mile Rachel Alexandra (G2) Feb. 15 at Fair Grounds in her two-turn debut.“We’ve had a really hard time getting this filly to two turns. It always seemed like the timing was off on everything. We finally got her in the Rachel Alexandra in New Orleans, where she hooked a couple of really tough ones, and she needed the experience,” winning trainer Ken McPeek said. “We were almost five weeks in between races and this was real good timing. She’d been in Florida a while already, so she was real prepared for this.”

Lopez, who earlier in the day won the $100,000 Sanibel Island presented by US Foods aboard Highland Glory, broke sharply from Post 6 and found himself on an unpressured lead through fractions of 24.33 and 49.12 seconds, tracked by Lucrezia with longshots Bajan Girl and Sunset Promise in behind.

Lucrezia loomed a threat as she ranged up on Swiss Skydiver midway around the far turn, with Lake Avenue making her bid outside them both. Lopez had plenty of horse left once straightened for home and was able to open up on her rivals after going a mile in 1:37.11 and win going away.

“Paco is what I’d call a lead-forward type of jock. We jumped her out of the gate a few times to get her to leave there a little quicker. That’s kind of his natural style, so I pretty much left it to him,” McPeek said. “I definitely didn’t to take her back over that racetrack.

“It looked like to me that nobody went. They kind of gave her away, and shame on them,” he added. “I didn’t have any doubts she’d get the distance. I think she’s just going to get better with age.”

McPeek purchased Swiss Skydiver for $35,000 out of Keeneland’s 2018 September yearling sale. She ran second in her first try against winners to cap her juvenile season, then opened 2020 with a fifth-place finish in the seven-furlong Gasparilla Stakes Jan. 18 at Tampa Bay Downs.

Trainer Sharp Recovering From Surgery For Benign Tumor On Brain

Australia: Giant Fields On Tap For Group Ones On Friday

Lost And Found Presented By LubriSYNHA: Years After His Famous Bolt, Spicer Cub Has Learned To Lead — Sometimes

Without Derby, Oaks And Preakness, May Pari-Mutuel Handle Plunges 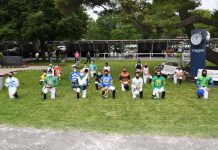