Surgery Not Always The Answer For Kissing Spines

Katelin Parsons is a barrel racer who had enjoyed competing with an off-track Thoroughbred named Monkey for six months when he was diagnosed with kissing spines.

Under veterinary guidance, Parsons had Monkey’s back injected and began a specific set of exercises designed to increase his core strength, reports Horse Nation.

Parsons noted that while she was diligent in performing the prescribed rehab, she was not as attentive to how her horse was moving during the exercises; she did not ensure that Monkey had his hind end engaged or that he had self-carriage.

When Parsons didn’t see the anticipated improvement from the rehabilitation plan, she then elected to have a surgical procedure completed on Monkey’s back to correct the areas at which the spinous processes were touching.

Though she chose to perform surgery on her horse when she felt all other options were exhausted, Parsons now regrets that decision. Parson said she followed the post-surgical protocol religiously, but Monkey was still lame behind when he returned to work. Parsons turned him out to pasture, convinced the gelding would never be sound again to ride.

A friend also dealing with kissing spines suggested to Parsons that diligent work on a lunge line – encouraging correct body shape and use – may help Monkey’s condition. Parsons read books, listened to podcasts, and taught herself to recognize correct posture and movement. She began working with Monkey, walking and trotting him on the lunge for three months.

By using himself correctly, Monkey built up his muscles and his kissing spines resolved: he was sound. Eighteen months after surgery, Parsons was able to ride Monkey again.

She said that had she been taught about proper body shape and self-carriage, she may have been able to avoid surgery. She encourages all horse owners dealing with kissing spines to investigate how they ride and work with their horse before electing surgery, because learning how to work a horse correctly may eliminate the need for a surgical intervention.

Son Of A Gun, Coeur Delion and Wall Street show out 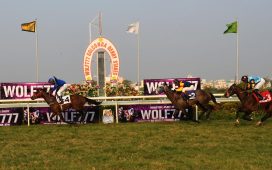