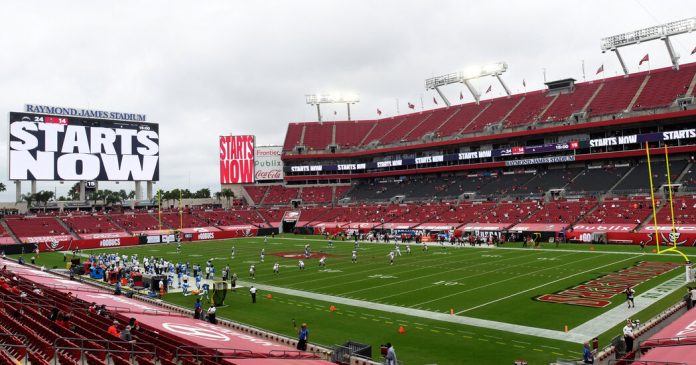 It won’t quite be the usual full house, but 22,000 seats, or roughly 30 percent of capacity, will be filled at the Super Bowl in Tampa, Fla., the N.F.L. said Friday.

About 7,500 of those seats will be occupied by health care workers who are being given free tickets by the league. Those attendees will all have been vaccinated for the coronavirus, the league said, and most will come from the Tampa area though the league will also allot tickets to workers from other N.F.L. cities.

The league said that it would sell 14,500 tickets to the game, set for Feb. 7, with the buyers selected by lottery, as in normal years, with ticket allocations for every N.F.L. team. That total does not include about 2,000 seats in luxury suites at Raymond James Stadium, the site of this year’s Super Bowl. Fans seated there will not be required to be vaccinated.

Throughout the pandemic-hit season, attendance figures varied from venue to venue, depending on local guidelines. In some cities, a significant number of fans were admitted: Dallas led the league with an average of 28,187 fans at its eight home games, followed by Jacksonville and Tampa Bay. But 13 of the 32 teams did not allow fans at any games.

N.F.L. teams drew 1.2 million fans to attend games in the regular season, well below the normal total of 17 million.

All fans who attended N.F.L. games this season were required to wear masks, and were kept apart in seating “pods,” policies that will continue at the Super Bowl. Super Bowl attendees will be given masks and hand sanitizer, the league said.

The attendance this year would be the smallest in the history of the Super Bowl, an event that in ordinary years could undoubtedly sell out many times over. The previous low was 61,946 at the Coliseum in Los Angeles for the first game in 1967, when it was still known as the A.F.L.-N.F.L. World Championship Game.

The Tampa Bay Buccaneers travel to face the Green Bay Packers in the N.F.C. championship on Sunday with a chance to play in a home Super Bowl. The winner of that game will meet the A.F.C. champion, which will be decided in Sunday’s game between the Buffalo Bills and Kansas City Chiefs.