The 20-cent Rainbow 6 jackpot pool will be guaranteed at $500,000 Sunday at Gulfstream Park in Hallandale Beach, Fla.

The popular multi-race wager went unsolved for the seventh consecutive racing program Saturday, when multiple tickets with all six winners were each worth $866.96.

The carryover jackpot is only paid out when there is a single unique ticket sold with all six winners. On days when there is no unique ticket, 70 percent of that day’s pool goes back to those bettors holding tickets with the most winners, while 30 percent is carried over to the jackpot pool.

Isolate Distances Himself in Gulfstream Feature for 2-Year-Olds
Reeves Thoroughbred Racing’s Isolate distanced himself from his five rivals in Saturday’s featured Race 10 at Gulfstream Park, where juveniles took center stage on an 11-race program that also included a pair of 2-year-old maiden special weight events in Races 1 and 5.

Isolate ($4.20) followed up his Aug. 6 debut victory with a thoroughly authoritative 8 3/4-length triumph in the six-furlong optional claiming allowance for 2-year-olds, in which he took the lead shortly after the start and drew off under Cristian Torres.

The Kathy Ritvo-trained son of Mark Valeski ran six furlongs over a sealed sloppy track in 1:10.97.

Slam Dunk Racing’s Drain the Clock ($5.20) kicked off Saturday’s program with a stylish debut victory in Race 1, taking the lead shortly after the start of the five-furlong dash and romping to a six-length score in 58.73 seconds over a sealed sloppy track. The Saffie Joseph Jr.-trained son of Maclean’s Music gave leading rider Edgard Zayas his first of four winners of the day.

Shadybrook Farm Inc’s Briella ($5.20) just held on to win after leading the way throughout Race 5, scoring by a nose in the five-furlong maiden special weight race for Florida-bred juvenile fillies. The daughter of Cajun Breeze, who ran five furlongs in 59.39 seconds, gave jockey Miguel Vasquez the first of his two winners Saturday. The Michael Yates-trained filly had previously finished second in her May 20 debut behind Princess Secret, who went on to win the $200,000 Susan’s Girl, the second leg of the FTBOA Florida Sire Stakes, Aug. 29.

‘Yet To See The Best Of Her’: Cox Sending Bonny South To Black-Eyed Susan 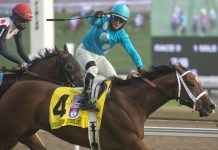 Starship Jubilee: A Lady and a Champ Wins Woodbine Mile

The Pep-Talking Groom, Willy, and a Queen’s Plate Crown