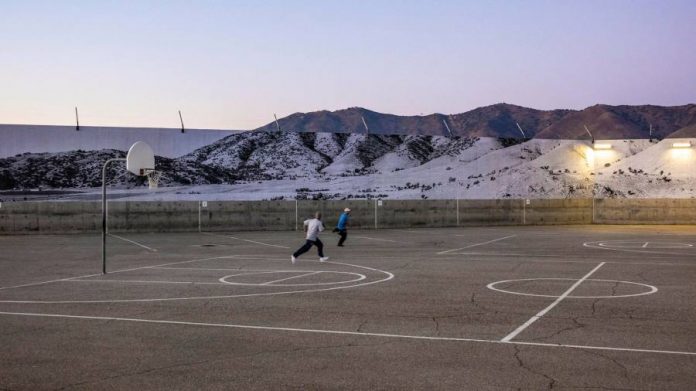 In the lower right corner of the French street artist JR’s latest collage, “Tehachapi”, Barrett Fadden is holding out a hand to the onlooker, his gaze frank and intent. Tap on his image in JR’s app, JR:murals, and a sober voice begins: “I’m not under any illusion that I deserve to be in prison,” Fadden says. “On my way to church I found out that my brother was murdered . . . And that’s the decision I made at that point to become a violent person, a criminal, because I felt betrayed.”

The image and the 29-minute recording, which recounts nearly two decades of detention time and a cancer diagnosis, are startling in their unfiltered honesty. Fadden is one of 48 men — current and former inmates, as well as correctional officers and victims of gang violence — looking up at us from the installation, which turned the yard of the maximum-security prison of Tehachapi, in California, into a whopping optical illusion in October 2019.

That original work, made from paper and laid outdoors, didn’t last long, but the exposure of the “Tehachapi” project that captured it — through the app’s audio recordings and on social media — has altered the world of its participants, some of whom were given life sentences under California’s three-strikes law.

“I laughed, I cried,” Fadden’s mother, Paula Crockford Wingate, says of the experience of listening to her son, who is working towards a bachelors degree and hoping for early release. “It was things I had never heard, you know, that he shared with JR.”

The 37-year-old JR, who started out as a graffiti artist and has never revealed his real name, has been pasting black-and-white portraits of regular people in unlikely outdoor locations for more than 15 years. He started with photos of banlieue residents around the time of the 2005 riots in French suburbs. “The first thing I noticed was people’s pride in seeing their pictures,” he says. “They were gratified to be represented differently.”

His monumental yet ephemeral installations have since taken him around the world, from Rio de Janeiro’s favelas — where enlarged photos of women’s eyes covered the outside of hillside homes — to the US-Mexico border. “Tehachapi” was documented in September at the Perrotin Gallery in Paris, and photos and videos were due to be included this month in JR: Chronicles, a wide-ranging exhibition of his work at London’s Saatchi Gallery. A new lockdown means UK visitors will have to wait for it to open, but much of the project is available to view online.

What sounds like an incredibly complex endeavour — maximum-security prisons in the US don’t typically welcome artists, unlike lower-security facilities — actually happened in a flash last year.

“A friend called to ask if I’d be interested in something like this, and I said yes, but I was doubtful we’d get access,” JR says. He describes himself as “not great at paperwork, unlike Christo”, another French artist renowned for the ambitious scale of his work. By sheer coincidence, however, the current governor of California, Gavin Newsom, had taken part in one of JR’s murals a few years earlier — and granted him a special dispensation to enter any of the state’s prisons.

JR picked Tehachapi, known officially as the California Correctional Institution, based on aerial views, which he thought had “a graphic quality”. When his creative team arrived on site, staff members were somewhat wary. “It was completely, completely out of the water for me, initially,” says William Sullivan, who was Tehachapi’s warden until a few months ago. Captain Elias Garcia, a correctional officer who was also photographed by JR, admits he thought it would be “a logistical nightmare” in what is a highly regimented institution. (Even flying a drone over Tehachapi to photograph the collage required clearance.)

Yet JR’s ability to adapt to any context — this autumn, he’s also creating sets for the Paris Opera Ballet — won the day. He credits his ability to talk as casually with prison inmates as with ballet directors to his upbringing as the son of immigrants in France: “I may have more privilege now, but I didn’t grow up privileged.” At Tehachapi, not everyone was able to take part. “The inmates were picked a lot on their behaviour and participation in good programmes,” Garcia says. When JR was first introduced to the group, he also requested that offenders whose victims on the outside “might be hurt to see them” step out, and several did.

Once the photos and audio recordings were taken, JR and his team returned to collectively paste the composite collage on the concrete yard together with the inmates — and even a handful of officers, who were persuaded to join in. “It’s a world that is meant to dehumanise, to avoid physical contact between the guards and the prisoners, to limit risk,” JR says. “My process is exactly the opposite. Since there are hundreds of paper strips to align, it brings people together with a common goal: to complete this gigantic puzzle.”

The project fed into existing efforts to break down the racial segregation within US prisons and defuse tensions. “It did show that inmates and staff alike are capable of anything,” Garcia says. “And to sit there and converse with the inmates about how they personally got to where they are, and the changes they’ve made, it starts to open your eyes.”

While they worked, JR also recorded live Instagram stories, which remain archived on his account. One inmate in particular captured the attention of his followers: 35-year-old Kevin Walsh, whose warm smile contrasts with the swastika tattooed on his cheek.

“When we come in here, we’re forced to fight for our lives against other races,” Walsh said in an Instagram story, before explaining that he regretted the symbol. “I know that if I could right now, I would remove it.”

The feedback on Instagram, which JR characterises as “95 per cent positive”, had a huge impact on Walsh, who is now on the waiting list for a tattoo removal programme. “He was filled with hope and felt like a human being again,” says his mother, Regina Martin, who remembers her shock when she first saw the swastika.

“I realised how powerful it was for them to have access to a smartphone, to share their stories and read the reactions,” JR says. “It affected them that all of a sudden a stranger would say: I have faith in this man.”

JR and his 20-strong team, who are based between Paris and New York, have since forged a long-term relationship with the prison. In February, they returned to Tehachapi to install a mural: a photo of the mountains the inmates couldn’t see behind the yard’s tall walls, also made of paper strips.

“We should use something more durable, but we don’t have the budget for it,” JR says. His endeavours are funded solely through the sale of his work. “I don’t want my projects to have a logo on them, to be supported by any foundation. I’ve always wanted to keep that freedom, which makes things much harder, because it’s now the main funding source in the art world.”

Some developments have been delayed by the pandemic, such as the art classes that, with JR’s help, Fadden is now set to lead at Tehachapi. Not all of the participants have fared well since the project — “I had a couple struggling and falling back into the gang lifestyle,” Garcia says — but a number have since been moved to a lower-security facility and are up for parole.

For families on the outside, sharing the app and the Instagram stories with friends and colleagues proved an unexpected boost. Fadden’s family had seen him make strides through other programmes, even writing and sharing poetry, but “it wasn’t something you could have in your pocket and actually listen to”, says his sister Gayle.

“There has to be crime and punishment,” Fadden acknowledges in his audio monologue. “But even at our worst, we still have value.” 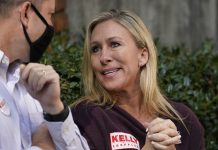 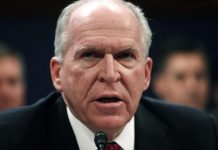 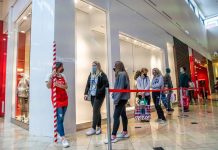 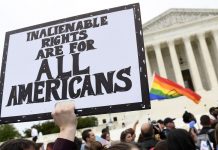