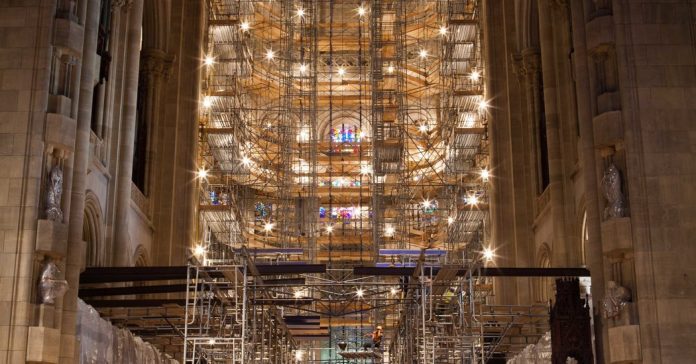 Still, oil paintings and an 18th-century icon were destroyed and other artworks damaged. And the plumes of smoke that rose up through heating vents in the floor into the cathedral’s vast interior left soot everywhere.

“It doesn’t sound so bad until you learn that smoke on stone acts as an acid,” the Rt. Rev. Clifton Daniel III, the cathedral’s leader, said in an interview on Monday.

For months, crews from Maxons Restorations have been scrubbing down walls with special heavy-duty brick-shaped sponges. Construction lifts — driven right onto the slate floor of the nave — carry them up to the 125-foot-high ceiling. With no room around the high altar to maneuver such heavy machinery, scaffolding is being installed there to put soiled surfaces within arm’s reach.

The stained-glass windows are being vacuumed, the cast-bronze entrance doors wiped down.

The cathedral, the seat of the Episcopal Diocese of New York, remains open. A rented electronic organ is providing music until the 8,035 pipes of the cathedral’s acclaimed Skinner instrument — which, incidentally, had recently been cleaned and reinstalled after a more serious fire in the cathedral in 2001 — can be packed up and sent away again for cleaning.

He hopes the cleaning of the stonework will be completed by Christmas and the cathedral will no longer look like a work site, with the organ restoration taking place next year (total cost: about $10 million).

Until then, tour buses still disgorge passengers out front. But for the duration, with so many areas cordoned off, the usual $10 admission fee has been cut in half.