SSP Chawrasia and S Chikkarangappa will be representing India at this year’s World Cup of Golf slated to be held at the Kingston Heath Golf Club in Melbourne, Australia from November 23 to 27.

Chawrasia, who represented India at the Rio Olympics earlier this month, got a late spot in the event following the withdrawal of Paraguay’s Fabrizio Zanotti.

The 38-year-old Chawrasia, a winner of four international events, including three on the European Tour, picked 22-year-old Chikkarangappa as his partner, who is a winner of two events on the Asian Development Tour (ADT).

Interestingly, both Chawrasia (world rank 234) and Chikkarangappa (world rank 439), will be making their debut at the World Cup. India will be one among seven Asian nations that will make up the elite 28-team field in Melbourne.

Chawrasia said: “I’m extremely excited about making my debut at the World Cup of Golf. It’s always an honour to represent the country. I expect our team comprising of Chikkarangappa and myself to make a major impact at the event.

“I picked Chikkarangappa as my partner as he is one of the most promising young talents in India and is in good form and high on confidence at the moment.”

Chawrasia had participated at another major team event earlier this year when he represented Team Asia at the EurAsia Cup. An elated Chikkarangappa said, “I am honoured that SSP has picked me as a partner for the World Cup. When Anirban played at the World Cup last time, I saw it on TV and started dreaming about representing my country in such a prestigious tournament. Now the time has come for me to represent India and I would do my best to make my country proud.”

India’s best performance at the World Cup of Golf came in 2005 when the pair of Arjun Atwal and Jyoti Randhawa secured a creditable ninth place finish. 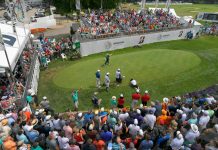 Akron out of running to fill opening on PGA Tour schedule